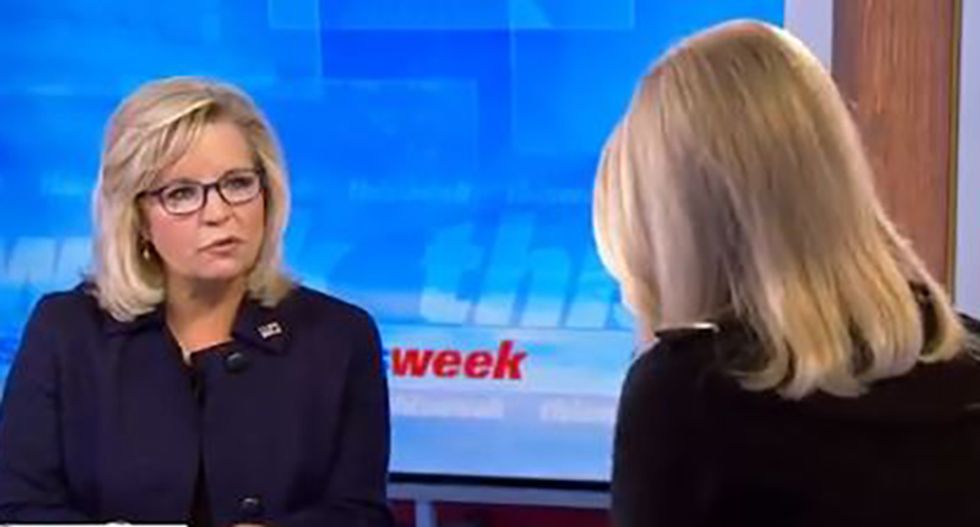 U.S. Rep. Liz Cheney's lie-filled remarks on ABC News' "This Week" supporting President Donald Trump and his false claims of "treason" have made their way to Trump himself, who just tweeted them out via a link to the right-leaning news site The Hill. The President is in Japan, having just attended a state banquet honoring that nation's new emperor.

Trump posted the article's title, "Liz Cheney: Statements by agents investigating Trump 'could well be treason'," and the article.

But Cheney's remarks, in which she claimed that the FBI's investigation into Trump and Russia, which later because the Mueller probe, "sounds an awful lot like a coup. And it could well be treason."

Cheney, the Congresswoman from Wyoming, is the third most-powerful Republican in the U.S House of Representatives.

Late Sunday, retired Air Force Colonel Morris Davis noted that Cheney's remarks were incorrect, and suggested if she were "really interested in accountability for serious malfeasance what her daddy did is a war crime."

Cheney's remarks closely echo those of President Trump himself, who has specifically accused some of treason:

“The biggest abuse of power and corruption scandal in our history, and it’s much worse than we thought. Andrew McCa… https://t.co/epia7ZUKWN
— Donald J. Trump (@Donald J. Trump)1550544839.0

My Campaign for President was conclusively spied on. Nothing like this has ever happened in American Politics. A re… https://t.co/pE1wwgJDnb
— Donald J. Trump (@Donald J. Trump)1558091505.0