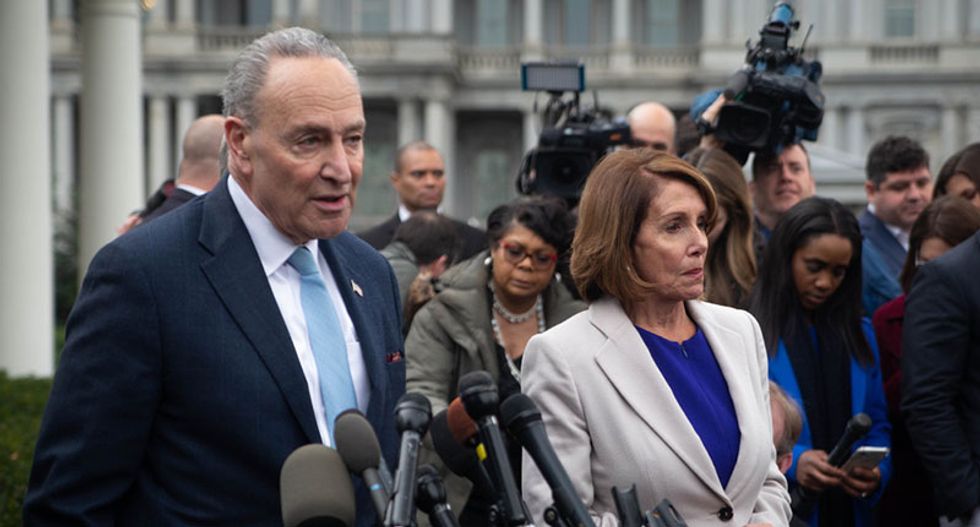 Many in the mainstream media are telling us that the “good economy” favors Trump in 2020, and the Democrats are mostly mum on the subject, with Pelosi and the neoliberals hoping an anti-Trump campaign will win the day in the next election.

But simply running against Trump won’t work.  Democrats have to refute the myth of a “good economy,” then talk about what they’re for, what their values are, and what they are going to do for the American people. Sadly, the party’s leadership seems loathe to advocate progressive values, and incapable of explaining why the economy isn’t so great.

The reason an anti-Trump campaign won’t work is because the 2020 election will be determined by turnout. Anything less than 60 percent risks a Trump victory; and failing to embrace the progressive values embraced by the majority of Americans will likely keep turnout below that.

Of course, economic policies are all about values, but as we’ll see, neither the Republicans nor the Democrats have been eager to adopt policies that implement a values-based agenda.

But before we get to values, let’s expose the myth of Trump’s “good economy.”

What you’re hearing a lot about is the unemployment rate, the stock market indices and the GDP.  And they are pretty good.  But they aren’t the whole story, and they really aren’t due to Trump’s policies.

For example, job growth started in 2009 under Obama, and it has increased steadily since then.  In fact, when you compare job creation under Obama’s last two years with that of Trump’s first two, job growth slowed down under Trump.

How about the stock market?  Here again, Obama’s numbers are much better than Trump’s, with the market going up by more than 71 percent from its low point in Obama’s first two years, compared to a gain of only 21 percent in Trump’s.

Trump has a slight edge in GDP growth, but that’s because he and his Republican allies in Congress gave the economy a short-term goose with a giant tax cut to corporations and the ultra-rich.  If past is prologue, this and the Republicans’ mania for deregulation will cause a deep recession, but not in time to save us from Trump.  But either way, the effects of the tax cut will disappear quickly, leaving a giant deficit. Besides, as many have pointed out, GDP isn’t a measure of wealth or welfare, merely a summary of the country’s gross receipts.  Money spent to counter floods, fires, famine or the liquidation of natural systems gets booked in the GDP account the same as money invested in renewable energy, advanced medical care, or investments in education.

This gets us close to the giant fallacy the press and both parties are ignoring – GDP, job growth, and the stock market don’t tell us much about individual welfare.  For example, if you put Jeff Bezos and 1,000 other people with zero net worth in a room, they’d all be millionaires on average.  And that’s essentially what we’re doing nationally, and we have been for some time now.  For example, between 1980 and 2015, the top .01 percent saw their income rise by 322 percent, while income for the bottom 90 percent rose by just .03 percent.

Now, about those jobs.  Some 20 percent of them are contract jobs having no or few benefits, and this is the fastest growing sector in terms of employment. In fact, within a decade, freelancers and contractors could make up half the American workforce.

Having a job is one thing.  Having a job that affords a decent quality of life is quite another, and fewer and fewer Americans have that.  Until recently, workers haven’t had a raise for going on four decades.  Wages finally started to go up under Obama, and they’ve continued to, but not enough to put a dent in the effects of decades of stagnation. For example, in April and March, the increases were a measly 6 cents and 4 cents respectively for the entire month. Meanwhile corporations and the one percent are still walking away with a grossly disproportionate share of wealth.

The plight of many wage earners is even worse than those grim statistics suggest.  Jobs without benefits lower our standard of living, even in the presence of the chump change raises people have managed to pry out of the hands of the oligarchy.  When you consider that in 2018 the average cost of a health care policy for a family was about  $19, 616, and employers paid $13,917 of that, two things become obvious. First, for folks who don’t get benefits, earnings are only a part of their economic story. With no retirement, no health care, no paid vacation or sick pay, they actually have to earn substantially more than someone who receives benefits to break even.  But then, with more of those new jobs going to freelancers and contract workers more and more of us are getting screwed, regardless of what the unemployment statistics and the leading indicators say.

One can imagine a skilled communicator like Reagan whipping out a few simple charts and showing Americans how the real economy is leaving them behind, and showing them how the policies embraced by government are the primary cause of this.  Of course, this is something he would never have done, but he was adept at distilling down—and often distorting—seemingly complex issues.

… the network of elites whose economic and cultural prescriptions came to be seen by myriad voters across the United States and Europe as camouflage for a self-serving heist.

And with good reason.  The neoliberals in charge of the Democratic Party pay lip service to progressive policies around election time, but govern for the elite, special interests, corporations and the rich.  And yes, Republicans are worse, but at the end of the day, too many voters seem inclined to punish hypocrisy more than straight out economic hooliganism. This means that more of those who would support Democrats are prone to stay home if Democrats present them with another centrist candidate like Hillary on election day.  Yet that’s exactly what the party leaders, the elite media, and the rest of the party old guard are doing – fostering a centrist candidate like Joe Biden who’s dragging around enough neoliberal, corporate-friendly, history to: 1) make him an easy target for Trump, and 2) alienate enough real progressives that turnout won’t be high enough to overcome the myth of Trump’s good economy.

We’re living with the lessons of 2016, and they threaten to destroy the country.  Yet somehow, that’s not enough to convince Pelosi and the rest of the neoliberal crew to run a campaign based on values like fairness, equity, economic justice, protecting our climate, assuring that democracy isn’t coopted by corporate cash, or constraining the wretched excesses of capitalism so that the people can get a piece of the pie.

Instead, the people within the party advocating these things are getting marginalized; the policies that might actualize them are getting labelled as a dream; proposals to get corporate money out of elections are being rejected; and tax and fiscal policies that attack the injustices of capitalism are being ignored.

The only way Trump can win is to keep turnout low.  The Davos Democrats are doing everything in their power to oblige him.