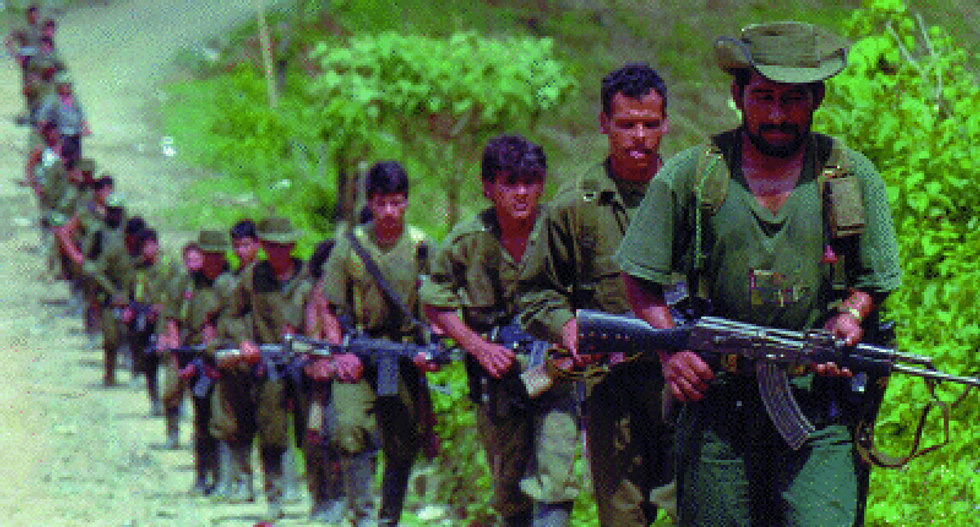 With Venezuela occupying the small bandwidth our media has for news about Latin America, there is virtually no information about Colombia, where a horrible wave of violence in the past two years has taken the lives of hundreds of social movement leaders and activists around the country, especially in places such as Cauca, Antioquia, Santander and Arauca. That’s why Colombia’s social movements organized the Humanitarian Refugee Convergence, which took place April 28-May 2 in Bogota, Colombia. It brought together over 1,000 activists from indigenous, black, women and campesino (farmer) organizations, as well as groups representing victims of Colombia’s long armed conflict, to speak out against the violence and call on the government to protect their lives.

During the Convergence, we had a chance to talk to Wilmer Castillo, a spokesperson for the National Agrarian Coordination, a group that brought campesinos from around the country to Bogota.

For people in the United States, the only issue we hear about regarding Latin America is the conflict in Venezuela. Americans, if they know anything about Colombia, might know that a peace agreement was signed with the armed groups in 2016 and they probably think that the situation in Colombia is now calm. Can you tell us what is actually happening here?

It has been falsely reported in the international press that the armed conflict in Colombia has ended. The armed conflict ended with only one guerrilla organization, the FARC. There are still two others, the EPL, the Popular Liberation Army; and the ELN, the National Liberation Army. The present right-wing government of Ivan Duque has canceled the negotiations that were going on with the ELN, which has worsened the armed conflict. Even though the FARC was demobilized and has moved into the arena of nonviolent, political struggle, creating a political party, the armed struggle continues in the places where these two other groups remain active.

Another reason to tell the world that there is no peace in Colombia is because the causes that led to the armed rebellions have not been addressed. On the contrary. There are still multinational companies that invade our lands and displace our rural communities. There are still paramilitary groups that terrorize our organizations. There is still a military strategy to consolidate the land and hand it over to the multinationals. So one of the primary reasons that the armed conflict still exists is because of the economic model that is so destructive.

To make matters worse, the government’s armed forces not only fight against the armed insurgents, but against our communities and social movements as well. Their bullets are not just killing insurgents; they are also killing the organized communities that defend their lands and try to build an alternative movement in this country. This alternative goes against the interests of the neoliberal model that has given, and continues to give, all the riches of our territory to the multinational corporations and to national private businesses. When we fight against this model, we are murdered and jailed, which is why we are organizing this Humanitarian Refugee Convergence.

What connection does the U.S. government or U.S. companies have to the conflict?

Unfortunately, foreign companies have invaded our territory and robbed our resources—oil, gold, water and now a series of minerals that they have discovered as the mining technology has advanced. There is also agribusiness. Many of these companies come from the United States. In addition to the companies that extract our resources, there is transnational private capital that sets the economic rules.

As for the U.S. government, it has interfered in our internal affairs from the time of our founding as a nation in 1810. Together, the U.S. government and companies have directly interfered in our way of life by imposing an economic model to benefit foreign interests and reinforcing that model with military agreements. I’m sorry to say that our armed forces have been shaped and trained by the U.S. military. The U.S. military has taught them how to terrorize and attack the people who rise up, how to destroy the organizations we have created to defend ourselves from the multinationals.

What is your message to U.S. activists?

We have always had support from U.S. groups and we appreciate that support. We need to build on those links and find ways to educate more people about the horrible wave of violence our people are suffering. We also have to find more ways to support your struggles. We feel an affinity for the struggles you are waging in the United States and we have always believed in the unity of peoples’ struggles around the world for emancipation, autonomy and sovereignty.

We need an alternative model globally that would allow the construction of another civilization, one that would save our planet and life itself. We, the great majority of people in the world, are victims of only one system: capitalism. So together we have to build another world, one in which all worlds fit, one in which all our rights are respected and our planet is protected. That’s the world we are dreaming about.