Neocons will not stop until they get their war with Iran 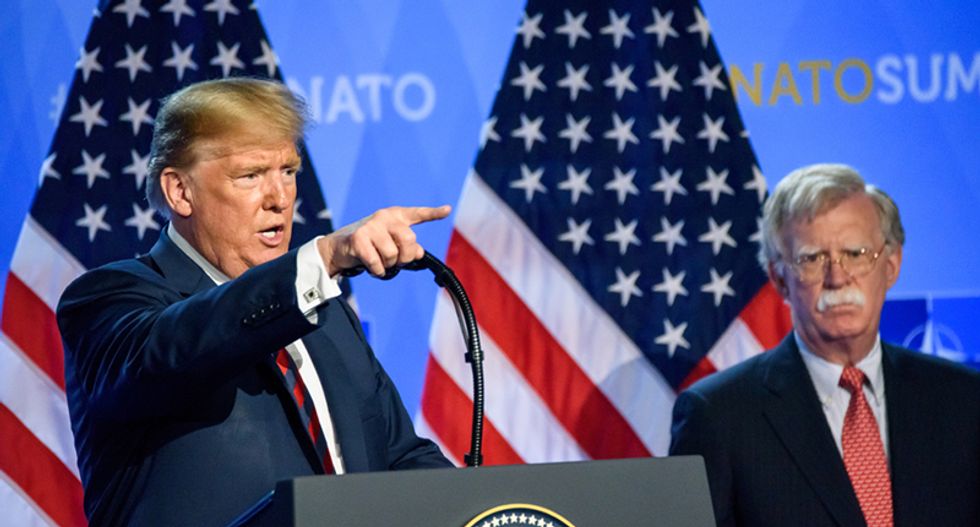 Several recent indicators strongly suggest President Donald Trump’s administration appears to be angling for a war with Iran. On Monday, The New York Times reported that the White House has been reviewing military plans against Iran. According to sources, “Acting Defense Secretary Patrick Shanahan presented an updated military plan that envisions sending as many as 120,000 troops to the Middle East should Iran attack American forces or accelerate work on nuclear weapons.”

To no one’s surprise, it was Trump’s national security adviser John Bolton who ordered the updated plan. Bolton has made it his mission to spark a war against Iran, and he was part of the apparatus of building the false case for the disastrous 2003 U.S. war against Iraq. So hawkish is Bolton that in an interview with Foreign Policy in 2007 he said, “Once upon a time, we knew how to do clandestine regime change. We need to reacquire that capability.” As the Times pointed out, Bolton’s new review of military plans to attack Iran is reminiscent of preparations made ahead of the 2003 Iraq war. Clearly Bolton is chomping at the bit a little over a year since he accepted his position at the White House.

Bolton’s war plan for Iran began with the Trump administration abandoning the hard-won Obama-era nuclear deal a year ago and imposing harsh new sanctions on Iran. In mid-April, Trump designated Iran’s elite Revolutionary Guard forces a terrorist group. It was the first time a military arm of a foreign nation was placed on the list of terrorist groups. In a statement, Trump said the designation “underscores the fact that Iran’s actions are fundamentally different from those of other governments.” Then in early May, the U.S. military sent an aircraft carrier and bomber task force on course to Iran, which Bolton announced was “in response to a number of troubling and escalatory indications and warnings.” He also made clear the military threat was intended “to send a clear and unmistakable message to the Iranian regime that any attack on United States interests or on those of our allies will be met with unrelenting force.”

Now, Saudi Arabia, whose hatred of Iran mirrors that of Bolton, is claiming that one of its oil pipelines had been attacked by a drone, causing “limited damage.” The claim Tuesday came just a day after the Gulf Arab kingdom and U.S. ally said two of its oil tankers had been “sabotaged” off the coast of the United Arab Emirates, sharing photos of damage to the hull of its vessels. Reports claim the attacks were the work of drones flown by Iranian-supported Houthi rebels in Yemen and were in retaliation for Saudi Arabia’s brutal U.S.-backed war in Yemen. So far it is not clear if Iran had any connection to the drone attacks, but with Bolton in charge of the U.S.’ Iran policy, no direct connection may be required. Even a whiff of Iranian links to aggression could be reason enough to be met with “unrelenting force.”

We’ve been here before. Seventeen years ago President George W. Bush used the infamous term “Axis of Evil,” to describe Iran, Iraq and North Korea. He claimed that Iran wanted to attack Israel with a nuclear weapon and trigger World War III. Reports emerged of the CIA funding a terrorist group in Iran, and media analysts repeatedly warned against the “impending war with Iran.”

Bolton’s last official government position before joining Trump’s White House was as U.S. ambassador to the United Nations during the Bush years. Bolton, Bush and former Vice President Dick Cheney were all part of a cohort of war hawks known as the “neo-conservatives.” A 2003 Christian Science Monitor article accurately described their agenda: “‘Neocons believe that the United States should not be ashamed to use its unrivaled power – forcefully if necessary — to promote its values around the world. Some even speak of the need to cultivate a U.S. empire.” Even more ominously, the article stated, “Neoconservatives believe modern threats facing the U.S. can no longer be reliably contained and therefore must be prevented, sometimes through preemptive military action.”

Although Bolton has been angling for regime change in Iran for decades,  there is little appetite elsewhere for war. A poll conducted last July found strong public opposition within the U.S. for a war on Iran. America’s once-trusty allies in Europe are no longer pledging blind allegiance to the United States. Negotiators working tirelessly for years to craft the Iran nuclear deal alongside U.S. representatives are now desperately trying to salvage what’s left of it after Trump withdrew. Ahead of an Iran-centered meeting this week in Brussels, Britain’s Foreign Secretary Jeremy Hunt warned, “We are very worried about the risk of a conflict happening by accident, with an escalation that is unintended really on either side.” Secretary of State Mike Pompeo decided at the last minute to attend the meeting uninvited but failed to convince Europe that Iran was deserving of war.

Pompeo had just as little luck in Iraq when, during an impromptu visit to Baghdad last week, he attempted to convince Iraqi leaders that Iran was a threat. Prime Minister Adel Abdul Mahdi retorted, “Iraq is building its relationships with all on the basis of putting Iraq’s interests first,” and that his goal was to maintain balanced relationships with “friends and neighbors, including neighboring Iran.”

The recent deployment of the military carrier toward Iran was purportedly in response to “specific and credible” intelligence that Iran was targeting U.S. forces in Iraq and Syria. Yet a British officer stationed in Iraq, who is part of the coalition forces there, told reporters Tuesday during a video news conference at the Pentagon: “No, there’s been no increased threat from Iranian-backed forces in Iraq and Syria.”

Still, none of this seems to deter Bolton or Trump. When asked about potential war with Iran, Trump told reporters, “We’ll see what happens with Iran. If they do anything, it would be a very bad mistake.” His threats are part of a pattern of aggressive language toward Iran since he took office. Joining in the collective sense of imperial hubris are Republicans like Arkansas Sen. Tom Cotton, who said in an interview that the U.S. could defeat Iran militarily in just “two strikes, the first strike and the last strike.”

Americans vehemently opposed the 2003 Iraq war, and hundreds of thousands protested in cities around the country in conjunction with millions of others worldwide. But Bush and his neocon allies did not care about public opposition, evidence of a real threat, or much else. They simply wanted war with Iraq, and they waged it willfully, destructively and chaotically, leaving a bloody trail of hundreds of thousands of deaths and political and regional instability.

Logic will not deter the Trump bullies. Neither will a history lesson. With Bolton back in a seat of power and pushing our unhinged president toward war with Iran, we may be on the precipice of yet another deadly military disaster.