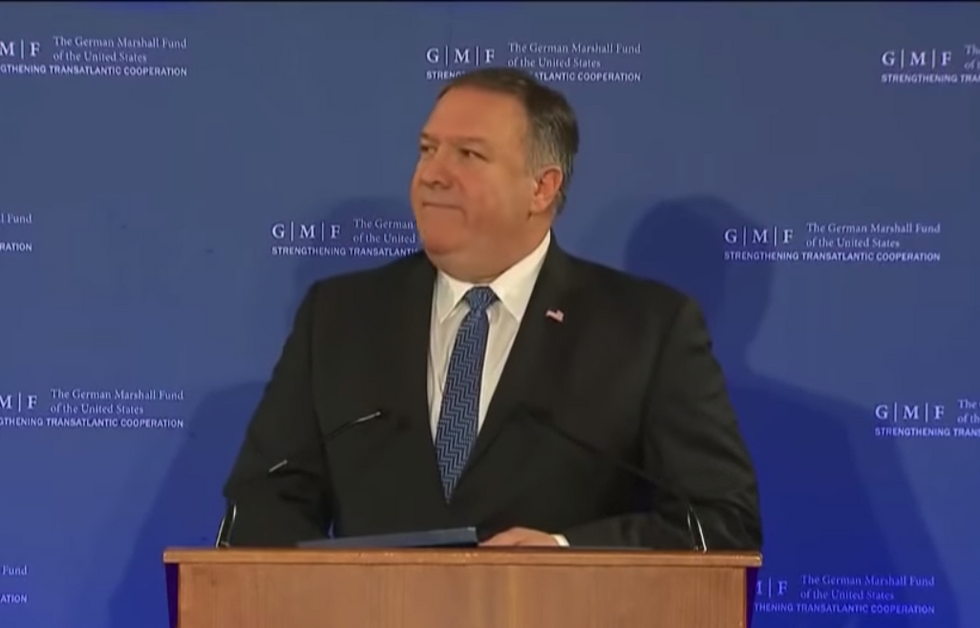 Secretary of State Mike Pompeo has never been terribly worried about climate change, but in a new speech to the Arctic Council Ministerial Meeting in Finland on Monday, he seemed to be arguing for the upside of rising global temperatures.

"Steady reductions in sea ice are opening new passageways and new opportunities for trade. This could potentially slash the time it takes to travel between Asia and the West by as much as 20 days," Pompeo said. "Arctic sea lanes could come before – could come the 21s century Suez and Panama Canals."

The optimistic gloss on the changing climate — though Pompeo never used the words "climate change" or "global warming" in the speech — ignores all the devastating impacts of the shifts brought about by the world's use of fossil fuels.

For example, in a press release last year on the decline of Arctic sea ice, an expert in the region explained how the effects of global warming compound on themselves and endanger the local wildlife:

“This summer, the combination of thin ice and southerly warm winds helped break up and melt the sea ice in the region, reopening the hole,” said Melinda Webster, a sea ice researcher with Goddard. “This opening matters for several reasons; for starters, the newly exposed water absorbs sunlight and warms up the ocean, which affects how quickly sea ice will grow in the following autumn. It also affects the local ecosystem; for example, it impacts seal and polar bear populations that rely on thicker, snow-covered sea ice for denning and hunting.

The world has already lost much of the thick Arctic ice that helped the region remain stable, largely replaced by thin ice that varies much more over the course of a year. The melting ice can contribute to sea level rise and extreme weather events.

The Trump administration, of course, has downplayed or ignored all these dangers. The president often talks about climate change as a hoax. It's despicably cynical for Pompeo to only discuss the commercial upsides of a warming climate.

And when Pompeo actually did address environmental policy in the speech, it was only as an excuse for chest thumping and attacks on China:

Look, the facts speak for themselves: America is the world’s leader in caring for the environment. Our energy-related CO2 emissions fell by 14 percent between 2006 and 2017. The rest of the world’s rose by more than 20 percent during that same time period. Our black carbon emissions are down 16 percent since 2013 and are on track to drop by nearly half by 2035, the best of any Arctic country. Meanwhile, it isn’t clear that Russia is reducing emissions at all, despite being the largest emitter of black carbon in the entire Arctic.

The United States is achieving our reductions the American way: through scientific work, through technology, through building out safe and secure energy infrastructure, and through our economic growth, and doing it in a way that doesn’t stifle development with burdensome regulations that only create more risk to the environment.

Conveniently, Pompeo omitted key facts. As the people at Carbon Brief have pointed out, the United States is far and away the biggest contributor to total global carbon emissions since the beginning of the industrial age:

That means the U.S. bears the bulk of the responsibility for the warming we have seen thus far and are likely to see soon, even if the country is finding ways to reduce emissions. Yet Pompeo even exaggerates these achievements.

Under Trump, the United States has pulled out of the Paris Climate Accord, the only agreement that brought the world together in a collective effort to bring down total emissions. And Pompeo's claim that emissions fell between 2006 and 2017 left out the most recent data from 2018, which suggests that the country's emissions have actually ticked back up again, showing the second-largest annual increase since 1996, according to the Rhodium Group. For an administration obsessed with taking credit for any the positive indicators of the country's economic strength and wellbeing, it is happy to bend over backward to ignore the more concerning figures.