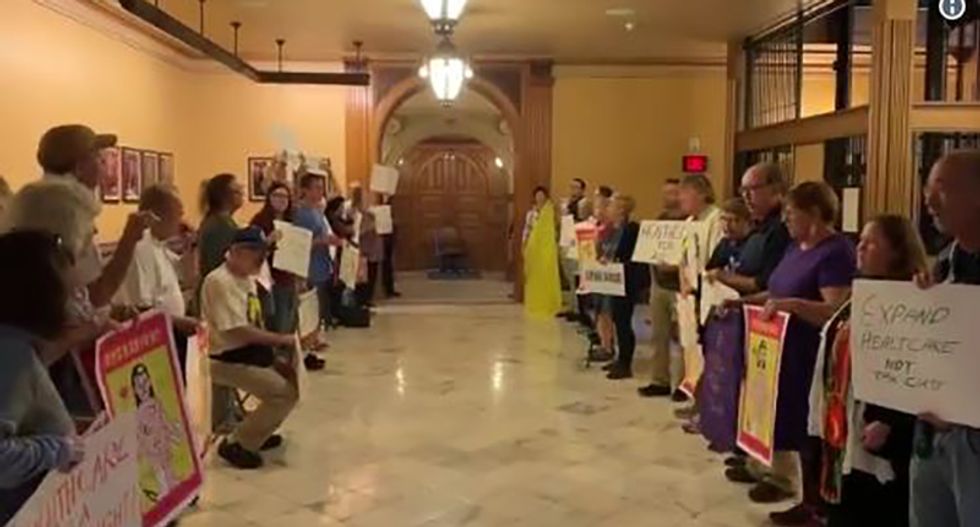 The Washington Post declares that “Democracy Dies in Darkness.” Today in the Kansas Senate, Republican Senate Susan Wagle moved to turn out all the lights, tossing Pro-Medicaid expansion protestors from the gallery and removing all major press. Using members of the state capital security staff, senate press from major newspapers were removed from the Senate floor, the doors were locked, the gallery was closed, and Republicans punished the public — not just by refusing to address Medicaid Expansion but by welcoming the use of strong arm tactics against the press in attempts to cover the workings of the state house.

A reporter for the Topeka Capital Journal summed it up this way:

Senate president's staff explained that news reporters were evicted because we were giving an audience to protester… https://t.co/D1oP182uNH
— Sherman Smith (@Sherman Smith) 1559146498

Protestors were arrested, the press, who sought to cover the event, were ejected and refused all access to know what was happening — and when they asked, they were told they could not see them or be made aware.

What were they so afraid of? Organizers on behalf of Medicaid Expansion sat outside of the Senate and Senate Galleries and sang for their lives:

“We are gentle angry people and we are singing for our lives” - Kansans outside Ks Senate Chamber asking for Sen.… https://t.co/QIMnFCNrb9
— Davis Hammet (@Davis Hammet) 1559141971

The disruption in the Senate was much similar, but began with a prayer: “Lord hear our prayer, we need healthcare”, Republicans, apparently upset with the idea of prayer for healthcare — as opposed to prayer for policies that punish women and others — sat to shut down the praying Kansans.

Untold is that many of those who had planned to be in the State Capital protesting today were unable to do so — because a separate group of protestors from Lawrence, Kansas, took their day to help tornado victims in areas of Northeast Kansas, providing water, comfort, and working toward shelter for many Kansans who were displaced.

Reporters, who hoped to get back into the chamber were denied all access and protestors were threatened, some arrested, and the business of the state was, for a time, conducted in complete darkness.

Reporters were informed that if they reported on or covered the protest, they risked having future access and credentials revoked — in other words, Republicans didn’t try to just shut the press out, they tried to blackmail the Kansas City Star, The WIchita Eagle, The Capital Journal, The Associated Press with their ability to gain future access unless they refused to report an actual news story.

Memorial Day was the celebration of the lives of those who  paid the ultimate sacrifice for the rights of our nation. And two days later, in the Kansas State Capital, Republican leadership did everything possible to shred those rights.