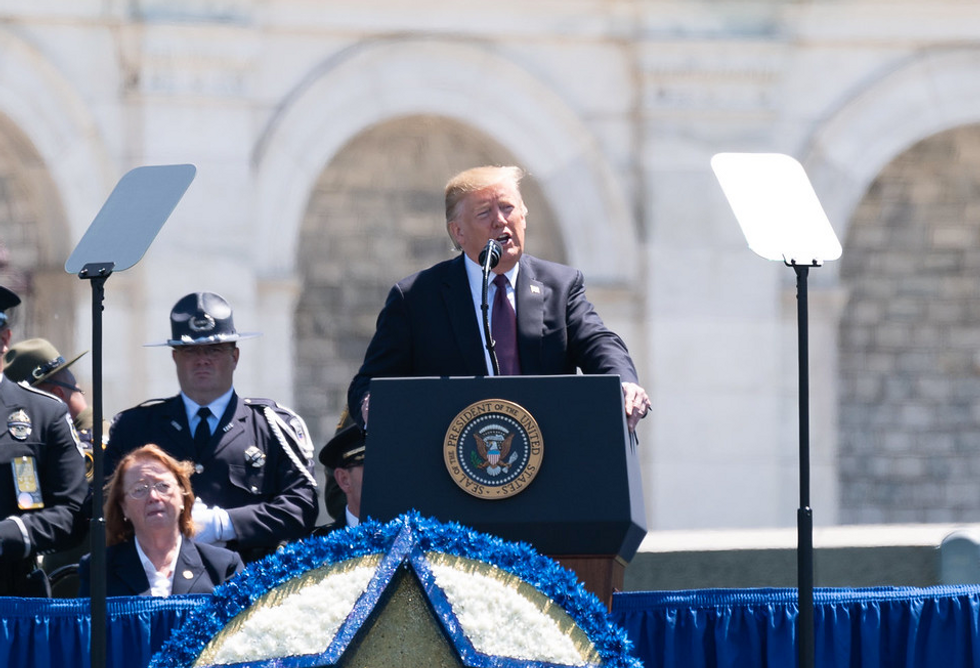 Wavering for some time on the verge of becoming a complete oligarchy, America is on the verge of flipping from a democratic republic to a strongman or autocratic form of government, something that’s happened to dozens of democracies in the past few decades, but never before here. It’s possible we won’t recover from it.

The death of a republic is different from the death of a nation; Rome was a nation for nearly 2,000 years, but its period of being a republic was only around 300 years long. For the rest, it was a brutal empire with a small but wealthy and corrupt ruling class and a thin patina of democracy-for-show.

Trump is openly defying the norms and laws of our republic, while calling for the imprisonment of both his political enemies and members of the very law enforcement agencies that might hold him to account. And he’s only able to do it because billionaires like Rupert Murdoch, with Fox News, and the billionaires Republicans depend on to fund their re-elections are providing him with cover.

And they’re largely able to do that because five “conservatives” on the Supreme Court empowered billionaires to own the political system with the 1976 Buckley and 2010 Citizens United decisions.

Already, it is evident there are similarities between the end of the Roman Republic and America today when it comes to political theater. In the Roman Republic, the question of what was “real” or “fake” was decided by the people and common sense until the republic began to splinter in the first century BCE. Once the political/power cracks appeared, truth and lies became a constant matter of debate. Today we have a reality-show president who has told over 10,000 lies, many uncritically repeated daily by the media and others aggressively defended by politicians owned by the same billionaires who support Trump. Trump is constantly at war with the truth and “fake news.”

Republics die when the price of losing political struggles becomes higher than individual politicians are willing to pay, so they just roll over in favor of the interests of whoever is most powerful. Republics die when compromise is seen as betrayal, and a single principled vote, position or statement is enough to cause donors and party to turn their back and end a political career, or even end a person’s ability to earn a living.

In Rome, after the republican phase ended in the first century BCE with the assassination of Julius Caesar, it often meant physical death; in America today it means political and economic death, but the dagger at the heart of what the founding fathers called our “republican form of government” is no less sharp.

A republic falters because it ceases to be functional and democratic—meeting the needs of the people and being governed by the people—when behind-the-scenes plutocrats, warlords, or corporations achieve near total—and nearly invisible—political/financial dominance over the visible political process.

This failure of governance and plutocratic takeover is followed by threats of overwhelming political destruction, and, in the final stages, violence often takes over.

That was when, in 1933, the Weimar Republic became the Nazi tyranny; in 1938 when Mussolini dissolved parliament and replaced it with the Chamber of Fascist Corporations; in 1980 when Augusto Pinochet replaced Chile’s constitution with one that banned opposition political groups; in 2016 when President Erdogan of Turkey brutally responded to a coup attempt. Recently we’ve also seen it in Russia, the Philippines, Brazil, Hungary, and Poland.

The forces driving the death of our republic include Trump trying to prosecute those who investigated him for his campaign’s Russia ties and his disavowal of the rights and powers of the first branch of American government, the Congress. Fueling the process for nearly two generations are the right-wing billionaires funding politicians who tolerate the promotion of deadly white supremacist violence, all in the pursuit of lower taxes, higher profits, and a dog-eat-dog political ideology that doesn’t let average people get their needs met through the political process.

The disintegration of the Roman Republic began, writes Edward J. Watts, the author of Mortal Republic: How Rome Fell Into Tyranny, in the years around 100 BCE when politicians became rigidly bound to their patrons and thus refused to compromise, raising the cost of normal political activity to a level where egalitarian governance became a sham. Instead of disagreeing with each other, Roman politicians began to prosecute each other and fund reactionary “populist” forces.

Watts told me that the consequence, over the next century, was political violence and the end of the republic; by the time of Augustus, Rome had become an autocratic, plutocratic empire and democracy was dead, even though the iron-fisted empire would last another 1,400 years, finally petering out (no pun intended) as the modern Catholic Church.

When politicians are terrified that the wrong statement or vote will lose them their political and financial patrons—or could even get them thrown in jail or killed—they cease to be players in a republican democratic drama, and instead become sycophants to and enablers of the plutocrats who have the actual political power, even though they don’t hold office.

This is the position elected members of the Republican Party find themselves in today relative to the billionaires and industries that own them, and the white supremacists and religious zealots they’ve invited in as allies; the future of our democratic republican form of government will depend on whether they continue to encourage this poison, or reject it.

The modern Republican Party has, since the Reagan era, stood exclusively for making the very rich much richer, privatizing Social Security, ending Medicare and Medicaid, gutting food stamps and other programs to help those in poverty and the working poor, increasing levels of poison and pollution in our air and water, and turning our entire school system over to for-profit vultures.

These are all pretty unpopular positions, so to get elected the GOP has pulled together a coalition of white supremacists, gun fanatics, and religious zealots who want total control over women and their bodies.

That’s nearly enough people to win the occasional election, but the real force behind the modern GOP are the plutocrats, the billionaires who fund everything from “conservative” think tanks, to super PACs (and their social media troll farms), to billion-dollar media buys.

Republican politicians now live in such fear of these billionaires and the corporations who made them rich that they’re unwilling to acknowledge simple science like climate change or the impact of industrial pollution on children.

These are the signs of a dying republic.

Into this moment in history comes Donald Trump, going after the walls and floors of our political house with a sledgehammer. Institutions that were treated with respect and even reverence are ridiculed as “weak” or “useless” by Trump; the hard-right billionaires cheer him on and keep writing checks to the GOP.

These are the symptoms of a republic in crisis.

There’s a lot of hand-wringing going on in the press and in D.C. about Trump’s political and legal excesses. What everybody seems to be missing is the permanent damage he’s doing to our republic by finding the loose floorboards under our republic, the loopholes and norms of political behavior that have been enforced for centuries out of good will and respect, rather than fear of the law.

Like a petulant child or a juvenile delinquent, he delights in breaking them right in front of us.

Nixon didn’t want to turn over the tapes, but when the courts told him to, he complied. Hillary Clinton didn’t want to testify for more than eight hours about Benghazi, but when Congress demanded it, she showed up. These have been American norms since the presidency of George Washington.

It’s entirely possible that Trump and Attorney General Bill Barr are right that Congress now has no real means to enforce their subpoenas and requests for testimony and documents; if so, it’s been that way since the founding of the republic.

Our government has functioned from one administration to another since its founding not because presidents and members of Congress were afraid of going to jail; things have held together because our politicians have, almost without exception, honored the institutions of our nation, even when they didn’t need to fear them.

Our Constitution, in many very real ways, is rather weak when faced with parties or persons who flaunt its norms, or won’t use the tools it provides to ensure accountability.

There was, for example, no jail cell waiting for Mitch McConnell when he refused to allow President Obama’s Supreme Court nominee Merrick Garland to even have a single hearing. Nobody had ever done such a thing because there’d never in our history been a Senate majority leader with so little respect for our nation and our Constitution, or so much loyalty to a small group of billionaires.

But now there’s a man in the White House so craven in his lust for personal wealth and power, and so owned by fossil-fuel interests, bigots, and religious fanatics that he’s willing to exploit that weakness in our Constitution to take an ax to the roots of our tree of liberty.

He is our nation’s Augustus Caesar, the killer of a republic and the herald of a corrupt and collapsing empire.

He’s willing to break laws in public and dare Congress to hold him responsible, while starting an “investigation” into those concerned about a foreign power breaking our election laws to make him president. He openly praises thugs and killers, both foreign and domestic, and delights in pardoning war criminals.

America will not “bounce back” from the Trump presidency when it ends, and may lose all ability to recover at all if that presidency lasts six rather than two more years.

If Republicans in the Senate are too cowardly to repudiate the petro-billionaires who threaten to fund their primary opponents, we will continue on the rapid downward slide Rome experienced in the first century BCE.

And if Democrats don’t take strong, immediate, and decisive action to curb GOP excesses, we may well never again have a chance to return to our democratic-republican roots.

Democrats “getting a spine” isn’t just good politics; it may be the last hope to salvage our republic and preserve our constitutional form of government.

Thom Hartmann is a talk-show host and author of more than 25 books in print. He is a writing fellow at the Independent Media Institute.