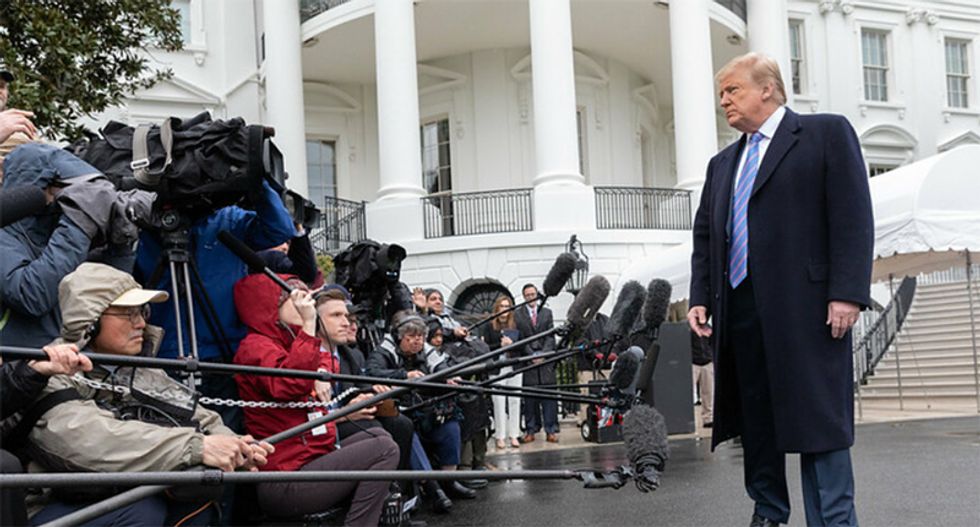 Before he suddenly resigned from office in August 1974, President Richard Nixon was in the process of being impeached by Congress. One of the charges leveled against the Republican president was that he had unlawfully obstructed congressional investigations into the Watergate break-in, among other alleged misdeeds. The Articles of Impeachment accused Nixon of having "prevented, obstructed, and impeded the administration of justice." That included "withholding relevant and material evidence or information from lawfully authorized investigative officers and employees of the United States," as well as "interfering or endeavoring to interfere with the conduct of investigations by Congressional Committees."

Refusing to obey legal congressional subpoenas constitutes obstruction of justice, which is why it was featured so prominently in the impeachment proceedings. Today, Donald Trump is doing the same thing by embracing a radical, unheard-of strategy to refuse all legal congressional requests in an effort to deny the co-equal branch of government its ability to conduct traditional oversight. But instead of depicting Trump's war on transparency and democracy as the possibly impeachable offense that it is, much of the press coverage couches the obvious obstruction as a partisan "showdown" between Congress and a "defiant" president. It's a process story!

Once again, the Beltway press is failing to accurately describe what's unfolding in plain view. They’re leaning on timid language to depict Trump's radical behavior and the constitutional emergency he’s creating, using words like "defy," "standoff," "feud," "resist," "skirmish," "disputes.” In doing so, news accounts mostly avoid using the words that most accurately describes what's happening: "obstruction" and "crisis." And let's be clear, it's not a "standoff" between the White House and Democrats. This is the entire Republican Party supporting Trump's effort to completely bury congressional oversight as it's been practiced for more than two centuries in America.

Indeed, what's become obvious is that Trump's White House has decided it is above the law and that no outside body has the right to conduct oversight and to provide the country with checks and balances, as the Founding Fathers required. The framers of the Constitution knew that effective oversight required separation of power, as well as checks and balances, which Trump is now trying to eviscerate while the press calls it a "feud" with Congress. (The New York Times columnist David Brooks portrayed Trump's obstruction as a Both Sides issue, blaming Trump and Democrats equally.)

The White House's blanket obstruction of Congress is happening on several key fronts. Trump is ordering his former White House counsel, Don McGahn, not to hand over documents related to Robert Mueller's Russia investigation. During the probe, McGahn spoke to Mueller at length and told him Trump had ordered McGahn to fire Mueller, effectively ending the Russia investigation, but that McGahn had refused. After the Mueller report was released, Trump denied the claim and now doesn't want McGahn to tell his side of the story.

As for the Mueller report itself, Trump is demanding that the unredacted findings not be sent to members of Congress, and he's also insisting that Mueller himself not testify before Congress. This comes as Attorney General William Barr has done everything in his power to run interference for the White House on the Mueller report, from initially misrepresenting what the findings were to outright lying to Congress. House Democrats last week voted to hold Barr in contempt, but CNN's Chris Cillizza quickly downplayed the significance of Barr becoming only the second U.S. attorney general to ever be voted in contempt by Congress. (I.e. nothing to see here, folks.)

And then there are Trump's tax returns that Democrats recently demanded, using a longstanding IRS statute that gives Congress the power to request any citizen's tax information. The White House has obstructed Congress's demand. In terms of accuracy, this is what a proper headline would have looked like: "Trump administration defies federal law, refuses to hand over tax returns." Instead, we saw lots of media coverage about how the White House politely "denied a request" to comply with the legal request. But that's now how laws work in this country, and that's not how the headlines should work, either. For instance, young men didn't "reject" or "deny" requests to get drafted during the Vietnam War. They broke the law if they refused to serve. Why does the White House obstructing a legal congressional demand for documents get treated as a friendly rejection?

The press, which was completely inept during the 2016 campaign in pressuring Trump to release his taxes, now shrugs its shoulders as the White House defies federal law and refuses to give the tax information to Congress. Indeed, weeks ago the press signaled that it wasn't very concerned by the obvious obstruction surrounding Trump's taxes. "Treasury says it will miss Democrats’ deadline for turning over Trump tax returns, casts skepticism over request," a low-key Washington Post headline announced last month, leaving the clear implication that the congressional demand for Trump's tax returns is somehow optional, or open to debate. (That's precisely the message the White House is trying to sell.)

But reporters know that's not the case. "Under the tax code, the head of that committee can get any taxpayer’s returns and otherwise-private files from the Internal Revenue Service," the Times has explained. "The law doesn’t give the administration any discretion, requiring that the Treasury secretary “shall furnish” any returns."

Legal experts are in heated agreement, as well. "This is not an issue on which there is any possibility of reasonable disagreement," Daniel Shaviro, a law professor at New York University, told Vox. "Any well-informed person who disagrees either that the Ways and Means Committee has an obligation to demand Trump’s tax returns as part of fulfilling its oversight duties or that Trump is legally obliged to turn them over is either a partisan hack or contemptuous of the rule of law."

So why is there so much deferential, he said/he said language in reporting on the White House's clear obstruction with regards to the tax returns and its blanket refusal to comply with congressional subpoenas? It's not merely a "dispute." It's full-on obstruction—and at least one president has been driven from office for doing the exact same thing.