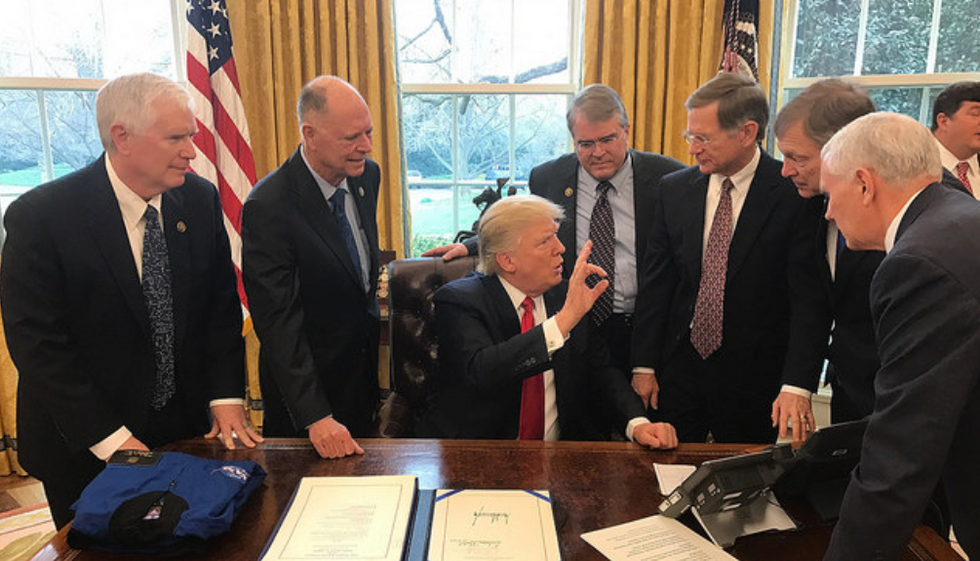 In a brutal blow to Attorney General Bill Barr's defense against Special Counsel Robert Mueller report, a whopping 390+ former federal prosecutors have signed a statement arguing that President Donald Trump would have been charged with obstruction of justice were it not for the protection from indictment afforded to him by virtue of holding office.

The names on the statement encompassed a wide range of the legal community who have served for both Republican and Democratic administrations, showing the bipartisan recognition of Trump's crimes. And as reporters Nicole Perlroth of the New York Times and Rebecca Ballhaus of the Wall Street Journal noted, there were several particularly interesting names on the list.

Ayer was former deputy attorney general, appointed by former President George H.W. Bush in 1989. The number of Republican appointees signing on to the statement is notable, as it shows this is not a mere partisan attack on a GOP president. But Ayer is also significant because of his successor as deputy attorney general. One Bill Barr replaced Ayer when he vacated the role, only to later be elevated to the position of attorney general by Bush Sr. for the first time. Trump made him attorney general again this year, in an apparently deliberate and successful effort to find someone who would shield him from Mueller's damning findings.

Martin is a former U.S. attorney and then federal judge for the Southern District of New York. He was appointed as a federal judge by the first President Bush.

Abramovitz, noted Ballhaus, was once the chief of the criminal division in federal prosecutors office in the Southern District of New York. But even more interesting is what he's doing now. Abramovitz represents David Pecker, the head of American Media Inc., who is a key witness in the criminal hush money payments made for the Trump campaign in 2016 for which Michael Cohen has pleaded guilty. In Cohen's allocution in the case, he said he carried out these criminal payments in coordination with and at the direction of Trump. It's notable, then, that someone so deeply involved in that case is calling Trump out for another set of crimes.

A prominent conservative legal scholar, Rosenzweig is also notable for having served as senior counsel to Ken Starr during Whitewater and the resulting investigations. Starr, who famously pursued President Bill Clinton doggedly and pushed for impeachment, now says Trump shouldn't be impeached because it was bad for the country. But Rosenzweig disagrees.

Harris worked under Rudy Giuliani, who now represents Trump, when he was associate attorney general in President Ronald Reagan's Justice Department. In his outlandish and often damaging defenses of the president, Giuliani has frequently and hypocritically railed against tactics he used as a prosecutor, even while facing off against the much more considered and reasonable Mueller. The fact that one of Giuliani's former subordinates now publicly contests his main defense of the president only underscores the complete and shameful about-face he's undergone since taking on Trump's case.