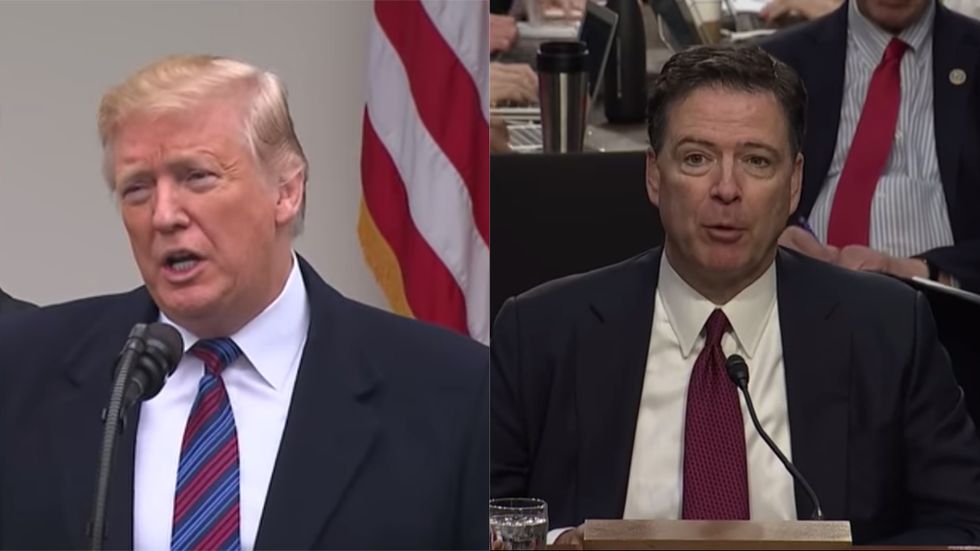 In the ongoing effort to distract from President Donald Trump's corruption and lawlessness, Republicans and right-wing media are joining his calls to denounce the FBI, claiming that the Russia investigation was a "coup" against him.

The claim makes little sense on its face, since the investigation that FBI launched of Russian interference in the 2016 election, which turned into Special Counsel Robert Mueller's investigation, could not have been a "coup." Trump wasn't even president when it launched. And ignoring this fact, the only way it would result in Trump being removed from office is through the application of Congress's impeachment powers, which is not a coup but an orderly transition of power in a democratic system (which would, in any event, leave in place Trump's hand-picked vice president.)

But the idea that the FBI and intelligence community was plotting a coup against Trump, based loosely on some angry texts and a lot of distorted and baseless claims, has taken hold on the right. And it's not likely to dissipate any time soon. With that in mind, readers should consider the following facts, all of which rest on uncontroversial evidence, that decisively show that the idea that the FBI was working to block Trump's presidency is nonsense:

1. The FBI, via James Comey, almost certainly threw the election to Trump.

The most obvious reason we can infer that there wasn't an FBI conspiracy to undermine Trump's chances at getting elected is that, by all appearances, it did the exact opposite.

Instead of torpedoing Trump's chances, FBI Director James Comey damaged Hillary Clinton's shot at the presidency by announcing, less than two weeks before Election Day, that it was reopening the investigation of her emails. Trump certainly thought this news helped him at the time because he celebrated it and touted the re-opening of the probe. At the same time, when Trump later fired Comey, he used the director's mistreatment of Clinton as a justification for the termination. So not only did Trump admit that Comey's actions were helpful to him, he has admitted that they were wrongful. (FiveThirtyEight's Nate Silver, analyzing the polling, concluded that Comey's decision indeed likely cost Clinton the election.)

It's a startling state of affairs that the GOP can base an entire conspiracy theory — which often focuses on Comey as a key enemy of Trump — that flies in the face of one of the most significant historical events in recent memory.

2. The FBI was not specifically investigating Trump until he fired Comey.

Now, you might say that, even if Comey tanked Clinton's chances, at least some members of the FBI were plotting against Trump. Citing a cryptic text message between FBI employees Peter Strzok and Lisa Page, the conspiracists sometimes argue that the investigation of Trump was an "insurance policy" against the chance he became president. So perhaps they assumed Clinton would win as most people did, but they wanted to keep the investigation open to use as a weapon against Trump if he turned the tables.

But then there's another unfortunate fact for this theory: As Trump had once boasted, there was, in fact, no FBI investigation of him specifically during the 2016 campaign. The FBI was investigating certain members of Trump's team — several of whom have since gone to prison — but not Trump himself. Trump wasn't put under investigation until months later when he fired James Comey.

3. There appeared to be damaging leaks out of the FBI — about Clinton.

There's also the fact that, based on comments made by the person who would become Trump's lawyer, Rudy Giuliani, the FBI seemed to be leaking damaging suggestions about Hillary Clinton. As the Washington Post reported at the time:

Rudy Giuliani told Fox News’s Martha MacCallum on Oct. 26 that Donald Trump had “a surprise or two that you’re going to hear about in the next two days.”

“I’m talking about some pretty big surprise,” he said.

Two days later, FBI Director James Comey revealed to Congress that his agents had resumed their investigation of Hillary Clinton’s use of a private email server while she was secretary of state, after agents in an unrelated case discovered emails that could potentially be relevant to the server case.

These comments, which Giuliani later clumsily walked back, later triggered a leak investigation.

I was concerned that there appeared to be in the media a number of stories that might have been based on communications reporters or nonreporters like Rudy Giuliani were having with people in the New York field office. In particular, in I want to say mid October, maybe a little bit later, Mr. Giuliani was making statements that appeared to be based on his knowledge of workings inside the FBI New York. And then my recollection is there were other stories that were in the same ballpark that gave me a general concern that we may have a leak problem — unauthorized disclosure problem out of New York, and so I asked that it be investigated.

And [Comey] said, and he said to me that it had become clear to him, he didn’t say over the course of what investigation or whatever, he said it’s clear to me that there is a cadre of senior people in New York who have a deep and visceral hatred of Secretary Clinton. And he said it is, it is deep. It’s, and he said, he said it was surprising to him or stunning to him.

4. The investigation of Trump's campaign was largely kept secret.

Despite urging from lawmakers, Comey kept the investigation of Trump's campaign secret during the 2016 campaign. Some of the details about the investigation leaked at the time, but they were also heavily spun in Trump's favor, with the New York Times printing the notorious headline on Oct. 31, 2016: "Investigating Donald Trump, F.B.I. Sees No Clear Link to Russia." It's second paragraph said:

Law enforcement officials say that none of the investigations so far have found any conclusive or direct link between Mr. Trump and the Russian government. And even the hacking into Democratic emails, F.B.I. and intelligence officials now believe, was aimed at disrupting the presidential election rather than electing Mr. Trump.

It's clear from the story that, though the reporters had stumbled on something very real, at least some portion of its FBI sources were trying to tamp down and discourage the reporting. The report does not at all suggest that FBI agents were trying to conduct a hit job on Trump through anonymous leaks. It claimed multiple times that the FBI believed Russia's efforts to interfere in the election were not designed to help Trump, though the bureau would later conclude that, in fact, that was part of the intention.

5. At the same time that the FBI was investigating the Steele Dossier, it used oppo research to pursue another investigation of Clinton.

One of the biggest gripes Republicans have about the Russia investigation was its supposed reliance on the infamous Steele Dossier, a collection of raw intelligence documents from a former British intelligence agent that made a range of inflammatory and lurid claims about Trump's ties to Russia. Because this was funded as opposition research against Trump, the GOP argues that its use by the FBI was illegitimate. However, the extent of its use by the FBI in the probe is still unknown, and the even the House Intelligence Committee, at a time when it was run by Republicans, admitted that the investigation had already begun before the bureau received the dossier.

However, during the same period of this investigation, the Clinton Foundation became the subject of an FBI inquiry that was spurred largely, it seemed, by a book called "Clinton Cash." That book was itself a long-form version of opposition research, designed by opponents of Hillary Clinton to hurt her electoral chances. The idea that referring oppo research against Trump in any way was somehow a major partisan breach, while the same thing happened to Clinton, strains credulity.