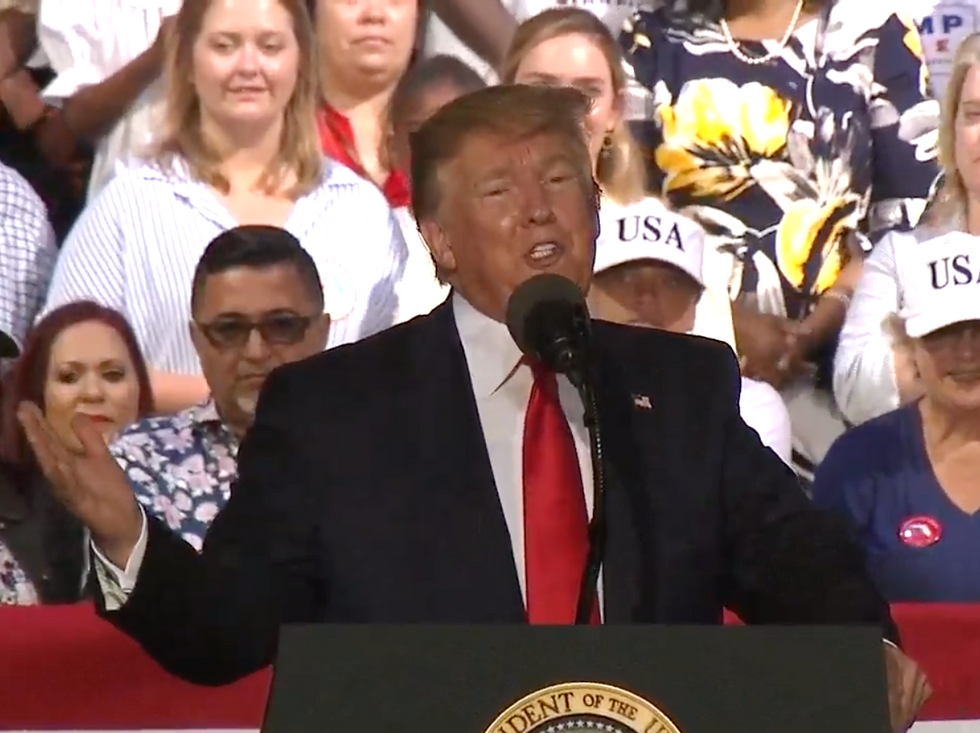 President Donald Trump held a campaign rally Wednesday night in Panama Beach, Florida — and as usual, the event was a disturbing and unsettling glimpse into the dark relationship Trump has cultivated with his supporters.

Throughout his speech, he lashed out at immigrants, Democrats, and people he believes are his personal enemies.

Here are 5 of the most deeply disturbing moments:

At his rally tonight, Trump says the government is unable to violently attack immigrants, someone in the crowd shou… https://t.co/HqsPU0jiQ3
— jordan (@jordan) 1557364469

This was probably the moment that attracted the most attention because of its vile and open appreciation of violence directed against immigrants, many of who are asylum seekers and families. The fact that the president has convinced his followers that such people would deserve to be shot — and that saying so openly at a political event is OK — shows the acceptance of depravity that is a central part of his political message.

"The president, who spent the day defying the other two branches of government, thinks it's hilarious that a member of the crowd suggested murdering families fleeing violence," tweeted former Office of Government Ethics Director Walter Shaub. "The hate-fueled mob of 'fine people' surrounding him explode into uproarious laughter and falsetto hoots."

Trump has recently been amping up his rhetoric about abortion, spinning outrageous fantasies to rile up his pro-life supporters. This kind of misinformation has the potential to inspire real violence in the world against doctors and women who seek abortions.

Trump brings up his disturbing kidnapping fantasy about women being taped up and smuggled across the border in cars… https://t.co/HvRcMvFooZ
— Aaron Rupar (@Aaron Rupar) 1557365423

The president loves making up these kinds of stories, but experts say they are extremely uncommon. And despite his rhetoric, Trump does nothing to actually help these women. Instead, he uses such stories to sell the narrative that unlawful forms of violence are necessary at the border.

When Rep. Ilhan Omar (D-MN) made comments that played into anti-Semitic tropes, Republicans launched a ceaseless attack on her that continues to this day, despite her apologies and clarifications. Trump, on the other hand, constantly whips up bigoted tropes and stereotypes that have repeatedly inspired violence — his smear about immigrants being an "invasion" is just one of his most vicious slanders — but he has faced no pushback from his party.

The chants of "lock her up" have become much more disturbing since Special Counsel Robert Mueller revealed that Trump really had pushed former Attorney General Jeff Sessions to go after Hillary Clinton behind the scenes, which some have argued was itself an impeachable offense.