George W. Bush may be the only person in the world who can force Trump out of office 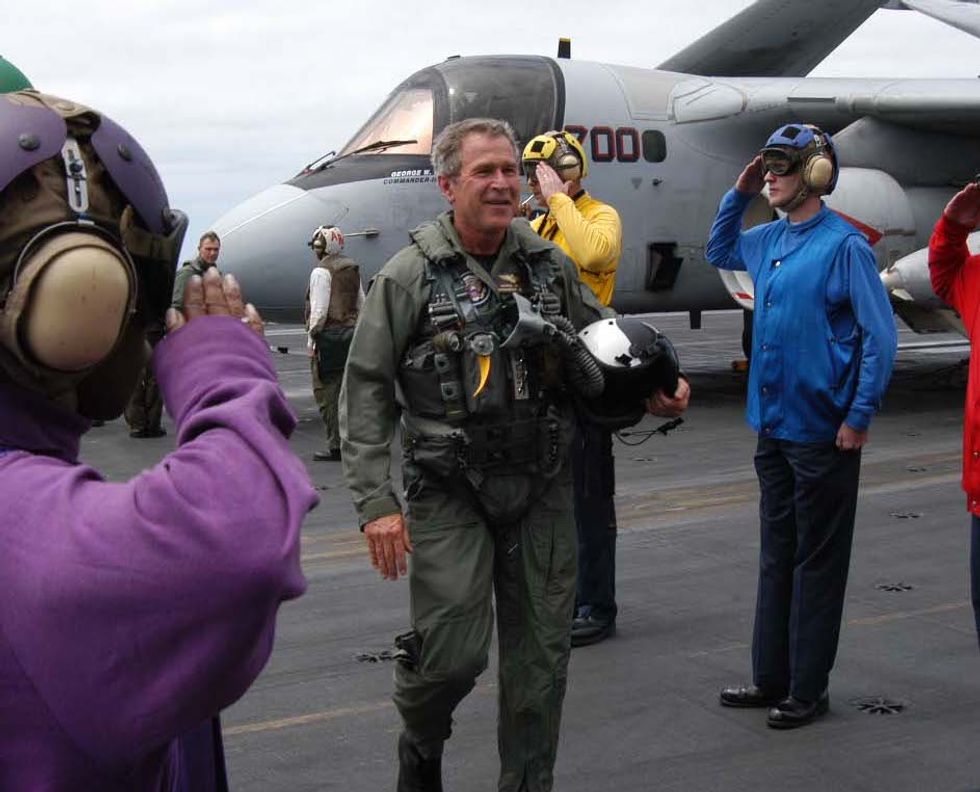 030501-N-6817C-049 Pacific Ocean (May 1, 2003) -- President George W. Bush passes through the "side boys" after a successful trap aboard the USS Abraham Lincoln (CVN 72) in a S-3B Viking assigned to the Blue Wolves of Sea Control Squadron Three Five (VS-35) designated "NAVY 1". President Bush is the first sitting President to trap aboard an aircraft carrier at sea. The President is conducting a visit aboard ship to meet with the Sailors and will address the Nation as Lincoln prepares to return from a 10-month deployment to the Arabian Gulf in support of Operation Iraqi Freedom. U.S. Navy photo by Photographer's Mate 3rd Class Tyler J. Clements. (RELEASED)
David Cook MartÃ­n
,
DC Report
,
DC Report
and
David Cook MartÃ­n
May 04, 2019

History has not been generous to you. Your adventure in Iraq is the greatest overseas blunder of U.S. history. Your stewardship of the economy resulted in the greatest financial disaster since the 1930s.

Your deep historical deficit, in any circumstances other than what we face today, should relegate you to the lowest rung of U.S. presidents.

The Crisis Before Us

Our government is embroiled today in as serious of a constitutional crisis as it has ever seen. No, it’s not the Civil War. It’s not the 1952 steel strike. It’s not federal troops escorting black children to school. It’s not Watergate.

You, Mr. President, are the only person in the country with the moral authority and the political influence to stop Trump’s dismantling of our republic.

But just as each of those moments in history pivoted around disputes over the fundamental structure of our government and its powers, so too, now, are we participating in a great moment when our basic belief in the primacy of the law and our allegiance to the separation of power between Congress and the Presidency are being tested.

Never has this been so clear as on Wednesday, May 1. The attorney general, the nation’s top law enforcement officer, argued in the Senate Judiciary Committee like a hired-gun defense attorney representing a Mafia boss. It was a performance historians will heap scorn upon for a century. James Comey’s remarkable essay in Thursday’s New York Times says it all: William Barr has sold his soul, piece by tiny, shriveled, unredeemable piece.

Unlike your grandfather, your father, you and the rest of the Bush family, Barr has shamed himself, his children and his children’s children. He has betrayed his oath and the Constitution.  As a devout Catholic, he will have to answer to his Lord for betraying his country, a sin that puts him in the Ninth Circle of Dante’s Hell.

I’m sure he’ll take comfort in that there will plenty of modern-day Republicans there with him.

That he, and they, have so deeply wounded our republic is inarguable. Senate and House Republicans have enabled and abetted a man who believes he can govern the country by monarchial fiat, as Trump has long run his family’s now four-generation criminal enterprise. He embraces bigotry. He incites violence. He ignores Congress. He insults the courts. He flouts every check and every balance imposed on his office. That is the constitutional crisis of our time.

Mr. President, you know Trump must go. He must be impeached. He must be tried and convicted in the Senate and removed from the White House. He and his family and his entire crime syndicate must be hauled before the courts, indicted, tried, convicted and imprisoned. He and his family must be broken. Made destitute. Reduced to begging on the streets. Anything less, and they will use their remaining millions of dollars to march across the country, rousing Trump’s minions and imploring them to finish off our government and Constitution. Donald Trump is the enemy of the people.

Today, you, Mr. President, are the only person in the country with the moral authority and the political influence to stop Trump’s dismantling of our republic. Other Republican leaders won’t do it. They demonstrated over the first two years of the Trump era that they have no honor, no integrity and no fealty to our way of government. And no Democrat can pierce the miasma of right-wing propaganda to muster the moral outrage of Republican voters and Trump’s MAGAloids. They will dismiss any calls for Trump’s removal made by Nancy Pelosi, Charles Schumer, Bill Clinton, Barack Obama, any Democrat now on the national stage.

Ronald Reagan himself could rise from the grave like Marley’s ghost to warn of the coming catastrophe, and it would not move Trump’s base supporters.

Which is why you, George W. Bush, 43rd President of the United States, are the last man at the Alamo of the American republic.

You would be a 21st Century Cincinnatus, who served, retired and then served again when the Roman republic needed him. You still stand tall in Republican, conservative and evangelical circles, Mr. President. Your voice denouncing Trump and calling for his removal from office could not be ignored. And you can provide political cover for Republican senators and representatives who privately agree but have not been able to speak out or stand up to Trump’s bullying.

Yes, former presidents are not supposed to criticize their successors. But Trump has so trashed the Presidency that you have to step up and speak, Mr. President. The future demands it.

Before any formal impeachment action, Speaker Pelosi could invite you to address a joint session of Congress, giving a “State of the Republic” speech outlining Trump’s unfitness for the office and calling upon Congress to put the nation first and to do its duty to remove Trump from the Presidency.

The evening would not look like a coup, but a united, institutional re-statement of America’s republican principles.

In attendance: All members of the House and Senate, the Supreme Court, the three other living former presidents, all 50 governors, distinguished former congressional, executive and judicial branch officials (especially retired Republicans such as former cabinet members James Baker and George Shultz and former Senate leaders like Bill Frist, and Trent Lott) and representatives of democratic governments around the world.

Pointedly, however, the guest list should exclude Trump—along with the Vice President and current cabinet members who have already abdicated their responsibilities under the 25th Amendment.

To be sure, there is no love lost between Trump and your family. Some Trump supporters will argue you are just settling scores. Maybe Rush Limbaugh will get bent out of shape, though it’s hard to imagine how since he and other right-wing commentators are as fond of you as they are of Trump.

But you, Mr. President,  a genuine Christian, have the religious authority to call out Trump’s immorality and to check the cynical support he receives from fake religious leaders like Franklin Graham and Jerry Falwell Jr. You are loved by blue-collar Republicans. You can appeal to the marginalized Republicans who have never felt comfortable with Trump. The left will embrace you as a hero.

Today, Mr. President, you are destined to languish in the depths of history, a minor president who squandered his moment.

But rise to the now, Mr. President. Take on this challenge. Today, take this instant, this moment in history, and you can redeem your and your family’s legacies.

Lead the march to stop this tyrant, Mr. President, and history will forever know you as the Savior of the Republic.