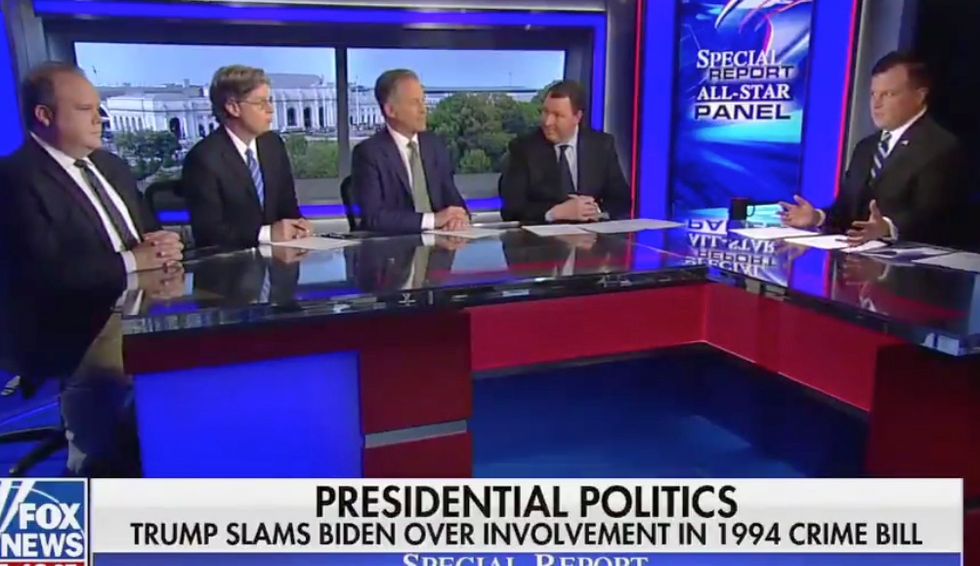 President Donald Trump was highly critical of 2020 Democratic presidential candidate and former Vice President Joe Biden during a recent visit to Japan, where he met with Prime Minister Shinzo Abe. Trump even went so far as to say that North Korean dictator Kim Jong Un had better leadership skills than Biden, describing Jong Un as “very smart” and Biden as someone with a “low IQ.” And Trump was lambasted for his anti-Biden remarks during a Monday-night panel discussion on Fox News, which is generally quite favorable to the president.

The panelists on Fox News’ “Special Report With Brett Baier” included the American Enterprise Institute’s Marc Thiessen, the Washington Post’s Charles Lane and the Washington Examiner’s Byron York. Thiessen called Trump out not for criticizing Biden, but for where and how he did it.

“You don’t attack political opponents from foreign soil,” Thiessen asserted. “You’re supposed to be out there as America’s chief diplomat. And two, you don’t cite the murderous dictator of North Korea as evidence of why Biden is a bad candidate.”

Lane concurred with Thiessen, saying, “I do agree with Marc that it was shameful.”

York commented that Trump’s anti-Biden comments in Japan underscore “the enormous place that Joe Biden is occupying in the president’s worldview at the moment. He sees Biden’s lead in the polls. He remembers his own experience where he led almost wire to wire, which is not really the way it always works. But he looks at this Democratic field and says, ‘Who else is it going to be?’ So he’s absolutely fixed on Biden.”

York added that Trump “should not be doing this in Japan. It looks bad.”

Trump’s anti-Biden comments in Japan have drawn criticism on other cable news programs as well. On MSNBC’s “Morning Joe” on Tuesday, conservative Joe Scarborough denounced Trump’s comments as wildly inappropriate and noted that the Dixie Chicks were banished from country radio in the 2000s after criticizing President George W. Bush outside of the United States. And Scarborough, a former Republican congressman, also recalled that in the past, he gave Sen. Harry Reid hell for criticizing Bush abroad.

In Tokyo, Trump remarked, “Well, Kim Jong Un made a statement that Joe Biden is a low IQ individual. He probably is, based on his record. I think I agree with him on that.”