Carl Bernstein explains how Bill Barr abandoned his role as AG to serve the president: 'Trump said he wanted his Roy Cohn — he’s got him now' 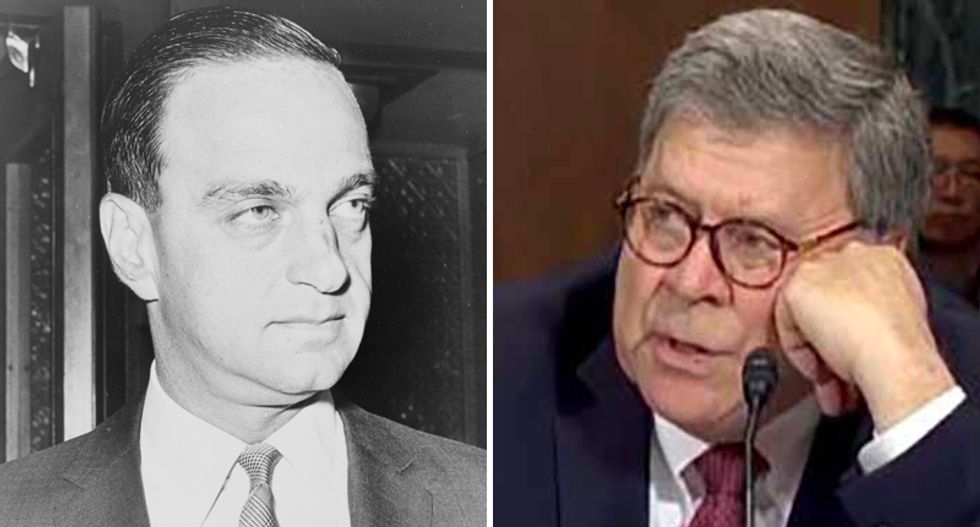 As detailed in special counsel Robert Mueller’s report, in March 2017, Trump told former White House counsel Don McGahn to lobby Sessions to remain in charge of Russia probe. According to the New York Times, when McGahn was unable to persuade Sessions to stay on Trump “erupted in anger in front of numerous White House officials, saying he needed his attorney general to protect him.” Per the Times:

Mr. Trump then asked, “Where’s my Roy Cohn?” He was referring to his former personal lawyer and fixer, who had been Senator Joseph R. McCarthy’s top aide during the investigations into communist activity in the 1950s and died in 1986.

Recalling that report on Sunday, Bernstein explained Trump now has a Roy Cohn in his current attorney general.

“We find ourselves in this situation, right now, because there is an on going coverup by the president of the United States,” Bernstein explained. “Whether that constitutes a violation of law, whether he is a criminal or not, that’s for down the road but right now it’s obvious to anyone that watches, anyone who looks at the facts, reads the Mueller report — the obstruction part particularly — we are in the midst of a continued coverup by the president, aided abetted by the Attorney general of the United States.”

“Trump said he wanted his Roy Cohn, he’s got him now in the attorney general,” Bernstein added.

Bernstein described the crisis as “systemic,” not constitutional, arguing Trump’s conduct is “challenging whether our institutions are able to function in this country to deal with the president of the United States who is unique in our history, who has nothing but contempt for democratic tradition and the rule of law.”

“So really where the rubber is going to meet the road is going to be the Supreme Court of the United States and Chief Justice Roberts has got his table being set for him in a way that may have an awful lot to do with the future of American democracy,” Bernstein added.

Watch the full interview below, via CNN: