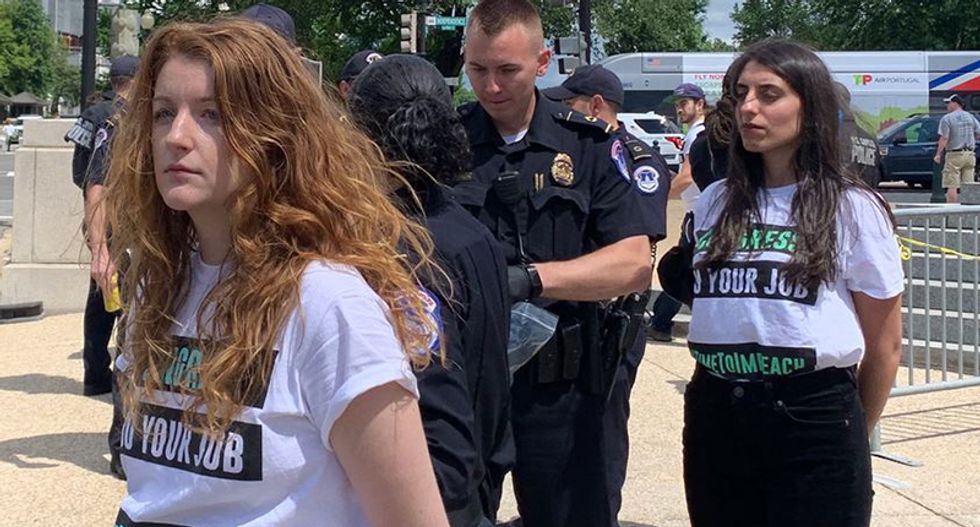 By the People Twitter image from rally
Julia Conley
and
Common Dreams
May 15, 2019

At least 20 people were arrested in the rotunda of the Cannon House Office Building on Tuesday as they participated in a sit-in to demand that President Donald Trump be impeached.

Dozens of protesters from across the country came to Washington for the action. The grassroots groups behind the sit-in, By the People, tweeted from the scene that Capitol Police began making arrests just two minutes into the demonstration.

Meanwhile, the group wrote, many Americans "have been waiting over two years for Congress to do its job and impeach."

"It's been two years of Trump's corruption, abuse of power, violation of our Constitution, and attacks on our democracy. It took two minutes to arrest protesters, so why two years for this?" said By the People.

Before the arrests began, the demonstrators displayed a sign reading, "If Congress won't defend the Constitution then we the people will."

"What's it going to take to impeach Trump? It’s going to take all of us," said By the People organizer Anthony Torres in a statement. "We, the people, must hit the streets and enter the halls of power in the thousands. Congress will not fulfill their constitutional duty until the constituents they depend on to stay in office force them to put us over party politics.”

Forty-five percent of Americans support impeachment proceedings against the president, according to a poll released last week by Reuters/Ipsos—more than the number that backed the move before a Congressional committee passed articles of impeachment against President Richard Nixon in 1974.

"Today we take action in D.C. to defend our democracy and our people," Alexandra Flores-Quilty, another organizer with the group, said in a statement. "We are a part of the millions of Americans who support impeachment...[Lawmakers] put party before country, and political calculations over their oaths of office. Today we say no more. Congress, you are on notice—it is time to impeach."