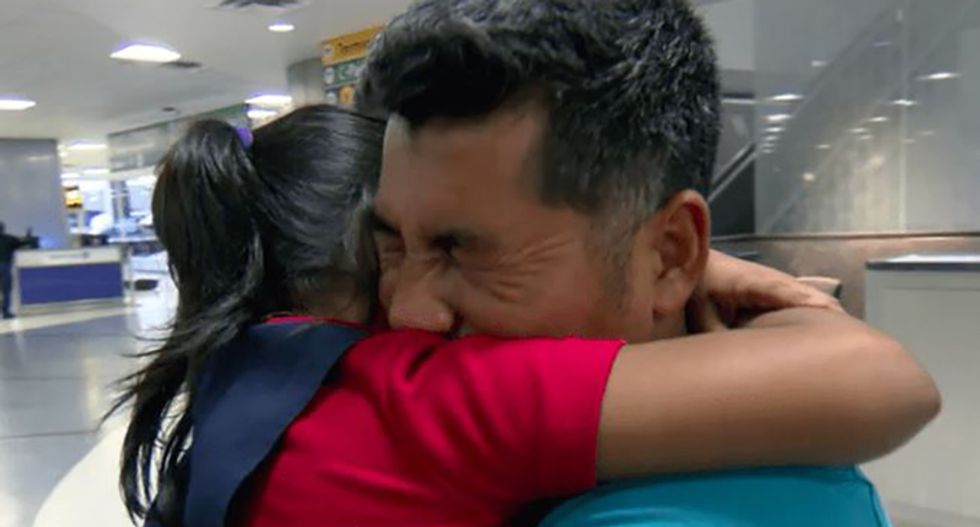 Three hundred and twenty-six days. That’s how long 7-year-old Angie and her dad, Adelino, spent separated after the Trump administration tore their family apart at the southern border last June. “When they were separated,” CBS News reports, “she was asleep in his arms. He doesn't know if she even knew what happened.”

What happened is that Angie was one of the thousands of children that were stolen from parents by federal immigration officials under the barbaric “zero tolerance” policy. The cruelty was the point: kids were taken with no process set in place on how to ever reunite them with their parents and families.

In Angie’s case, when she was finally released from U.S. custody, she wasn’t returned to her dad, but rather her mom, who “she hadn't known her since she was a baby.” Adelino, an asylum seeker who has raised Angie on his own, “could request to be reunited, but only at the risk of putting her back in detention.” Adelino had been jailed at Adelanto, a privately operated prison that has frequently failed surprise inspections. He finally got his freedom when an immigrant rights advocacy group stepped in to pay his $8,000 bond.

“The next day, he flew to Texas to see her again.” Angie spotted her dad as he was coming down the escalator and, smiling, pointed at him. “How are you, my love?” he asks as he rushed for an embrace. Both became overwhelmed, with tears streaming down the child’s face. “We’re together now, my love,” he reassures her after sitting down. “No one will separate us now.”

Adelino said that while they’re now reunited, he’s struggling to comprehend what she went through and how he can ever explain what happened to them, and why. “If I, at 40 years old, got the feeling like I was going crazy, the suffering at her tender age, her young mind, I can't even imagine,” he said.

They’re not alone: while a federal judge ordered a stop to this humanitarian disaster last summer, border officials have exploited a clause in his ruling in order to separate hundreds of additional families, even falsely accusing some parents of gang ties. In one instance, border officials even falsely accused one dad who was fleeing gang threats of gang affiliation. They were separated for 11 weeks. Family separation remains a crisis.