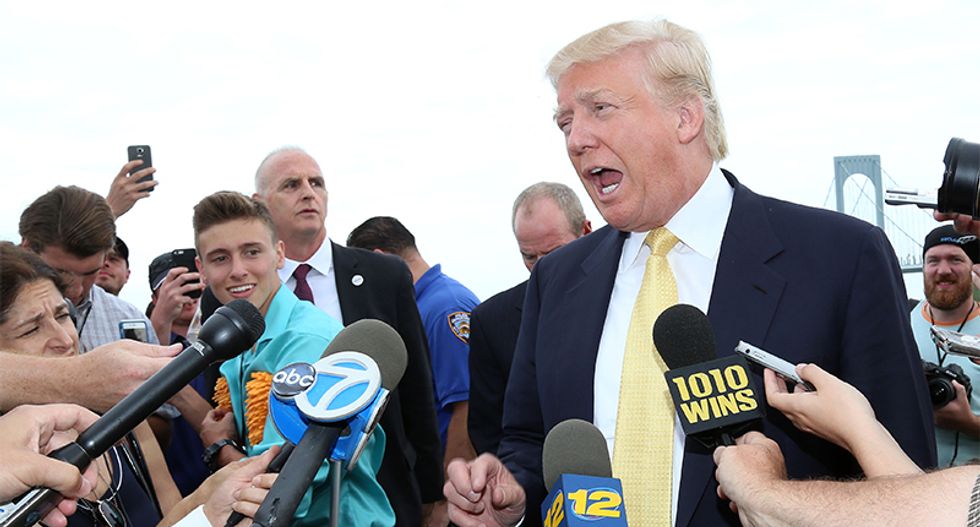 Purging the Department of Homeland Security; cheering the cover-up of the Mueller report while claiming federal prosecutors who investigated Russia collusion were guilty of treason; defying a lawful order to turn over his taxes; ordering the Department of Justice to launch criminal investigations into perceived enemies; wishing he could unleash "rough" U.S. soldiers on women and children seeking asylum in America; promising pardons to border officials who break the law; aggressively subverting the independence of the Federal Reserve by nominating two obviously unqualified board members; and inciting violence against a sitting member of Congress.

That was Donald Trump's recent week, as he clearly escalated his war on democracy and democratic institutions in America. Increasingly, though, it looks like the press simply isn't equipped to deal with his radical and dangerous foray into authoritarianism.

"This is how democracies die. The rule of law is slowly strangled. The unthinkable becomes commonplace. The illegal becomes accepted--from violations of the emoluments clause to self-dealing to Federal election law crimes to serial sexual abuse," tweeted David Rothkopf, a professor of international relations. "We are dying the death of a thousand cuts. Right now, this week, the president and his band of thugs are winning. They have become unabashed in their attacks on the law."

And the press is playing a central role in this dangerous demise. It’s been part of allowing the unthinkable to become commonplace, and last week provided many stark examples. Trump's brazen, anti-democratic behavior becomes more pronounced, and as he appears to operate without the slightest concern of the press for holding him accountable, it seems the American news media doesn’t understand, or won't acknowledge, what is happening, and the dangers that democracy faces. They don't know much about covering authoritarian regimes, or how to respond to them, and they're too busy treating Trump's spectacle as a reality TV show.

"So many ‘Savvy Washington Insiders’ and ‘fair journalists’ are actually in on the con," Sen. Brian Schatz of Hawaii lamented last week on Twitter. "They know one side is absolutely bonkers but they are deeply, personally attached to the fake objectivity that allows them to be blind to cruelty and racism manifested as public policy."

Those racist policies were on full display with regard to the southern border last week. After musing about permanently closing the U.S.-Mexico border, Trump threatened to separate refugee children from their parents when they came across the border, urged officials to ban asylum-seekers from entering America (contrary to U.S. law), promised pardons to those who did, and wished the U.S. military could be more "rough" with migrants seeking shelter in America, completely unconcerned that a founding principle of American democracy is that the military is not allowed to enforce domestic U.S. laws without specific authorization from Congress. (That's why the troops Trump has sent to the border as part of the "national emergency" are not allowed to apprehend anybody.) Then came word that the administration had directed the Department of Homeland Security to ship immigrant detainees to “sanctuary cities,” including the district represented by Speaker of the House Nancy Pelosi.

At least one of last week's anti-democratic incursions clearly represented an impeachable offense: Trump ordered government officials to break the law, and then promised pardons if they were prosecuted. Yet none of that sparked "scandal" coverage in the press. As writer Oliver Willis noted, one CNN reporter treated the lawbreaking as just more Trump news. She stressed, "He seems more intent on creating chaos and scoring political points, especially as he looks ahead to the 2020 re-election campaign, and perhaps reanimate his base, which of course we know cares very deeply about the border.”

Breaking the law in order to animate your voting base isn't a thing! Or at least, it shouldn't be. But for Trump there are no rules. Just look at the unfolding Mueller report cover-up and how Trump's attorney general is busy obfuscating for the White House and trying to create legal distractions. While testifying before Congress last week, William Barr obediently pushed conservative conspiracy theories about Trump being targeted by the so-called “deep state” in 2016. “I think spying on a political campaign is a big deal,” Barr said, adding when pressed: “I think spying did occur, yes." The nation’s top cop seems intent on helping Trump punish his enemies.

“His testimony raises profound concern that the attorney general is doing what we urge emerging democracies not to do, and that is, seek to prosecute your political opponents after you win an election,” California Rep. Adam B. Schiff, chairman of the House Intelligence Committee, told the Washington Post's Greg Sargent. "The Trump precedent after only two years is that you can fire the FBI director who is running an investigation in which you may be implicated as president.”

The fact that journalists have to wait until this Thursday to finally see even a redacted version of perhaps the most important government report in decades ought to remain a source of embarrassment. Yet it also stands as testimony to Trump's ability to bully journalists and bend reality to his will.

Note that when the Trump administration refused to comply with a lawful congressional demand that Trump turn over his tax returns to the House Ways and Means Committee, after Trump became the first American president in nearly half a century not to make them public, the press mostly played the refusal as a ho-hum he said-he said partisan affair. That despite the fact that Trump occupies a mental never-never land on the topic. "No, there is no law," he absurdly claimed, when asked about the statute supporting the request for his tax returns. "There’s no law whatsoever."

The Post buried this quote in the final paragraph of its staid report on the showdown: "Mark W. Everson, who served as the IRS commissioner under President George W. Bush, said there is little dispute that Congress has the authority to receive Trump’s tax returns."

When the president of the United States refuses to acknowledge the law of the land, that represents creeping authoritarianism. And that that ought to be the day's only news.