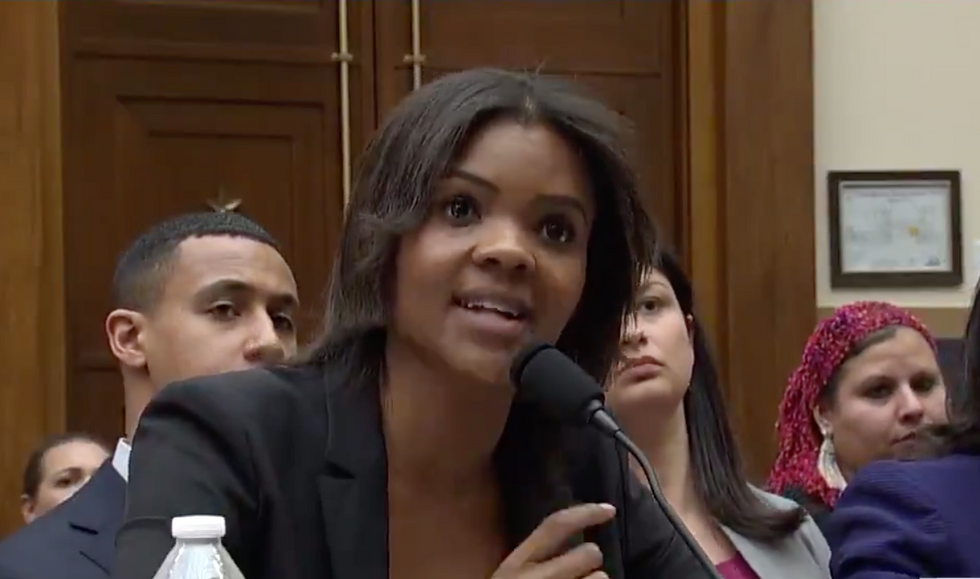 For over a year Republicans and right-wing activists have been promoting the false claim that conservatives are being "silenced" and marginalized on social media platforms. GOP lawmakers love the idea, despite it being entirely false, because it allows them to continue the victimization belief that is at the center of Trumpism: "If only liberals and brown people weren't part of America we could go back to the way things were" idea. Things were never the way they think they were.

On Tuesday the House Judiciary Committee held a hearing on Hate Crimes and the Rise of White Nationalism, which was also to "foster ideas about what social media companies can do to stem white nationalist propaganda and hate speech online,” according to the Committee.

Owens is infamous for her remarks that appeared to be supportive of Hitler, in which she said: “Whenever we say nationalism, the first thing people think about, at least in America, is Hitler.”

“But if Hitler just wanted to make Germany great and have things run well, OK, fine," Owens, speaking in London at a TPUSA recruitment event, said. "The problem is that he wanted, he had dreams outside of Germany. He wanted to globalise. He wanted everybody to be German, everybody to be speaking German. Everybody to look a different way. To me, that’s not nationalism."

In fact, Hitler didn't want to just have "things run well," he wanted to – and did – exterminate tens of millions of people, including Jews, LGBTQ people, people with disabilities, and many more.

Owens responded, only to embarrass herself further. Her remarks were so offensive the Chairman of the Committee, Jerry Nadler (D-NY) was forced to interject and instruct her that she was not allowed to disparage Members of Congress during a hearing in the manner in which she did.

Candace Owens: "I think it's pretty apparent that Mr. Lieu believes that black people are stupid and will not pursu… https://t.co/t8FDpAfrqZ
— CSPAN (@CSPAN) 1554832500.0

Owens accuses Rep.Lieu of being dishonest and playing a selected clip from the entire video. It should be noted that the question that was asked of her when she made her remarks appearing to defend Hitler had nothing to do with Hitler. She chose to bring up Hitler.

Her remarks when publicized were so offensive that Turning Point USA chapters wrote letters denouncing her.