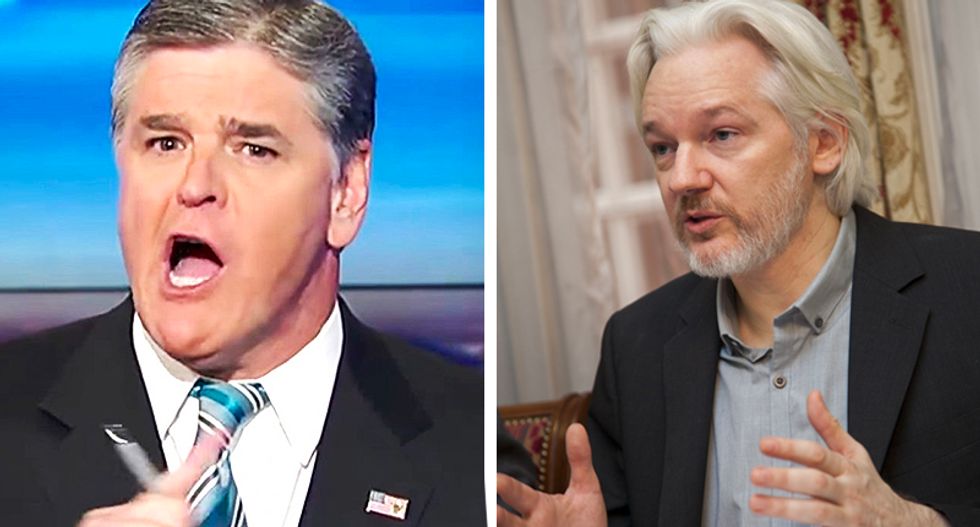 Fox News and WikiLeaks are staying mum after special counsel Robert Mueller’s report confirmed that murdered DNC staffer Seth Rich did not steal his own party’s emails, despite both outlets having pushed the fabricated story.

Mueller’s report offers the final word on a disgusting conspiracy perpetuated by Fox News and WikiLeaks. But, as Rolling Stone reports, neither Sean Hannity nor Julian Assange,  two high-profile voices in the Seth Rich conspiracy, nor their respective organizations have offered apologies for their misinformation.

Media Matters for America provides a great rundown of Hannity and Assange’s efforts to push the conspiracy that Rich, who had been shot a block away from his apartment in July 2016 in what police think was an attempted robbery, was actually murdered because he stole emails from the DNC and released them to WikiLeaks. WikiLeaks published 20,000 stolen emails roughly two weeks after Rich’s murder.

As Media Matters notes, in the aftermath of the WikiLeaks dump, “Assange brought up Rich unprompted on a Dutch TV program, implying that the deceased DNC staffer had been a source.” Assange’s implication was used by Hannity as a “fascinating” building block to push the conspiracy on his own audience. That effort culminated in a January 3, 2017 interview where, according to Media Matters, “Hannity suggested that WikiLeaks had received documents from a 'disgruntled Democrat' who he later noted may have been Rich."

Two days later, Fox 5 issued a retraction, writing in an editor’s note that Wheeler had since “backtracked” on his claim that FBI sources found a “link” between Rich and WikiLeaks. But, despite the Fox affiliate’s retraction, Hannity continued to lean into the conspiracy — even as Rich’s family released a statement chastising “people with transparent political agendas or sociopaths” who were continuing to push conspiracies about Rich’s murder.

In his report, the special counsel tasked with investigating Russia's influence on the 2016 presidential election found Rich had nothing to do with WikiLeaks' email dump, instead pinning the blame directly — meticulously — on Russian intelligence. The Mueller report even calls out WikiLeaks' effort to deflect blame for the stolen emails and pin it on Rich, a process the report calls “dissembling.” Rolling Stone reports:

Mueller notes that Assange and WikiLeaks made various statements about Rich after receiving the stolen documents, including offering a $20,000 reward for information leading to the conviction of his killer or killers and alluding to him in subsequent television interviews.”Beginning in the summer of 2016, Assange and WikiLeaks made a number of statements about Seth Rich, a former DNC staff member who was killed in July 2016,” Mueller wrote. “The statements about Rich implied falsely that he had been the source of the stolen DNC emails.”

Rolling Stone reporter Andy Kroll said the outlet sent detailed questions to lawyers for Fox News, Hannity, WikLeaks and Assange, but none of them replied to requests for comment. And, despite a Fox News executive originally promising an internal investigation of how the retracted story about Rich came to fruition, it remains unclear if that investigation ever occurred. In August 2017, a Fox News employee told CNN the original report remained “a huge question mark internally.”

Even without public acknowledgement from Hannity, Assange or their respective outlets, the family of Seth Rich expressed gratitude for Mueller’s conclusion on the WikiLeaks email hack.

“We appreciate that the facts included in the Mueller report confirm what we have said all along: Seth had nothing to do with taking DNC emails or WikiLeaks,” Seth’s parents Joel and Mary Rich told Rolling Stone. “Hopefully this will put to bed the harmful conspiracy theories about our sons.”

“I hope that the people who pushed, fueled, spread, ran headlines, articles, interviews, talk and opinion shows or in any way used my family’s tragedy to advance their political agendas — despite our pleas that what they were saying was not based on any facts — will take responsibility for the unimaginable pain they have caused us,” he told Rolling Stone.