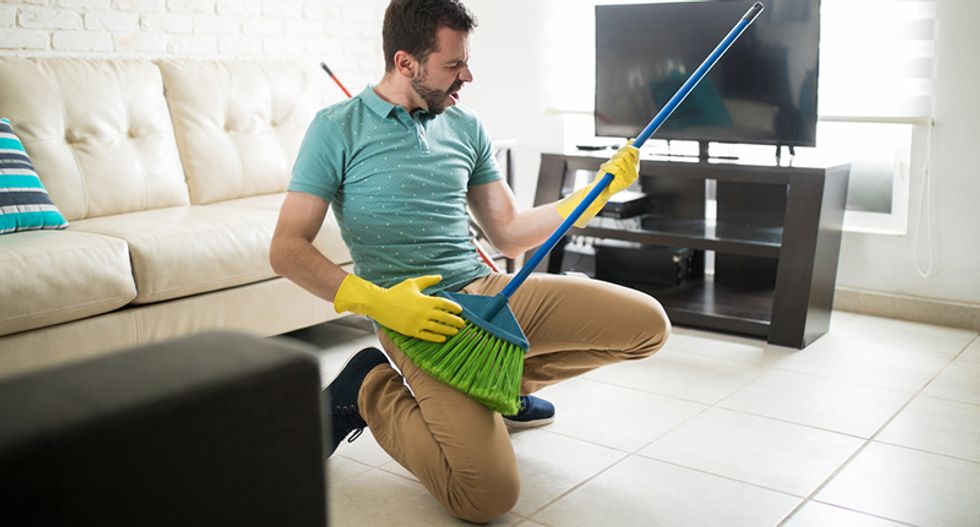 Royalty-free stock photo ID: 708627625 Playful man in the living room having fun while doing house chores and holding a broom as a guitar.
Byrd McDaniel
,
The Conversation
and
Byrd McDaniel
April 29, 2019

Competitors from around the country will don elaborate costumes, construct fantastical personas and perform comedic pantomimes of famous rock solos. Impaling themselves with their air guitars, swallowing them and smashing them to smithereens, they’ll elevate guitar playing to heights only imagined by real guitarists.

The winner will go on to represent the U.S. in the Air Guitar World Championships, which will take place in Oulu, Finland, in late August.

As an ethnomusicologist, I’ve studied air guitar competitions as a scholar, audience member and competitor. In fact, I was named the third best air guitarist in Boston in 2017 – truly one of my proudest moments.

Beyond the humorous, ironic façade of these performances is a sincere craft that has exploded in popularity over the past couple of decades.

The phonograph, which became a common household item in the the first decade of the 20th century, inspired some of the earliest known instances of solo air playing. The Minneapolis Phonograph Society described how some of its members, from the privacy of their homes, had “taken to ‘shadow conducting,’ that most exhilarating phonographic indoor sport.”

The privacy aspect was important: At the time, many feared the mass consumption of music could have a corrosive effect on people’s bodies and mental health. Air playing could be viewed as a sign of madness and pathology – a symptom of music overtaking the body.

Air playing also has deep roots in musical comedy. In vaudeville and variety shows, performers could get quick laughs by pantomiming to background music. Later, actors Fred Astaire and Jerry Lewis would continue this tradition of comedic air playing in films like “Cinderfella.”

These performances also paved the way for lip syncing. During World War II, live singing in drag and lip syncing were used to entertain soldiers stationed on military bases. Lip syncing eventually became an enduring feature of drag performance in LGBTQ subcultures, where performers would simulate singing to recorded music as a cheaper alternative to hiring live musicians.

Fans get in on the fun

Some of the first known instances of live musicians breaking out the air guitar occurred during the 1950s and 1960s. Notable examples included Bill Reed and the Diamonds air guitaring on the Steve Allen Show in 1957, and Joe Cocker famously shredding an air guitar during his performance at Woodstock in 1969.

But rock fans didn’t really start taking up air instruments of their own until the 1970s, when they found themselves unable to resist mimicking their favorite performers, who had become more and more inventive with their guitar playing.

Inspired by African American guitar virtuosos of the first half of the 20th century, artists like Jimi Hendrix, Jimmy Page, Eddie Van Halen, Rick Nielsen and Lita Ford adopted showy stage antics. Some shredded up and down the fretboard with breakneck speed. Others soloed with a powerful and sustained emotional pull. And others played guitars behind their backs or lit guitars on fire.

Air guitar playing was goofy. It was energetic. And it was fun.

But it was also a way to sincerely engage with music. It allowed many men move their bodies to music, while avoiding gendered stereotypes that dancing should be something feminine and unmanly.

The golden age of air guitar

By the early 1980s, air guitar had gone mainstream.

Beer companies, radio stations and colleges staged lip sync battles and air guitar competitions all over the United States. John McKenna and Michael Moffitt published “The Complete Air Guitar Handbook” in 1983, a how-to guide and psuedo-history of air guitar playing. There were famous air guitar scenes in the films “Bill and Ted’s Excellent Adventure” and “Risky Business,” while amateur music competition television shows, such as “Lip Service,” “Puttin’ on the Hits” and “Great Pretenders” featured contestants riffing on invisible guitars.

In 1996, the Oulu Music Video Festival in Finland arranged to have an air guitar competition. Since the competition featured mostly local performers with a few foreigners, the organizers jokingly called it the “Air Guitar World Championships.”

The debut was a hit, and organizers decided to make it a permanent feature of the annual festival. A group in the U.S. heard about this international competition and formed an American branch in 2003. Air guitar’s popularity in the U.S. was further bolstered by the release of the 2006 documentary “Air Guitar Nation” and the 2006 memoir “To Air Is Human,” which detailed journalist Dan Crane’s quest to become an air guitar champion.

Today, the U.S. Air Guitar Championships continues to organize competitions, allowing performers to advance from local to regional to the national competition.

Competition is in the air

This year marks the 17th annual contest, and air guitarist Georgia Lunch will be competing as the reigning champion.

In 2018, her routine included carrying a lunchbox onstage, sipping Jägermeister out of a hamburger flask and a spastic strumming style.

Her challengers include a group of well-known names from the air guitar circuit: Airistotle, Cindairella, Shred Nugent, Lieutenant Facemelter, Kingslayer and the Rockness Monster. She’ll also face some first-time competitors, who hope to unseat the air apparent.

United by this profound and peculiar practice, they’ll show that the history of the guitar solo is still being written.