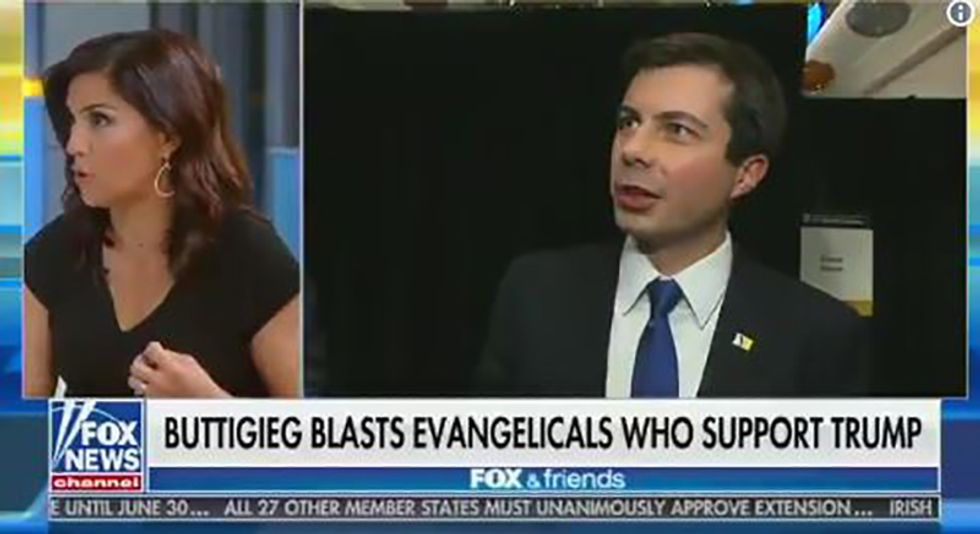 “I know his personal life is scandalous and colorful," Campos-Duffy said of President Donald Trump. "I’ll take it any day of the week over Mayor Pete, because I know he won’t deliver on any of the policies that I like."

"After eight years, I think, of an anti-Christian agenda on the Obama side, Christians and evangelicals and Catholics decided we wanted a fighter. We don't need a savior, we already have one," she told viewers, ignoring the very hypocrisy that displays, which Buttigieg had pointed out, and that both Buttigieg and former President Barack Obama are Christians.

"It’s something that really frustrates me because the hypocrisy is unbelievable," Buttigieg had said of evangelicals. "Here you have somebody [President Trump] who not only acts in a way that is not consistent with anything that I hear in scripture or in church, where it’s about lifting up the least among us and taking care of strangers, which is another word for immigrants, and making sure that you’re focusing your effort on the poor."

Campos-Duffy also attacked Buttigieg for blocking what she described as a "pregnancy crisis center," which are generally Christian facilities designed to prevent abortions at all costs. Some deceptively claim that they provide abortions to lure women.

"I would say he needs to look in the mirror, maybe take the policy log out f his own eye," she charged.