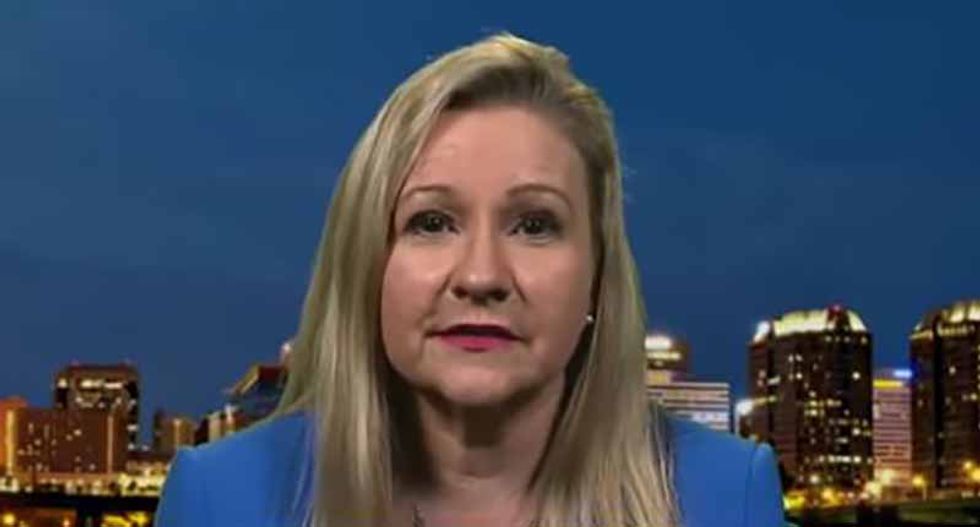 To put it indelicately, there’s something seriously off about this freshman GOP Senator. Healthy people aren’t terrified of their own citizens, and don’t pack heat on the Senate floor:

A recent incident shows how off-kilter Chase is.

The verbal altercation happened between her and a member of the Capitol police, Ashley Berryman. According to the incident report, Chase pulled up to the pedestrian plaza outside a building at the state capitol and demanded to be let into a restricted area. Chase already had an assigned parking spot elsewhere. The officer called to see if she could get access, but was told that Chase was not on the required list and did not have permission. The officer reiterated to Chase that she had no authority to let her park in the restricted area.

According to the report, rather than letting it go, Amanda Chase used the “don’t you know who I am?” screed and swore at the officer. Allegedly, she told the officer that she wasn’t going to move her car unless she “let the f***ing barricades down to let me in!” This caused a traffic jam with buses being stuck behind her.

When called out about her boorish behavior, Amanda Chase made a bad situation much, much worse.

She not only accused the officer of lying, but also said the Capitol police were infiltrated by “democrat operatives.”  (Blue Lives Matter, my ass...)

A partial snippet from her tirade on her Facebook page:

I am a bit surprised by this report, which honestly, looks like it was written by democrat operatives.

I would hate to think that there are those in the capital police who want to use their position for partisan reasons. But judging by what happens in politics everyday, it wouldn’t surprise me

Yeah, Democratic operatives planted a police officer in the parking lot to direct traffic in the hopes of embarrassing a racist legislator. What will those fiends think of next?

On her Facebook page, Chase went after the author of the Richmond Times Dispatch for daring to report on this story, calling it a “hit piece”. The author responded by posting a video of the incident.

This was apparently a bridge too far for even her GOP colleagues. I’ve written before about the VA Majority Leader, Tommy Norment.  To summarize, he’s pretty awful. Yet even he backs the Capitol police over Amanda Chase.

The most bizarre statement from the entire incident report was her use of the phrase “You don’t know equality of women’s rights!”

I found this unusual given Chase’s appearance on Fox News, where she brags about how she used her gun to scare off unarmed protesters after she voted against “the so-called Equal Rights Amendment”:

You will note from this interview a couple things:

First, Fox News is terrible. (Shock!) They tried to frame her as some sort of hero and helpfully called the unarmed citizens who confronted her “potentially violent protesters”.

Second, Amanda Chase is terrible. (Double shock!) You will note there was absolutely nothing about her description that indicated she was in any danger whatsoever, except that the protesters dared to approach her. She equated them being “pretty large female women” as the same thing as being dangerous.

As others have noted in the past, Chase seems to have a problem with large female women.  I should have mentioned that was also a part of this current incident:

Chase has taken zero responsibility for her horrid behavior.  In fact, during a recent interview she was encouraged to apologize, but Chase said the African-American officer should be the one apologizing to her for some damn reason.

Amanda Chase does not need to have legislative power. She just needs help. I seriously hope she gets it, but the first step is to remove her from office.

We need to win one Senate seat to flip it blue. A lot of good, progressive VA Senate choices on 90for90.org. Pick one and get to work!