Why we can’t let rural prosecutors fly under the radar 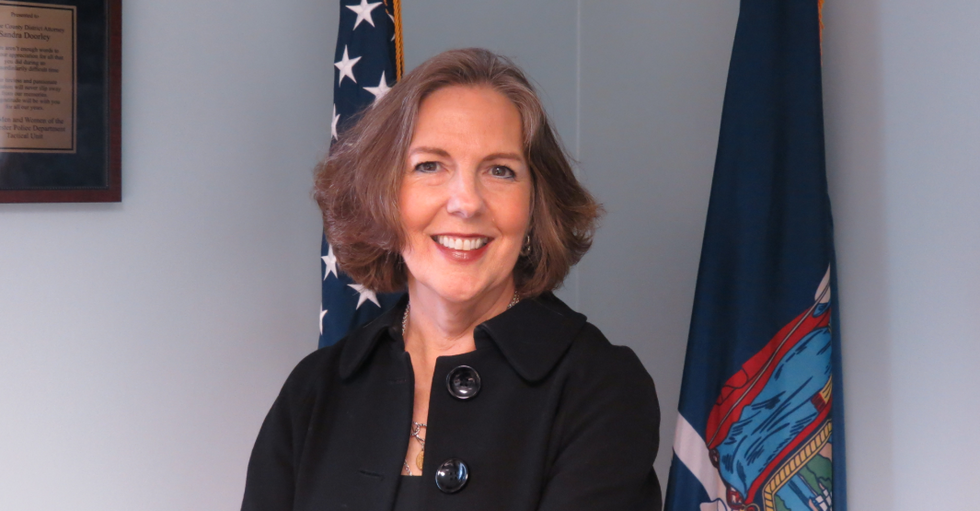 People who believe in criminal justice reform can find enemies all over the country. But they could be forgiven for looking at Monroe County (Rochester), New York and deeming it unsalvageable. Describing it matters because it represents a bigger strategic problem.

Monroe County’s people are dangled in front of the jailhouse by one Sandra Doorley, a district attorney who excitedly proclaims “Justice!!” on the internet after sentencing hearings—including when a child gets a life sentence. Doorley charges more people with felonies than some DAs in counties twice Monroe County’s size, such as Nassau County in Long Island.

Sandra Doorley, who took office as Monroe County’s DA in 2012 and prosecuted cases there for 20 years before that, comes across in some ways as American prosecution’s answer to Sarah Palin. Her legal mishaps and tone-deafness would make a good character study for the directors of a cop-themed mockumentary like Reno 911!—except that it would be much too

For example, a judge set aside a jury’s guilty verdict for Jalen Everett, a young Black man who was charged with perpetrating a mass shooting that killed three people at a Boys and Girls Club. That is because one of the jurors who passed through prosecutors’ peremptory strikes said, “I know what these people are like and they all want to kill people.” Nonetheless, Doorley claimed she spoke to all the jurors and was “confident by what they said that there was no racial issue or racial bias.” Everett was somehow prosecuted twice without a viable conviction from her office, and now he’s rapping about beating the case.

“The prosecutor’s misconduct during summation was pervasive and severe.”

In one of the many botched cases from Doorley’s office, a New York appeals court had to write the following: “Despite this Court’s repeated admonitions to prosecutors not to engage in misconduct during summation, the prosecutor improperly referred to facts not in evidence.” There is no record of discipline or retraining for the prosecutor on that case.

In another opinion, in which DA Sandra Doorley is personally named, a Monroe County judge states that he overrode typical criminal procedure law because “the prosecutor’s misconduct during summation—the various instances of which are exhaustively detailed in defendant’s brief—was pervasive and severe.”

Such poor conduct is exacerbated by Doorley’s going out of her way to embrace reactionary positions on a range of issues. Since marijuana is likely to become legal in New York soon, Doorley is preparing—by saying she won’t clear marijuana convictions for people who have a record.

In typically “woke” fashion, Doorley once told an audience that “heroin is the crack cocaine of the 21st century,” completely ignoring how the crack-versus-powder cocaine sentencing disparity impacted Black communities so harshly that even President Trump acted to correct it.

Right now, Doorley is freaking out because New York is considering ending “trial by ambush,” whereby defense lawyers don’t even know the substance of the evidence against the accused until the day of trial. (Not even Texas does trial by ambush.)

And a woman whose Twitter biography beams about her two daughters and her golden doodle has cited money and time as acceptable reasons to leave rape kits in Rochester untested.

Implications on the National Stage

Elected prosecutors as bad as Doorley control criminal justice systems for millions of people all across the country. But, like it or not, big money largely controls American politics. In district attorney races, the independent control on maniacal prosecutors is not the State Bar, as it should be. Instead, it’s largely funders such as George Soros—leading right-wing conspiracy theorists to wonder aloud if basic good government principles are a globalist plot.

The effectiveness of Soros’s support for criminal justice reform has previously been showcased. When he and his organizations poured millions of dollars of independent expenditure money into DA races in 2015 and 2016, supporting reform candidates, virtually all of the targeted incumbents were defeated. Hard-nosed prosecutors may talk a big game on locking people up, but they are often incapable of generating the capital needed to win truly competitive elections.

However, after underestimating the sophisticated power-brokering of the law enforcement class in California, Soros and others ran into a brick wall in 2018. Almost every progressive California prosecutor candidate went up in electoral flames, with spreads ranging from 20 to 35 percent. Since then, many criminal justice and drug policy reformers have wondered what next for the Soros camp.

Mass incarceration is peaking in smaller towns and cities.

Numerous pro-reform DA candidates who didn’t enjoy major financial backing performed creditably in the 2018 elections but fell short, leaving supporters to wonder how much more could have been achieved with more funds.

In Hennepin County (Minneapolis), pro-marijuana legalization candidate Mark Haase raised $133,306.23 to the $155,745.50 raised by incumbent chief prosecutor Michael O. Freeman, according to local campaign finance records. Freeman is reviled by reformers for his refusal to charge police officers who kill Black civilians. Soros stayed out of this race, too, which was decided by a mere 10-point spread. Many of the Soros-funded candidates have gotten hundreds of thousands of dollars, if not more, in independent expenditure money.

The counties where promising, pro-reform DA candidates suffer from a lack of funding often have traits in common. Many have sizeable populations—the three I just mentioned each have over one million residents. But they are either far from the East or West coast—like Clark and Hennepin—or lack a big city, like Middlesex County. The incumbents are often Democrats, albeit conservative on criminal justice policy. They also have relatively low Black populations—in single percent digits or the low teens—though the Black population in each county is harshly persecuted by these criminal justice systems.

It may be that, relative to coastal counties with bigger cities and more prominent problems, these places simply don’t catch pro-reform funders’ eyes.

“If all the money, time, and resources spent last year only amounted to a 3,000-person reduction in the jail population, are we doing this right?”

And this is a big shame. Because mass incarceration is peaking in smaller towns and cities outside of America’s biggest. Upon the release of Prison Policy Initiative’s 2019 report on mass incarceration by the numbers, it is uncomfortably notable that small gains in the big cities where reform prosecutors have been elected have done little to substantively move the national needle.

As Thomas B. Harvey, the co-founder of Arch City Defense in St. Louis, Missouri, said recently, “If the sum total of all the money, time, and resources spent last year only amounted to a 3,000-person reduction in the jail population, are we doing this right?”

The answer is that we clearly are not.

The Big Philanthropy pulse of the criminal justice reform movement could go in one of a couple ways. It can give up on district attorney elections and return to state legislatures—many members of which have time and again shown they have no interest in evidence-based policy in this area.

Or, it can embrace the criticism and “buy” DA seats in sparsely funded rural races where the money would likely have a transformative impact. In a best-case scenario, this could truly tear up the fabric of the carceral American justice system.

Such campaigns would demonstrate to the nation and the world that 3,000 people released from human cages—out of a total incarcerated population of 2.3 million—isn’t anywhere near enough.

This article was originally published by Filter, a magazine covering drug use, drug policy and human rights. Follow Filter on Facebook or Twitter.
From Your Site Articles
Report typos and corrections to: feedback@alternet.org.
#story_page_post_article