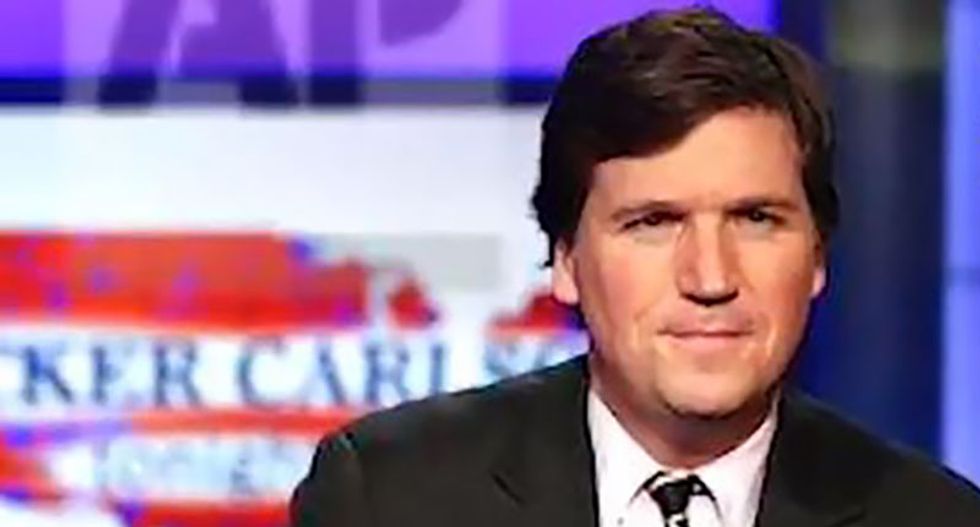 Fox News' top anchor Tucker Carlson is refusing to apologize for offensive remarks that appear to support sex with underaged children, and disturbingly misogynistic comments about women, including Hillary Clinton, Arianna Huffington, Paris Hilton, Britney Spears, and Alexis Stewart, the daughter of Martha Stewart. Media Matters Sunday night published a series of unearthed comments he made on a radio show for several years, including during the time he was working for Fox News.

“Media Matters caught me saying something naughty on a radio show more than a decade ago," Carlson said in a statement about remarks made through 2011. "Rather than express the usual ritual contrition, how about this: I’m on television every weeknight live for an hour. If you want to know what I think, you can watch. Anyone who disagrees with my views is welcome to come on and explain why.”

Carlson mischaracterizes the trove of offensive comments published by Media Matters. There was more than just one remark, and they were not "naughty;" they were supportive of pedophilia and extremely misogynistic. They also were made over a five year period.

Among Carlson's remarks on the talk radio show "Bubba the Love Sponge,"  unearthed by Media Matters:

"Carlson said underage marriage is not the same thing exactly as pulling a child from a bus stop and sexually assaulting that child. ... The rapist in this case has made a lifelong commitment to live and take care of the person so it is a little different.'"

"After Bubba the Love Sponge described underage girls at Carlson's daughter’s boarding school experimenting sexually with each other, Carlson said, 'If it weren't my daughter I would love that scenario.'"

"Carlson said criminal charges against Warren Jeffs are 'bullshit' because 'arranging a marriage between a 16-year-old and a 27-year-old is not the same as pulling a stranger off the street and raping her.'"

Jeffs, it should be noted, was on the FBI's Ten Most Wanted list. He was convicted of felony child sexual assault and arranging marriages for adult males and underaged girls. He's serving a life sentence plus 20 years in prison.

"Carlson described TV host Alexis Stewart, Martha Stewart’s daughter, as 'c*nty' and said he wanted to 'give her the spanking she so desperately needs.'"

"Carlson: If Hillary Clinton were president, 'how long do you think it would take before she castrated you?'"

Carlson also said if Hillary Clinton "could castrate you, she would," and “thereby she gets not a single vote from any white male." He also called her "anti-penis."

"Carlson: If I made the laws, 'Michael Vick would have been executed and Warren Jeffs would be out on the street.'"

"Carlson: A teacher who molested a 13-year-old took pressure off the victim’s female classmates because they wouldn’t have to sleep with him."

Carlson is also the co-founder of the right wing website The Daily Caller.