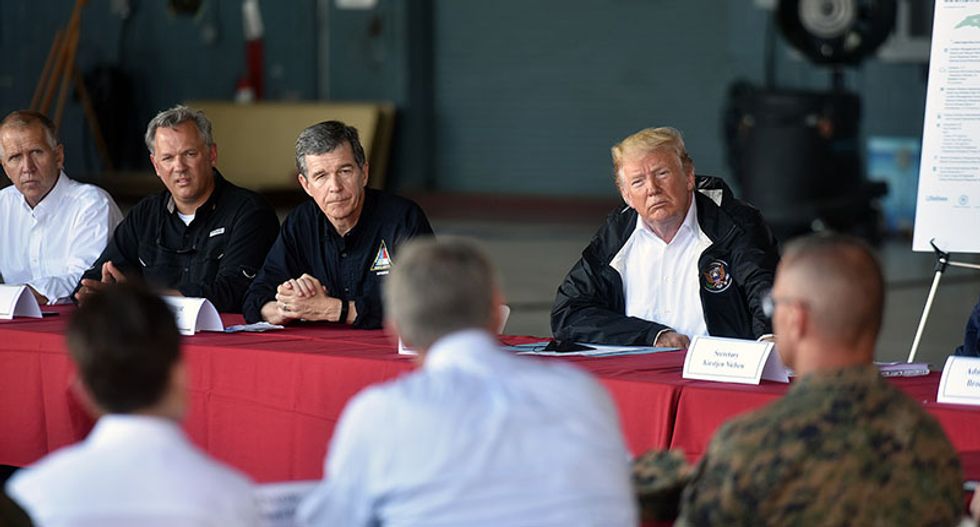 North Carolina Sen. Thom Tillis has been an ardent supporter of Donald Trump, but he may be about to find out the hard way that in today’s Republican Party, any dissension whatsoever is enough to inspire a primary challenger.

Tillis, who is running for re-election in a state that Trump carried only 50-46, announced a few days ago that he’d vote on a resolution of disapproval over the White House’s emergency declaration. That made him some enemies at home, and several Tar Heel State Republican activists tell the News & Observer’s Brian Murphy that they’d welcome a primary campaign against him.

However, it’s easy to call for a primary challenger, but it’s quite another thing altogether to actually find someone willing and able to run a strong campaign against an incumbent. So far, no notable Republicans have said they’re even interested in mounting a crusade against Tillis. The only potential candidate mentioned in the article is Rep. Mark Walker, and he doesn’t seem to be chomping at the bit to run. Still, the congressman, who back in 2014 endorsed starting a “little war with Mexico,” didn’t rule out campaigning against Tillis when given the chance.

Walker, who said he considered Tillis a good friend, told Murphy, “Voting with the Democrats on something this important, I don’t see where that helps him.” When Murphy asked Walker if he might run, the congressman said he was “not suggesting that at all at this point,” which is hardly a no. Walker added that he believed that Tillis had “opened the door” to a challenger, but that ”I’m not going to sit here and tell you that that’s me.” With good friends like that, who needs good enemies?

Walker, who worked as a Baptist pastor before he was elected to office, does have some experience taking on the GOP establishment and winning. Walker ran for an open seat in the Greensboro area in 2014 and reached the GOP primary runoff with Rockingham County District Attorney Phil Berger, Jr. Berger was the son and namesake of Phil Berger, who was and remains the leader of the state Senate, and he held a big financial edge over Walker going into the contest.

The elder Berger even used his national influence to get the Republican State Leadership Committee—the entity tasked with helping GOP legislative candidates—to funnel $75,000 to a super PAC to help him out on his son’s campaign. However, it was Walker who pulled off a solid 60-40 win, and he hasn’t faced a serious primary or general election challenge since then. Walker, like so many former anti-establishment candidates, has become a member of the party leadership since then, with him being elected Republican Conference vice chair in November.