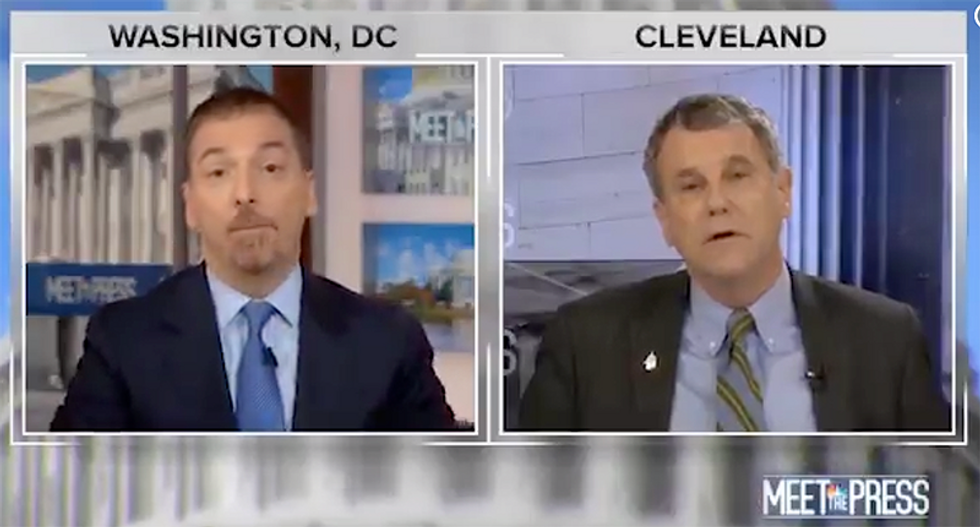 Chuck Todd did what he does by attempting to put Democrats on the spot with poorly spun and interpreted narratives. Senator Sherrod Brown would have none of it. Instead, he went toe to toe with Todd, unlike other Democrats who generally acquiesce to the neoliberal lunacy.

Chuck Todd asked the question many Right Wingers, Republicans, Centrists, and Moderates continue to push in an attempt to squelch the faction of the Democratic party that reflects the will of the people. Everyone should remember that when we poll Americans on the policies they want, it always turns out that they are in line with the Progressive wing of the Democratic Party. It is clear those in the media, continue to be wards of the plutocracy as they try to move the country in the other direction, attempting to use peer pressure on a false narrative as a catalyst.

"Do you think there is a danger of going too far Left that it may scare some voters," Chuck Todd asked. "Say, in Ohio."

Senator Brown did not blink an eye or stutter with his response.

"I hear these stories," Senator Brown said. "That's the story of the day about Democrats moving to the Left. The more important story is how Republicans continue to move to the Right, how President Trump betrays workers, and utters racist antisemitic rhetoric, and no one in their party calls them out. They don't have divisions. They've all followed his racist actions and betrayal of workers. They've followed it like lemmings off a cliff. That's the story. Not some degrees of differences between and among Democrats."

While many were upset about Sherrod Brown's statement on Medicare for All, he clearly redeemed himself here. The reality is, Brown has been a reliable Progressive. I fail to understand why he adamantly came out against Single-Payer Medicare for All. My hunch is the push back from that was instrumental in him not seeking the presidency.