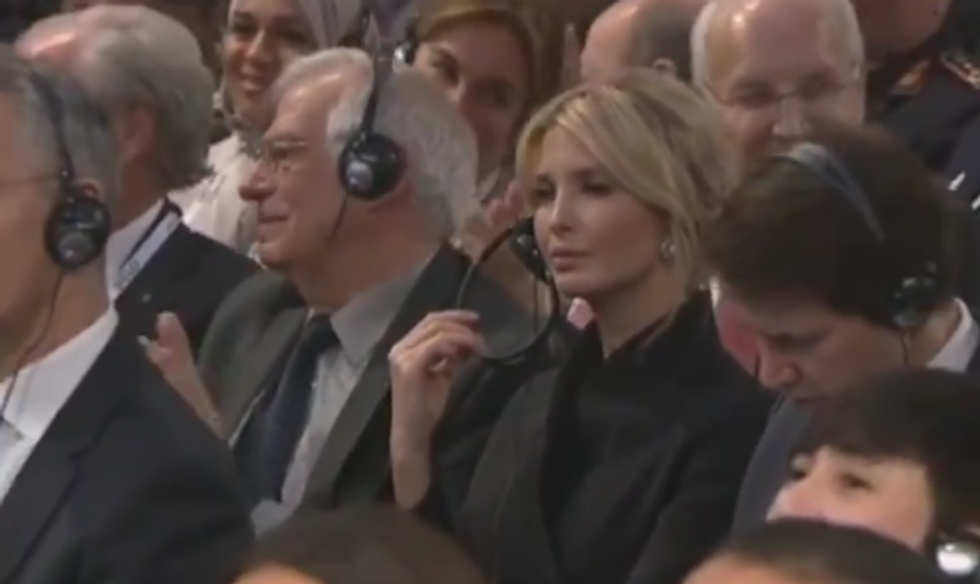 The Munich Security Conference on Saturday drew a lot of attention as Vice President Mike Pence's fiery call for Europe to stand with President Donald Trump was awkwardly met with zero applause whatsoever.

But another awkward moment for the president came when German Chancellor Angela Merkel delivered a scorching condemnation of the U.S. trade war — and Trump's daughter Ivanka, sitting in the crowd, could only look on in stone-cold silence as the leader of one of America's major allies ripped her father's economic policy to pieces.

"Apparently, the American secretary of trade says German cars are a threat to America's national security," said Merkel. "We're proud of our automotive industry, and, I think we can be, we're proud of our cars. They are built in the United States of America. South Carolina is one of the largest — it's actually the largest BMW plant. Not in Bavaria. South Carolina is supplying China."

"So when these cars that, because they're built in South Carolina, are not becoming less threatening, rather than the ones that are built in Bavaria, are supposed to be a threat to the national security of America, it's a bit of a shock to us," said Merkel, to thunderous applause — and silence from the First Daughter.

Ivanka Trump is the only person in audience who doesn’t applaud after Angela Merkel points out the absurdity of Tru… https://t.co/8Cspkai0eT
— Aaron Rupar (@Aaron Rupar) 1550343351.0

Merkel is correct. The BMW plant in Spartanburg, South Carolina employs 10,000 American workers, and in 2017 exported $8.75 billion worth of cars through the Port of Charleston. For all of Trump's demands to tax BMWs and Mercedes, these car chains create a lot of American jobs and exports.

And neither Ivanka nor her father has any easy answer to that fact.