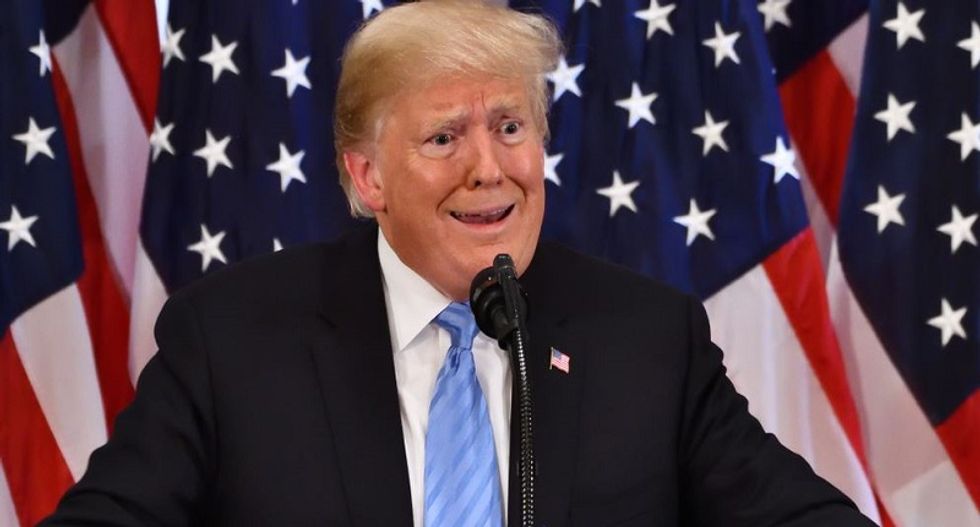 At this point, I’d almost prefer that Donald Trump act on at least one of his tweet-threats instead of constantly hurling his rage-gasms into the void, keeping us all perpetually in a state of awkward panic. Observing Trump’s ongoing series of thirst-traps for dictators feels like leaning too far back in your chair and almost falling over but catching yourself at the last second -- that sense of adrenalized gravitational panic seems to linger more and more between presidential outbursts as time wears on.

Along those lines, there’s a quiet debate in progress about whether we should continue to pay attention to Trump’s increasingly unhinged blurts and tweets. We’re each the boss of our own social media feed, so, sure, we retain the privilege to decide what we choose to care about. That being said, no matter how deeply the brain-worms burrow into Trump’s dwindling cerebrum, and no matter how worn down we might be, he’s still the president and his words matter. Yes, it’s a trap because he needs us to pay attention. Yet it remains true that good citizenship includes vigilance. Likewise, some of us who cover politics for a living have a responsibility to author the first draft of history. I want nothing more than for history to remember all of it, every episode of treachery and every damaging shriek. So I continue to pay attention.

If you’ve decided to ignore Trump’s public statements, then you probably missed a series of tweets last weekend in which the president threatened “retribution” against "Saturday Night Live" for being mean to him, followed by another tweet in which he hinted at jailing his investigators at the Department of Justice. Then he capped off the series with two tweets describing former acting FBI director Andrew McCabe’s discussions about invoking the 25th Amendment as a “coup” and “treason.”

Sure, it’s entirely possible Trump’s merely pandering to his base. His only political asset right now is the cult-like loyalty of his Red Hat army, so he’s always force-feeding it plenty of mall steaks to keep the ranks energized. Furthermore, Trump has to know that the only thing keeping him out of federal prison right now is the office of the presidency. His declaration of a national emergency last Friday reinforces both of those goals: It gives the bigots another intravenous fix of anti-Latino racism just in time for the 2020 campaign, and it expands his executive authority as investigators circle the White House. Expanding his power, by the way, is an especially weird goal for the "limited government" conservatives who still support Trump to pursue, but that’s the least of the problems here.

Trump's threats about incarcerating his political enemies are given new weight by the national emergency declaration, knowing the expanded powers the declaration can legally provide. The Constitution, for example, allows the president to suspend habeas corpus in the event of an invasion. What has Trump repeatedly called the alleged emergency at the border? Yeah, an invasion.

The question of the year is whether he’ll actually take that next step.

As we’ve seen with other executive actions, Trump’s strategy has been to loosen the ground through endlessly repetitive tweets and rally tantrums. Now, for the first time, Trump is repeatedly tweeting the “deep state coup” meme. For some time now, Fox News and other pro-Trump outlets have been floating this counterpoint to the various investigations into Trump’s crimes, seeking to convince voters and news media people that "coup" is an adequate explanation for why every entity linked to Trump -- the Trump Organization, the White House, the Trump Foundation, the Trump campaign, the Trump family -- is under intense scrutiny. It can’t possibly be that Trump’s been a professional con man for 40 years and his chickens have finally come home to roost. Instead, it has to be that the federal government, including Trump’s hand-picked “best people,” are seeing evidence that Trump broke the law on innumerable fronts.

Nevertheless, as I’ve been warning about since 2017, the “deep state coup” narrative is taking shape. It behooves Trump, both politically and legally, to feverishly climb aboard.

Once enough of us are accustomed to the idea, and once he’s bludgeoned the news media with enough fake charges against his enemies to justify arrests, whether by the military or otherwise, his next move is -- well, possible, but almost unthinkable.

To repeat: I’m so exhausted with the constant threats and the Reichstag fires, I feel like Trump either needs to act upon his tweets or shut the hell up. Even if he does nothing, his threats make it easier for future leaders to pick up where he left off. It’s only a matter of time before we grow desensitized to this degree of overreach by the president. It won’t require much to take the next step. We’ve seen it elsewhere, whether in Turkey or the Philippines or, naturally, from Trump’s commanding officer, Vladimir Putin. Is it so unheard of here, with our president issuing four statements in two days accusing his enemies of retribution and coup attempts, and threatening them with  jail? We used to think such threats themselves weren’t possible. Now, they’re just another part of our day.

To make matters worse, the president’s surrogates are busily trying to undermine sound and constitutional remedies for despotism, namely the 25th Amendment and Article II, Section 4 -- the impeachment language. You’ve probably overheard more than a few Red Hat pundits hilariously suggesting that the 25th is unconstitutional even though it’s literally in the Constitution. And no, it’s not against the law for FBI officials to wonder out loud whether Cabinet officials would vote to invoke presidential removal under that amendment. But Trumpers want as many voters as possible to believe it’s an outrageous act, thus eliminating it as a viable political solution. The same goes for impeachment, which was written into the Constitution for a reason and not as a colonial joke.

All told, ever since Robert Mueller was appointed we’ve all wondered out loud whether Trump would get crazier and more dictatorial as investigators closed in. I think we have a clear answer to this question. The only remaining question is whether he’ll actually take the next step following the threats. I choose to rule nothing out. The best approach now is to keep our eyes open and to be proactive. Rather than waiting for Andrew McCabe to be mysteriously disappeared or for Mueller to be arrested and tried in a kangaroo court, activists need to get ahead of this while they still can.