Rep. Elijah Cummings delivers stunning closing statement — and moves Michael Cohen to tears: 'We are so much better than this' 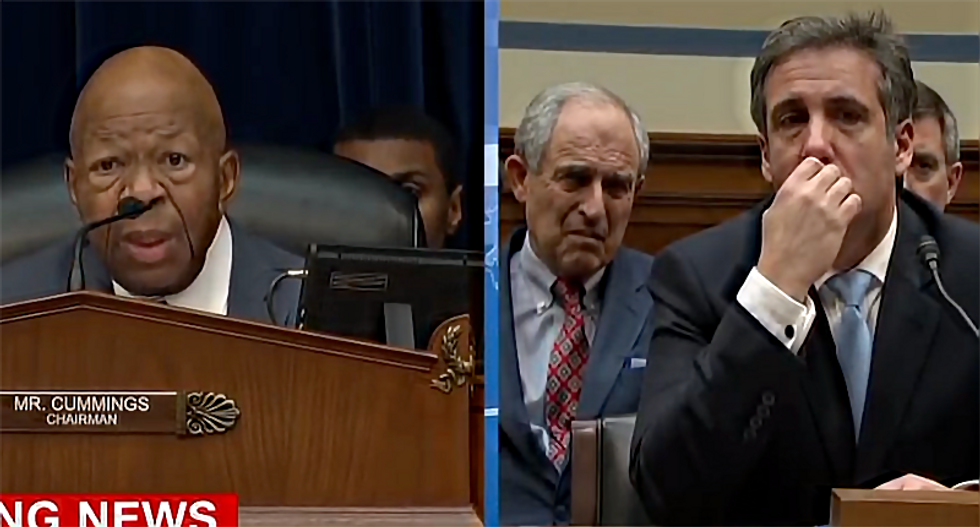 “It’s very painful. It’s very painful,” Cummings began, “You made a lot of mistakes, Mr. Cohen, and you've admitted that. And you know what is the saddest part of this whole thing is? That some very innocent people are hurting too and you acknowledge that and that's your family.”

“And you know if we as a nation did not give people an opportunity after they made mistakes to change their lives, a whole lot of people would not do very well,” the chairman added.

Cummings later shed some insight on what he perceived to be Cohen’s motivation in testifying before the House.

“I don’t know why this is happening for you, but it is my hope that a small part of it is for our country to be better,” he said. “If I hear you correctly, it sounds like you’re crying out for a new normal—for us getting back to normal. It sounds to me like you want to make sure that our democracy stays in tact.”

“According to the Washington Post, our president has made at least 8,718 false or misleading statements,” he added. “That’s not what we teach our children, I don’t teach mine that. For whatever reason, you got caught up in it.”

As Cummings spoke about Cohen’s children, the former Trump lawyer teared up.

“This has got to be one of the hardest things that you could do,” Cummings said. “Let me tell you the picture that really pained me. You were lea ing the courthouse, and I guess it’s your daughter had braces or something on? Man that thing hurt me. As a father with two daughters, it hurt me.”

“I mean that from the depths of my heart,” he said. “When we’re dancing with the angels, the question will be asked: ‘In 2019, what did we do to make sure we kept our democracy in tact? Did we stand on the sidelines and say nothing?”

Cummings then took a shot at House Republicans, who claimed throughout Cohen’s testimony that this was the first hearing held by the committee. In fact, Cummings explained, the first was about prescription drug prices.

"We can do more than one thing," he said. "And we have got to get back to normal."