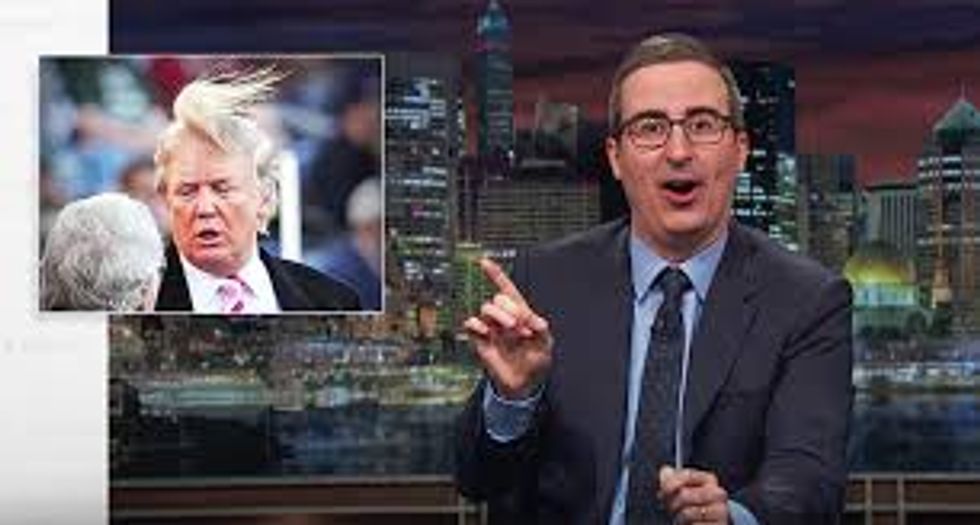 Last Week Tonight host John Oliver had harsh words for Donald Trump in a new Newsweek interview — and discussed why he wouldn't even want to speak to the American president.

"I’ve got no interest in talking to him," Oliver said when asked what he'd say to Trump if he had 20 minutes alone with him. "Interviewing him is pointless."

The Daily Show alumnus also described why writing about Trump is so much more difficult than writing about President Barack Obama.

"Normally, the job of comedy is to take something substantial and kind of break it down into comedy," Oliver told Newsweek. "Whereas, when you have the president say something that he doesn’t mean, or things that are objectively false all the time, you end up having to go through a different system where you’re trying to inject meaning into something that he said that’s objectively meaningless. And then [you] justify why you’ve just done that. And then you write a joke."

"It’s so much vacuous nonsense that you feel like he’s just chumming the water with bullsh*t," the host added. "One of the first things you need to do is convince someone why something that he’s just said—which does not seem like it’s worth listening to—is worth listening to."

Oliver said the topics he and his staff contend with now make writing jokes particularly difficult.

"There are times, more often than not, where it feels like an episode of Chopped where you just empty a sack of like broken glass, used needles, condoms and an elemental sense of sadness and you’re like, ‘I would like something that tastes delicious,’” he said. “But [the writers] do it! That’s the thing. It takes a broad, intense set of skills.”

Read the entire interview via Newsweek.