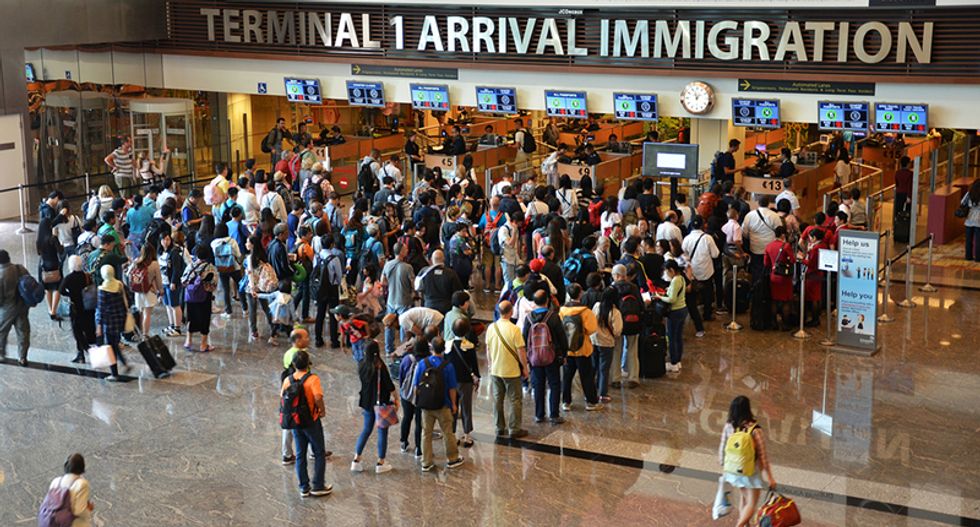 Eleanor Paynter
and
The Conversation
February 05, 2019

President Trump has long called migration a security crisis, but in recent weeks he has also referred to the situation along the southern border as a humanitarian crisis.

As he ended the government shutdown in a televised speech on Jan. 25, Trump reiterated his claim that a border wall between the United States and Mexico would save the lives of Central American migrants, many of whom are women and children.

“Walls work,” he said. “They save good people from attempting a very dangerous journey from other countries.”

An estimated 1.3 million migrants entered the European Union in 2015 — more than double the year before. They were seeking asylum protection from war, conflict and extreme poverty.

To put that figure in context, just half-a-million migrants — including asylum-seekers, who typically give themselves up to border agents — were apprehended at the U.S.-Mexico border in 2018.

The number of first-time asylum applicants to the European Union tripled between 2013 and 2015, from 405,000 total applications to 1.3 million. Over half of all asylum-seekers were from Syria, Afghanistan or Iraq.

Most of Europe’s migrants came from Syria, Afghanistan or Iraq. Generally, these asylum-seekers entered the European Union via Turkey, crossing Macedonia, Serbia and other Balkan countries by foot.

Well over 100,000 migrants from sub-Saharan African countries reached southern Europe by sea in 2015, crossing the Mediterranean from North Africa.

Germany threw its doors open. Almost 900,000 migrants arrived there in 2015 after the country suspended an EU rule requiring that migrants apply for asylum in the first EU country they set foot in.

Migrants arriving at southern nations like Greece and Italy generally hoped to continue north to Germany.

Greece, however, was unable to process the more than 850,000 migrants who arrived to its shores in 2015. It built holding camps on its Aegean islands, where people stayed in overcrowded, often inhospitable conditions for up to two years as their asylum claims were processed.

Other EU governments were openly hostile to refugees. Across Eastern Europe, countries along the Balkan route began to build and extend border barriers.

Europe had five border walls in 2014, built following the 1985 Schengen agreement amid concerns about immigration at the bloc’s external borders. By 2017, it had 15 barriers, according to the not-for-profit Transnational Institute, and a heavily patrolled maritime border.

Border walls have not stopped migration into Europe.

Tens of thousands of migrants still cross the Balkans to reach the EU each year – they just do so in more dangerous conditions.

Before the walls, migrants traveled in groups, with or without the help of smugglers.

Now, paying a smuggler is the only way for migrants to avoid border guards and pass barriers. For several thousand dollars, smugglers bribe EU border agents, hide migrants in trucks or walk them across EU borders under cover of darkness.

At least 10,000 migrants now live in homeless encampments or squats across Italy. And after the French refugee camp known as “The Calais Jungle” was demolished in 2016, nearly as many people scattered to makeshift camps or the streets of French cities.

Stopping migrants before they arrive

Italy, where most refugees arrive by boat from North Africa, has tried to keep migrants out in a different way: It outsources its border security.

In 2017, Italy struck a deal to supply the Libyan coast guard with vessels and anti-smuggling training. The agreement promised US$325 million if Libyan agents would intercept migrants crossing the Mediterranean and return them to Libyan detention centers.

In my own interviews with African migrants in Italy who’d crossed the Sahara to Libya, many told me that they eventually boarded a boat there not as a final step toward Europe, but to escape imprisonment or torture in Libya.

Libyan coast guard boats have left many migrants stranded at sea. In September 2018, when a boat carrying 100 migrants capsized, Italy and Libya blamed one other for the failed rescue.

Last June, 629 migrants, including 123 unaccompanied minors and seven pregnant women, were held at sea for over a week, unable to seek asylum or aid.

Malta, Spain and France have since repeatedly closed their ports to rescue vessels, refusing to bear responsibility for the migrants on board.

Lessons for the US

Migrant routes into the EU also continue to shift in response to closing borders. Spain, for example, has seen sea arrivals increase tenfold since 2015.

In my assessment, Trump’s crackdown along the U.S.-Mexico border will have similar results. There are signs of this already.

A decades-old U.S. policy of paying Mexico to secure its southern border with Guatemala to keep Central American migrants out has merely made the journey riskier, according to a 2018 United Nations report.

To avoid apprehension by Mexican border patrol, some migrants get from Guatemala to Mexico by water, on boats that are often operated by traffickers.

As in Europe, migrants now increasingly rely on smugglers to get across the U.S.-Mexico border, who may charge more than $10,000 per family.

That does not guarantee safe passage. Between August and October last year, smugglers abandoned more than 1,400 migrants, including children, in the sweltering Arizona desert. Hoping to find safety in large groups, more migrants are now traveling in caravans.

As the U.S. and the EU struggle to resolve their border crises, migrants will continue to fleetheir home countries seeking protection. Heightened border control certainly won’t make them safer.