Was Martin Luther King a socialist? 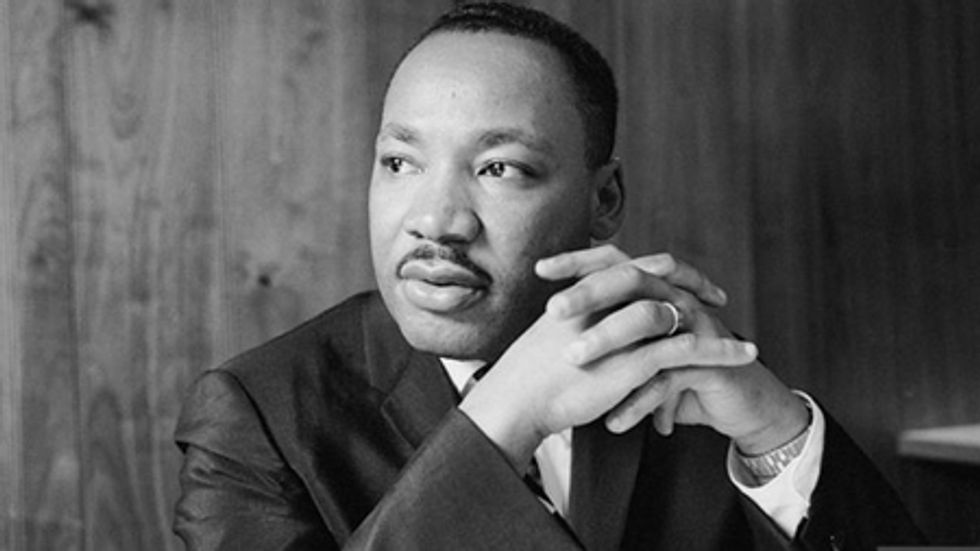 “The Millennial socialists are coming,” declared a June 30 New York Times headline, describing a surprise surge of young female candidates endorsed by the Democratic Socialists of America who beat their establishment opponents in primary races in New York and Pennsylvania. No longer is being a socialist considered scary — at least if you came of age after the Fall of the Wall. For many, it’s a breath of fresh air.

Martin Luther King, Jr., if he were around today, would likely be smiling.

The image of the handsome, be-suited King, looking like a middle-class messenger of the American Dream as he mesmerized the masses on the steps of the Lincoln memorial with his famous “I Have a Dream” speech, has been embraced by everyone from Coca-Cola executives to Donald Trump. It’s part of America’s cultural memory, our political DNA.

Some may know that there was more to his legacy than the epic fight to end racism, recalling that in the period leading up to his assassination in 1968, King focused on building a multi-racial movement for economic justice with his labor activism and Poor People’s Campaign.

But even that view, argues Michael Honey in his new book, To the Promised Land: Martin Luther King and the Fight for Economic Justice, does not capture the whole story.

Consider King’s words in a letter to Coretta Scott in 1952: “I am much more socialistic in my economic theory than capitalistic,” he wrote, adding that capitalism had “out-lived its usefulness” because it had “brought about a system that takes necessities from the masses to give luxuries to the classes.”

King was 23 years old when he wrote that.

The same year, his future spouse sent him a copy of Edward Bellamy’s utopian socialist novel of 1888, Looking Backward. King wrote to her with revolutionary fervor: “Let us continue to hope, work, and pray that in the future we will live to see a warless world, a better distribution of wealth, and a brotherhood that transcends race or color…This is the gospel that I will preach to the world.”

King’s suspicion of American capitalism and his passion for economic justice did not represent a turn in his last tumultuous years, argues Honey, Haley Professor of Humanities at the University of Washington Tacoma. They were there all along.

Beyond the suit-and-tie King appealing for racial equality was a man in blue jeans marching alongside laborers, sitting in jail cells, and rousing workers on picket lines. This was a man keenly aware, observes Honey, that he was descended from “African American and Irish dirt-poor people who lived the American nightmare.” He had seen the horror of Depression-era breadlines that contributed to what King described as his “anti-capitalistic feelings.” Honey notes that as a teenager in the 1940s, King worked at a southern factory but quit after the foreman called him a “nigger.” When he worked on a tobacco farm up North, he saw first-hand that abusers of the poor were racially indiscriminate in their exploitation.

As a college student, King wrote a paper declaring that racial injustice and economic injustice were inseparable twins.

So if King was an economic radical from the beginning, why don’t we know more about it?

Honey, who was an organizer in Memphis in the years following King’s death, describes how his own view shifted in 1994 when he found a file of King’s labor speeches in the Martin Luther King, Jr., Center for Nonviolent Social Change library in Atlanta. These speeches gave him insight into how King and his colleagues built alliances with workers and organized labor and made him want to learn more about that history, which his new book brings to life.

He says that the reason MLK’s legacy has been misunderstood has to do with political and cultural forces in King’s time and in our own.

Honey points out that civil rights leaders who rose to prominence before King, like W.E.B. Du Bois and Ella Baker, explicitly linked racism to economic injustice, but that line of thinking became taboo during the Red Scare. King, explains Honey, was a pragmatist who saw that it would not be possible to make progress on poverty until black people were able to vote and wield political power. So he devoted his efforts to securing civil rights as the first step in a movement to turn America into a place where poor people of all colors would one day be empowered.

On February 18, 1957, Time magazine put a picture of King on its cover, describing him as “expert organizer” but “no radical.” Honey says that Time was actually wrong on both counts: his strength lay more in visionary and oratory power than organizing prowess, and he was certainly radical in his thinking. Nevertheless, a journalistic version of King emerged that painted him as a civil rights leader who became increasingly radical after the Vietnam War, a long-accepted picture that scholars have begun to challenge in recent years. (See: Vincent Harding’s Martin Luther King: The Inconvenient Hero and Misremembering Dr. King, by Jennifer J. Yanco).

Honey notes that Coretta Scott King kept her husband’s letters and early sermons, in which he expressed support for ideas like the “nationalization of industry,” in a box in her basement for over thirty years after he died, a move that may have been inspired by anxiety that his radical views of capitalism would be used by the American right wing to tarnish his legacy. Which is very likely true.

So was King an actual socialist? When I ask this question, Honey points me to the 1952 letters to Coretta. “Well, it’s pretty clear there, isn’t it? He’s probably a “small ‘d,’ small ‘s’ democratic socialist, but he’s also a pragmatist who wanted to change things for poor people and bring them things like free college education and free health care.”

These are, of course, the very same ideas that many Americans cheered when they came from the lips of Democratic Socialist Bernie Sanders in his surprisingly successful 2016 run for president.

Honey emphasizes that King was first and foremost a Christian, and that he operated from a framework heavily influenced by the Social Gospel tradition, which began as a critique of American capitalism in the late 19th century when many religious people grew disgusted by the industrial conditions of poor and working class people. Honey writes that King’s father, also a minister, “saw his main mission as serving the poor…and passed that on to his congregation and his family.”

It might have once been true that King’s economic radicalism could tarnish his legacy, but in an era of rampant and rising inequality, that same aspect of his thinking might now serve to burnish it. Many contemporary Americans, Honey points out, are interested in a broad restructuring of society and eager to take on economic impoverishment along with mass incarceration, police brutality, and “the most pernicious aspects of both Jim Crow capitalism in the South and racial capitalism in the North.”

As the recent election results suggest, King the economic radical has renewed relevance, and Honey’s work helps to shift him from static icon to dynamic thinker whose vision can guide us in taking on the grossly unfair aspects of American capitalism.

Honey’s work suggests the true dimensions of King’s legacy and what realizing it would mean. If we are not serious about the redistribution of wealth and power, we are not fully honoring MLK.