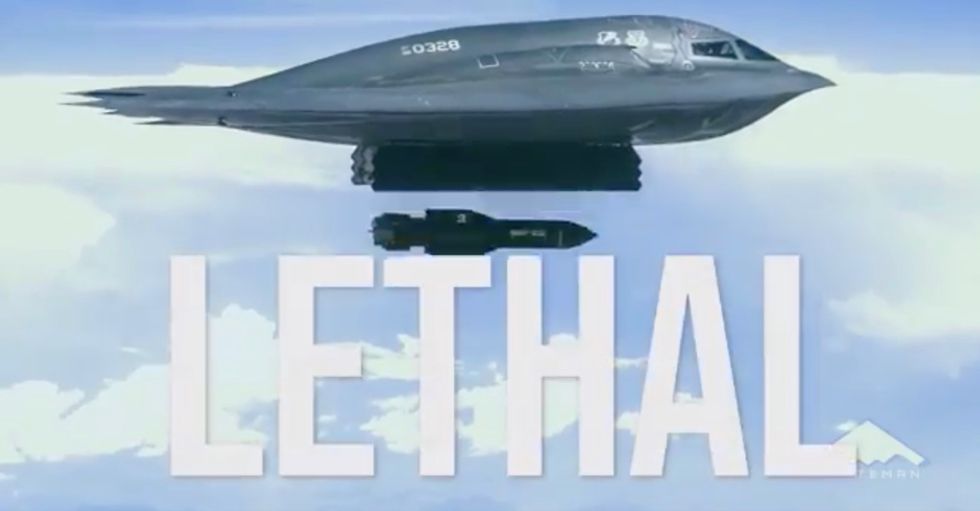 U.S. Strategic Command on New Year's Eve tweeted a video reminding the world America has nuclear bombs, but unlike the ball at the top of Times Square, it can "drop something much, much bigger."

That's literally the comparison they just made.

"Peace is our Profession" may be their motto, but USSTRATCOM, as the U.S. Strategic Command is called, didn't appear to stick to that message when they posted the video, complete with the words "Stealth," "Ready," and "Lethal."

Based in Omaha, USSTRATCOM "oversees everything from nuclear deterrence, command, control, and communications to intelligence and combating the proliferation of weapons of mass destruction," Gizmodo reports, "helpfully reminded the world on New Year’s Eve that it has the capability to bomb the world back to the stone age before 2019 rolls in."

The video ends with the dropping of a bomb, and a large explosion. It's unclear if the bomb was a nuclear device.

#TimesSquare tradition rings in the #NewYear by dropping the big ball...if ever needed, we are #ready to drop something much, much bigger.

"Take notice, enemies real and imagined," says Gizmodo, sarcastically mocking the tweets, "We want peace, and we’re willing to kill anyone for it."

The tweet with the video has just been deleted. The image at the top is a screenshot from the video, here's video of the tweet, including the video, someone else captured: