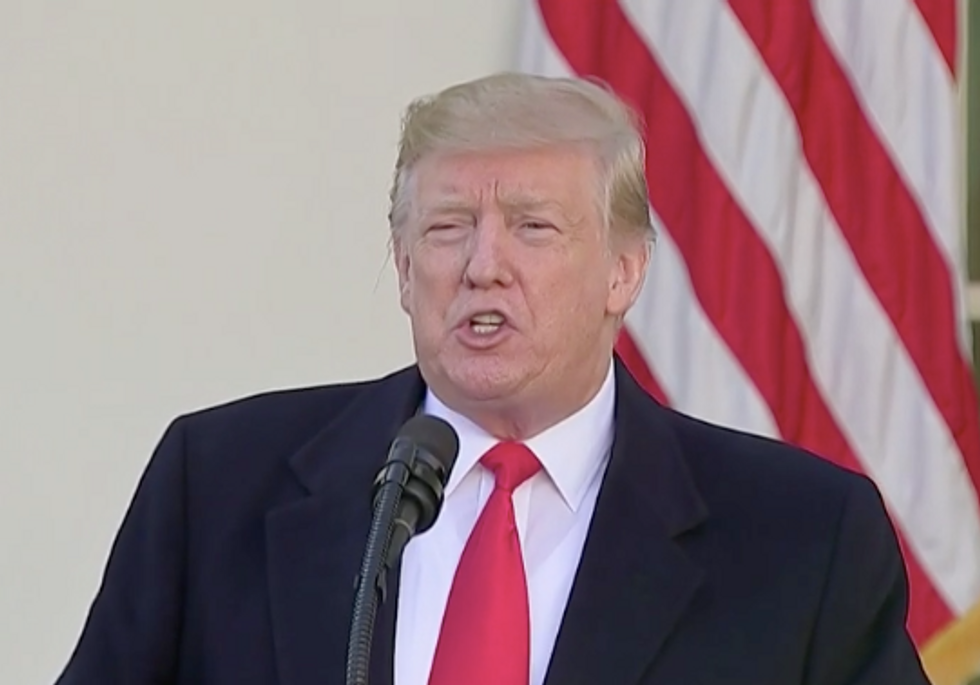 President Donald Trump announced Friday afternoon that he will sign a bill to reopen the government after a disastrous and pointless 35-day shutdown.

His announcement, delivered in the Rose Garden, was filled with lies and vicious anti-immigrant propaganda as he attempted to cast the end of the shutdown as a win for him. However, it was clear that the tactic was ended in disastrous defeat for his entire party: After the longest shutdown in American history, he was forced to concede to the Democrats' demand that the government should reopen without any wall funding.

He claimed that Democrats have finally coming around to accepting that barriers on the border are necessary, but this is a complete lie. The Democratic Party has long supported some barriers at the border, but strongly opposed Trump's ludicrous border wall — particularly when it was promoted with Trump's slanderous disinformation about immigrants. They were willing to vote for funding to pay for increased "border security," but Democrats refused to pay for the "wall" — which is why Trump shut down the government.

Now, he is trying to pretend that the existing fencing along parts of the border is the same thing as his proposed wall — even though, if this is true, his entire campaign based on the false idea that a massive border "wall" was the only to finally address undocumented immigration, would be revealed as the scam that it was.

So in the end, Trump hasn't moved the policy debate anywhere beyond where it was near the end of December when he decided to shut down the government. The only thing that has happened in the meantime is that House Speaker Nancy Pelosi completely humiliated him, vital government functions were allowed to grind to a halt, hundreds of thousands if not millions of workers went without pay, families and communities suffered under the strain, the presidential approval rating plummeted, and trust in American institutions further eroded.