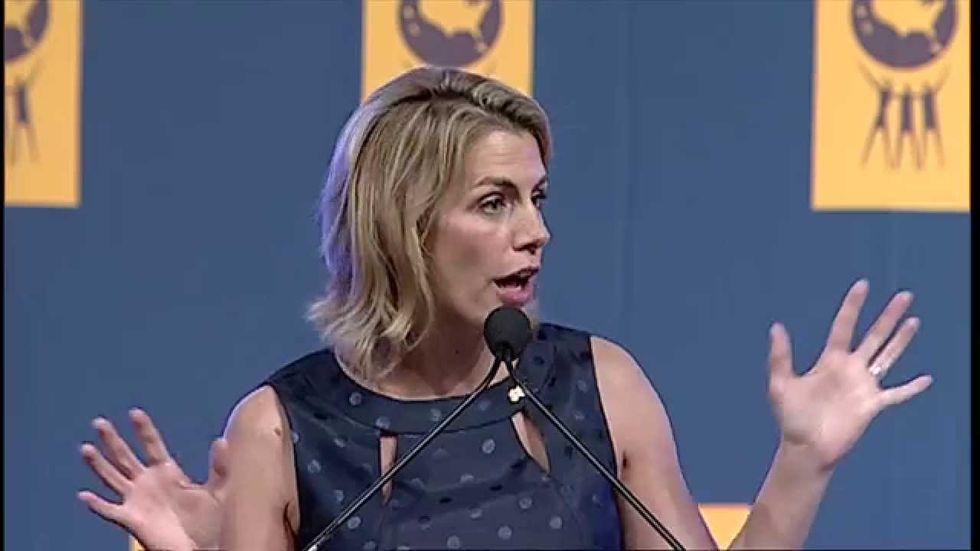 The single most important speech given about labor in decades was easy to miss last week. It was given by a woman who, like Rep. Alexandria Ocasio-Cortez, is a leader evidently guided by an internal moral compass that transcends conventional politics. That consciousness is a real threat to a status quo almost entirely defined by men.

The Joe Bidens of the world — in politics and labor — just have to let go if the Republic is to endure and the planet is to survive.

The world built by male patriarchy is in convulsions. It took every bit of focus to keep up with the breaking news: the pre-dawn raid by armed (unpaid) FBI agents on the home of a sleeping Roger Stone;  the near collapse of our air traffic control system;  and the epic humiliation of President Trump by Speaker Nancy Pelosi.

And that was just Friday.

Yet, the Jan. 20 impassioned speech given by Association of Flight Attendants CWA  International President Sara Nelson deserves not to be lost in that blur because it grasped the potential power of organizing a national general strike in support of 800,000 Federal workers and their families that the male dominated labor movement largely missed.

Nelson invoked the memory of Martin Luther King Jr., who, himself was willing to take risks on behalf of the labor movement, as he did by coming to Memphis on behalf of striking sanitation workers.  “Almost a million workers are locked out or being forced to work without pay. Others are going to work when our workspace is increasingly unsafe,” she said. “What is the Labor Movement waiting for?”

The occasion of her speech was her acceptance of the 2019 AFL-CIO MLK Drum Major for Justice Award in Washington, DC.

“We need to follow Dr. King’s lead and think big,” Nelson said. “Think big like the hotel workers who took on the largest hotel chain in the world and won. Think big, like the teachers in Los Angeles who this very minute are taking on powerful hedge funds to save public education for our children.”

She continued, “Federal sector unions have their hands full caring for the 800,000 federal workers who are at the tip of the spear. Some would say the answer is for them to walk off the job. I say, “what are you willing to do? Their destiny IS tied up with our destiny — and they don’t even have time to ask us for help. Don’t wait for an invitation. Get engaged, join or plan a rally, get on a picket line, organize sit-ins at lawmakers’ offices . . . . Go back with the Fierce Urgency of NOW to talk with your Locals and International unions about all workers joining together — To end this shutdown with a general strike.”

So, just where has this kind of passion harnessed by a fiery intellect like Nelson's been in the American labor movement? Not long after her speech Trump's  month long shutdown began to cause the air traffic control system to crack and prompted every one of the former Department of Homeland Security secretaries, including Trump's former chief of staff John Kelly, to write Trump and Congress that the nation's security was at risk.

What if we had seen hundreds of the nation's top labor leaders getting arrested with J. David Cox, president of the American Federation of Government Employees, who along with about a dozen others got arrested for sitting in front of Senate Majority Leader Mitch McConnell's office?

Can you imagine if it had been a mass movement by labor that had Trump crying "Nancy"?

What the extended shutdown exposed is that many Federal workers have the same kind of fragile household balance sheets as the rest of America’s working class. We limp from month to month, praying nothing happens to upend it all.

Labor needs the kind of collective action Nelson proposed to heal the years of damage done by Republicans that have pursued a successful strategy of pitting public sector workers, like teachers against everybody else. By targeting civil servants as the enemy, it takes the heat off their billionaire patrons that want to see the American labor movement finished off because its all that stands between them and having it all.

They already own big media and much of our political system. This corporate groupthink at the top has infected the courts where the legal community all too often does the blocking and tackling for capital against labor.

When Nelson appeared on MSNBC after that speech she wasn’t asked about her radical, but essential call for a general strike.  A convergence of America’s workers, private and public sector, is not something the corporate news media has any reason to promote and every reason to downplay. Just look at  the ratio of pay between the hosts and the production assistants.

Today, in the United  States the average CEO makes 350 times what the average worker earns. Compare that to the late 1970s when CEO pay was roughly 30 times the annual compensation earned by the average worker. No place is the CEO to average worker pay balance more obscene than in the very media conglomerates that would shape our worldview.

While the corporate business press hawks the “longest economic expansion ever’,  the wealth concentration accelerates and the income gap widens. At the same time, the labor movement continues its decline, a slide many trace back to the 1981 mass firing by President Reagan of the striking air traffic controllers.

American union participation fell to 10.5 percent last year. from 10.7 percent in 2017 and 2016 across all demographic categories. By contrast, in the early 1980s one in five American workers were unionized. And, it should come as no shock that there’s a direct historical connection between the decline in union enrollment, depressed wages and rising  inequality, that no matter which party is in charge continues to get worse.

And yet, American public support for unions is at an all time high. And, as we saw in the West Virginia teachers strike, its totally possible for a grass roots shoestring budget movement to upend reactionary ‘right to work’ politics — even in a state where Trump beat Clinton by 42 points.

But without the kind of courage and big picture vision of a Sara Nelson, this crop of six-figure labor leaders will continue to preside over a shrinking movement.