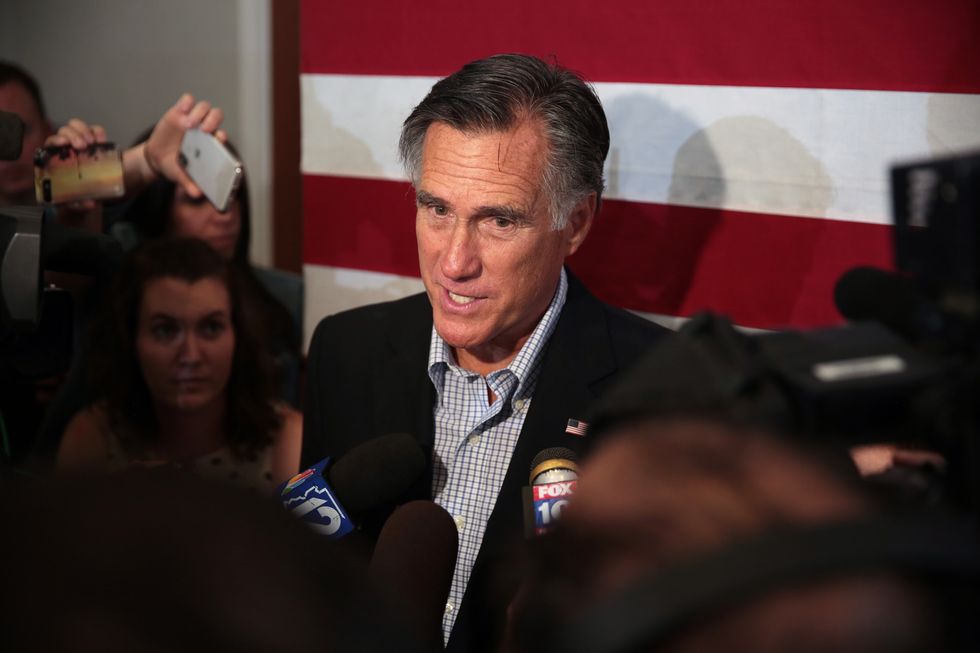 When Mitt Romney published a mildly critical op-ed in the Washington Post charging President Donald Trump with having a character that "falls short" of the demands of his office, many opponents of the White House were quick to cheer his entrance into their fold.

Anti-Trump conservatives, like Jennifer Rubin and Max Boot, were quick to praise the newly elected senator from Utah. There was a palpable hope that not only could he bring back some standards of decency to the federal government but that he might actually run a primary challenge to Trump and win back the soul of the Republican Party.

Sorry, folks. It's not going to happen, and the fantasy is dissolving even faster than expected.

Some were initially critical of the praise Romney received. Despite the critical posture adopted in his op-ed, Romney's actual critique of the president was pretty mild. He attacked the president's character — and no reasonable person could disagree — but he praised his policies, including with regard to the Chinese trade war, where many other Republicans have challenged Trump. He also gave himself an easy out for the future, saying he does "not intend to comment on every tweet or fault." He only said he will speak out against "significant statements or actions that are divisive, racist, sexist, anti-immigrant, dishonest or destructive to democratic institutions."

Well, the first test of this promise came and passed, and Romney failed miserably. When Trump announced last week he was considering declaring a national emergency, which doesn't exist, to procure funds for a border wall that he can't get from Congress, it was hard to imagine a clearer example of an action that would be anti-immigrant, dishonest, and destructive to democratic institutions. Even David French, a conservative writer who favors building more barriers at the border, argued in the National Review that Trump's proposal would clearly violate the Constitution and established law.

And what did Romney have to say about it, as someone who has said he'll speak up against Trump and someone who actually has the power to hold Trump accountable? Nothing.

Jennifer Rubin had been hopeful that he might say something — and so she reached out to see if Romney's office would respond to a request for comment.

"Alas, my inquiry to the Republican senator from Utah’s office about the president’s ability to use emergency powers, to gin up an emergency to bypass the first branch of government, was met with silence," she wrote.

And this is not just a new senator being reticent to wade into a controversial public debate. On Jan. 4, Romney felt it was worth his time to criticize a freshman congresswoman who, while at a small celebration last week, said of Trump, "We're going to impeach the motherfucker."

"Rep. [Rashida] Tlaib took the politics of Washington deeper down the drain," Romney tweeted in response. "Elected leaders should elevate, not degrade, our public discourse."

But he made no mention on Twitter of the president's suggestion that he might grab power to obtain a narrow political end — a move Romney undoubtedly would have lambasted had President Barack Obama tried it. Nor did he criticize the administration's blatant lying about terrorism statistics to gin up fears about the border, another clearly anti-immigrant smear. Nor has he criticized Trump's dishonest and bigoted (and pointless!) Oval Office address.

The odd thing is that there seems to be no reason for Romney not to speak out against Trump. Other Republicans are doing it. He was a successful Massachusetts governor, and though he failed to become president in 2012, he was widely respected in his party and had essentially earned the status of elders statesman among the elite. Being Utah's senator is a victory lap for his political career, which should embolden him to speak out more forcefully when he wants to. Moreover, the people of Utah elected him knowing that he has opposed Trump in the past — and he has a much higher favorability rating there than the president does. Criticizing Trump shouldn't hurt his chances at re-election, which would only be gravy for his career as it is.

In other words, there's no apparent reason he shouldn't speak up against the president whenever he wants to. It seems, then, that Romney either doesn't care about Trump's proposed abuses of power, or he's just too cowardly to stand up to them. Either way, he's not the hero we are looking for.