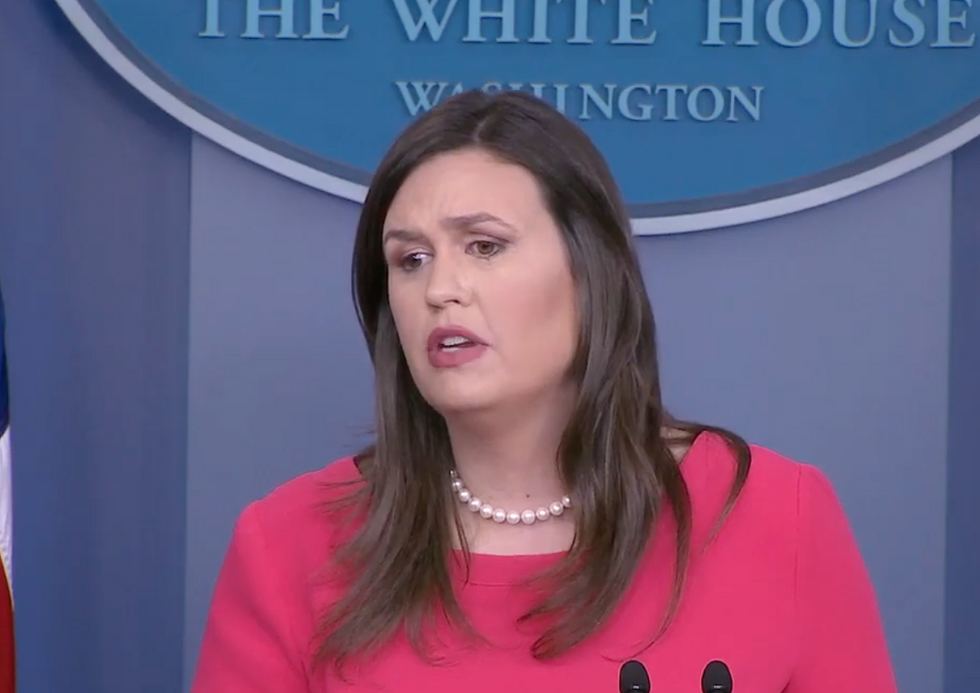 In her first press briefing of the year, Sarah Sanders yet again told a complete and utter lie about President Donald Trump's involvement in a new indictment handed down by Special Counsel Robert Mueller.

Sanders has continually spread falsehoods to cast doubt on the president's exposure in Mueller's probe. When asked on Monday by CNN's Jim Acosta if the continued indictment of so many close Trump aides and friends indicates that his presidency is in danger, she replied, "Nothing could be further from the truth. The more that this goes on, the more and more we see that none of these things have anything to do with the president. In Roger Stone's case, the charges of that indictment have literally nothing to do with the president and have to with his communications with Congress. So, in fact, I think the further we get into the process, the more and more we see that this has nothing to do with President Trump."

She added: "The president did nothing wrong throughout this process, and the charges of the indictment against Mr. Stone have nothing to do with the president."

This is all clearly false.

Consider one of the five charges of lying to Congress that Stone faces:

STONE testified falsely that he had never discussed his conversations with the person he referred to as his “go-between,” “mutual friend,” and “intermediary” with anyone involved in the Trump Campaign.

Unequivocably, being charged with lying about his contacts with the Trump campaign is directly related to the president — it's his campaign. It's not certain, of course, that this means Trump or his campaign members likewise committed criminal acts, but it suggests there was something going on between them and Stone that Stone thought was important enough to cover up that he would risk criminal charges. Further, the indictment alleges that Stone was in contact with a "senior" campaign official, bringing the charges even closer to Trump. One part of the indictment even mysteriously uses the passive voice to say a senior campaign official "was directed" to contact Stone. Since there are few people who a "senior campaign official" would plausibly take direction from, many speculate that this might refer to the president himself.

Sander's broader claim, too, that each development in the Rusia investigation shows "more and more" that it is unrelated to the president is also completely false. Paul Manafort, Trump's ex-campaign chair, was initially indicted for a swath of financial and foreign lobbying crimes which, though surely reflecting badly on the president, did not have a direct tie to Trump. But it has since been revealed that one of the subjects Mueller accuses Manafort of lying about to prosecutors is a meeting he had with Konstantin Kilimnik, a man believed to be linked to Russian intelligence. Manafort's lawyers have essentially admitted that he met with Kilimnik and gave him polling data related to the 2016 election — which directly ties his crimes to his role working for Trump.

More broadly, the consistent theme from indictments of Manafort, Stone, Michael Cohen, George Papadopoulos, and Michael Flynn has been lies that downplay the campaign's involvement with Russia. The fact that they have all been credibly accused of participating in a criminal cover-up to conceal these links directly relates to the president, who has also repeatedly lied about the extent of his dealings with the Kremlin.