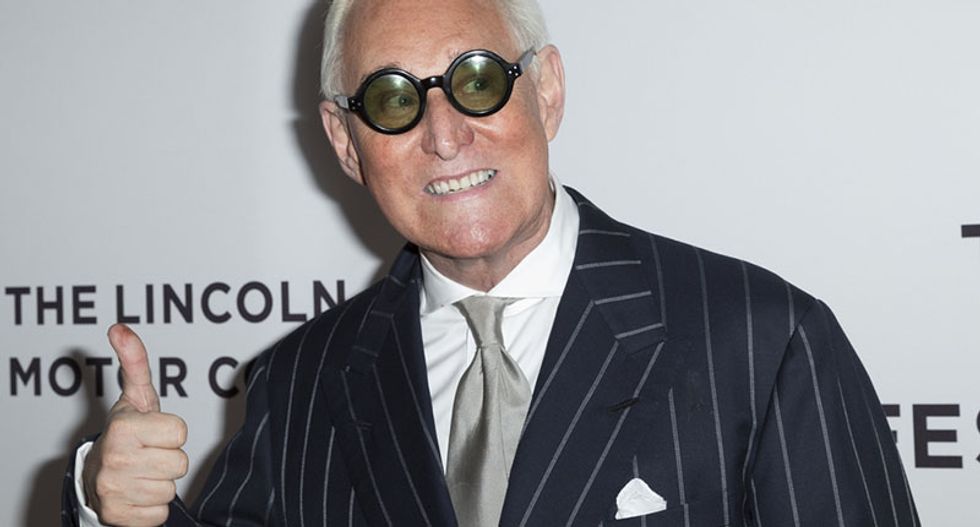 What could improve on being arrested by a squad of guys in tactical gear conducting a pre-dawn raid of your home? Having those guys work without pay for over a month because of a political stunt by the guy you helped put in charge. Trump adviser Roger Stone got that joyful experience on Friday morning, with a CNN camera crew and producer just coincidentally standing by to capture it all on film and make “He’s in his PJs!” one of the most smile-inducing sound-bites of the morning.

After a four-decade career of ripping through democracies, including helping to found—along with Paul Manafort—the consulting firm so beloved of dictators that it would become known as “the torturer’s lobbyists,” watching Stone led away to cool his heels at least until he faces a federal judge on Friday morning was a hopeful sign. And, while expected, the indictment against Stone focuses on his connections with WikiLeaks, it also shows that Stone remained in close communication with the campaign throughout the election. He coordinated an exchange of information between Trump’s team and the organization that served as a distribution center for information stolen by Russia.

The background information from the indictment recaps the basics: The DNC and DCCC were hacked by the Russians, WikiLeaks (“Organization 1”) served as a distribution point for that stolen information, and Stone informed the Trump campaign that WikiLeaks had information “that would be damaging to the Clinton Campaign.” Senior officials (plural) at the Trump campaign contacted Stone, asking him just what WikiLeaks had in its pockets. Somewhere around August of 2016, it began to occur to both Stone and WikiLeaks that broadcasting their connection wasn’t a great idea. From that point on, Stone reversed himself and claimed to have no direct contact with the organization. And when, after the election, Congress began to investigate the connections, Stone didn’t just deny his earlier statements; he leaned on another witness to try and stifle his testimony.

According to the indictment, “Stone thereafter told the Trump Campaign about potential future releases of damaging material by [WikiLeaks].” Which seems to make it clear that Stone remained a nexus of communication between Russia’s distribution agent and the Trump campaign.

Information that Stone provided concerning the WikiLeaks releases were detailed and far more than “guesses” about what was upcoming.

(Email from Jerome Corsi to Roger Stone on Aug. 2) Word is friend in embassy plans 2 more dumps. One shortly after I’m back. 2nd in Oct. Impact planned to be very damaging.

But the emails from Stone didn’t just include information from WikiLeaks; they created an entire narrative—a narrative that was picked up by the Trump campaign and by the right-wing media representatives with whom Stone was also communicating. That narrative also seems to have become key to the Trump campaign.

[Author’s note — the email was originally, incorrectly, cited as originated with Stone, but was actually communication to Stone from Jerome Corsi.]

(Email from Jerome Corsi to Roger Stone on Aug. 2) Would not hurt to start suggesting HRC old, memory bad, has stroke –neither he nor she well. I expect that much of next dump focus, setting stage for Foundation debacle.

Four days later, that email was followed by these tweets from Trump:

Aug 6, 2016 01:11:50 PM Heading to New Hampshire - will be talking about Hillary saying her brain SHORT CIRCUITED, and other things!

Aug 6, 2016 09:24:43 AM Crooked Hillary said loudly, and for the world to see, that she "SHORT CIRCUITED" when answering a question on her e-mails. Very dangerous!

It seems clear that the information that Stone was sending back and forth was being discussed and integrated into the Trump campaign. By communicating the same information to right-wing media sources (including AM radio host Randy Credico, whom Stone pressured to lie to investigators), Stone helped create a ready narrative that flowed from Trump’s tweets to Fox News.

The “sick Hillary” theme was something that the Right would return to over and over. But there’s an interesting question about this and other strategies proposed by Stone: Did Roger Stone originate these ideas, or were they strategies fed to him by Assange or other sources?

It’s going to take some time to slot every exchange with Stone into the timeline of events and statements from the Trump campaign—but it’s very clear this is worth the effort. Even though he wasn’t officially part of the campaign in 2016, it is clear that Stone still had an incredible amount of influence within the campaign and within the media, setting both the tenor and the tone for the campaign and its coverage.

It’s also clear that when Stone was cornered, and information began to come out, he was ruthless in his response.

(Email from Stone on April 9, 2018)  You are a rat. A stoolie. You backstab your friends-run your mouth my lawyers are dying Rip you to shreds. … I am so ready. Let’s get it on. Prepare to die [expletive].”