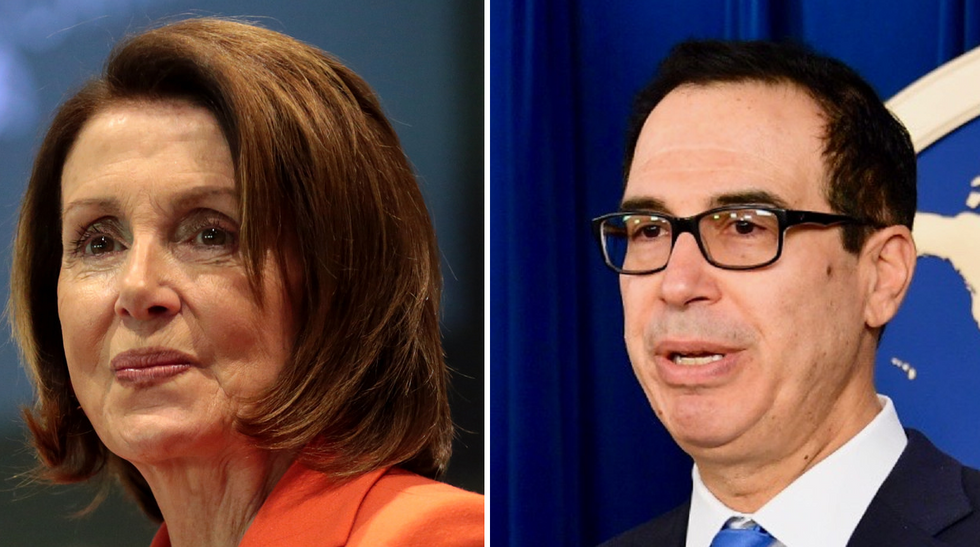 And according to a furious House Speaker Nancy Pelosi (D-CA), the whole thing was basically a farce that gave Congress none of the insight or answers that House Democrats were seeking:

The issue at hand in this hearing, one of the first undertaken with House Democrats' new investigative authorities, was why the Treasury Department decided to lift sanctions against three Russian businesses — energy companies EN+ and JSC EuroSibEnergo, and aluminum company Rusal — owned by oligarch Oleg Deripaska.

The New York Times reports that the Trump administration was oddly wary of implementing these sanctions in the first place:

The Treasury Department delayed the implementation of the sanctions several times amid an aggressive lobbying campaign by Mr. Deripaska's corporate empire. The administration ultimately decided to lift the sanctions in the waning days of the last Congress — timing seen as intended to reduce the likelihood that Congress might block the move.

But the decision has provoked backlash given Mr. Deripaska's close ties to President Vladimir V. Putin of Russia and the fact that Mr. Trump's campaign remains under investigation for possibly coordinating with Russian efforts to interfere with the 2016 presidential election. Mr. Deripaska had business dealings with Paul Manafort, Mr. Trump's former campaign chairman, who has been convicted of or pleaded guilty to an array of charges stemming from the special counsel's investigation.

The sanctions against Rusal in particular would have been damaging to Russian economic interests, as it is the world's second-largest aluminum producer and does a lot of business in the United States.

With Mnuchin's reported dodge at Thursday's hearing, Congress is left without answers as to why this key decision was reversed.