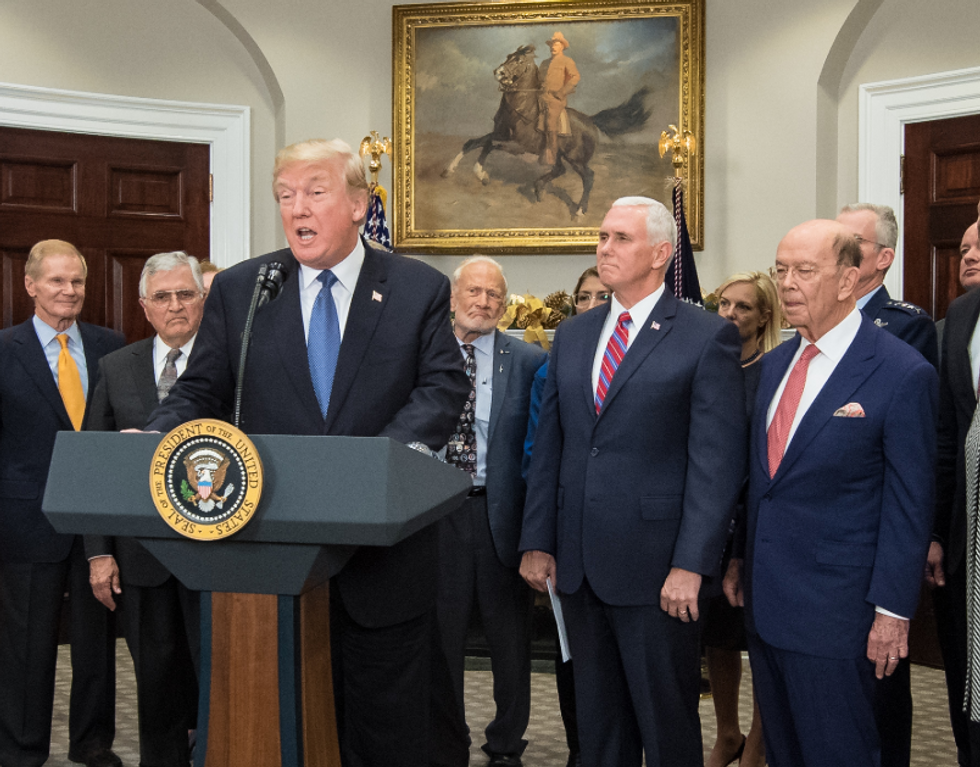 While President Donald Trump and his allies are trying to blame Democrats for the government shutdown that the White House clearly created, there's a tell in their rhetoric that shows they know they're lying: They keep trying to diminish the severity of the shutdown and its impacts.

Democrats, on the other hand, keep calling for the government to be reopened, showing that this is their main priority while pointing out how destructive the process has been for federal workers.

As the administration tries to win the messaging war, it keeps stepping on its own feet and insulting the federal government's workforce, revealing their own class biases and disregard for working people.

Here are seven times Trump and his team have been preposterously tone deaf about federal workers during the shutdown:

1. “It is a little bit of pain but it's going to be for the future of our country, and their children and their grandchildren and generations after them will thank them for their sacrifice.”

Lara Trump, the president's daughter-in-law, has been pilloried for diminishing the burden placed on federal workers by calling it a "little bit of pain." She has since claimed that her words were taken out of context, but what she said doesn't hold up much better with the full quote.

2. "Many of those workers have said to me and communicated, ‘stay out until you get the funding for the wall.’"

The president said, without evidence, that "many" federal workers have cheered on his shutdown in favor of the wall. He lies all the time, so it's easy to believe this is just flatly untrue — but it's also easy to believe that any federal workers who find themselves face-to-face with Trump wouldn't want to say to the president that his disastrous political gambit is hurting their families.

Claiming that the people you're hurting are on your side is an especially brazen and insulting move.

3. "I don’t really quite understand why” federal workers are using food banks.

Commerce Secretary Wilbur Ross, who is himself quite wealthy,  sparked a backlash when he expressed confusion about why federal workers — who aren't getting paid — would need to use food banks.

4. Larry Kudlow said that federal workers are now "volunteering" out of their "allegiance to President Trump."

Kudlow, director of the National Economic Council, feigned indignation when reporters pressed him on his patronizing characterization of federal workers doing their jobs without pay as "volunteering." Of course, volunteering is voluntary, but workers had no choice in the matter. And if they refuse to go to work without pay, they risk getting fired.

His claim that they're working without pay "presumably" out of their "allegiance to President Trump" is spectacularly callous. In fact, many federal workers are likely doing their jobs despite being furious at Trump for putting them in this situation.

5. "They have the vacation but they don't have to use their vacation days."

In perhaps the most desperate attempt to spin the shutdown as a good thing, Kevin Hassett, chairman of the Council of Economic Advisers, claimed that for furloughed federal workers, their virtual unemployment was basically a vacation. Of course, during paid vacations, you don't ever miss paychecks, and you know when you'll be back at work.

His claim also neglected the fact that for "essential" federal workers, who are forced to work without pay, and for federal contractors, who are out of work and will almost certainly never get back pay, this so-called "vacation" is more like a hostage situation.

6. "There’s no real reason why they shouldn’t be able to get a loan."

Ross, again, claimed that federal workers without paychecks should be fine because they can just get loans. Of course, this isn't necessarily true if someone has bad credit, or for federal contractors who are going wihout work but aren't guaranteed back pay. And even for those who can get loans to cover missed paychecks, they may still have to pay interest on those loans — interest that the administration doesn't appear to have any plans to reimburse.

7. “We’ve been watching the actual effects, and noticing that the impact that we see on government contractors is bigger than the sort of staff rule of thumb anticipated.”

Last week, Hassett revealed that the administration had wildly underestimated the negative impact on the economy of the shutdown. In part, it seems, that they didn't realize how many contractors support the federal government. This shows the administration's disrespect in two ways — barrelling forward with a shutdown without even understanding its full effects and undercounting the number of contractors who would be affected by the desperate tactic.