‘He didn’t shut it down’: GOP leader claims Trump never shut down government — and NBC's Chuck Todd crushes him 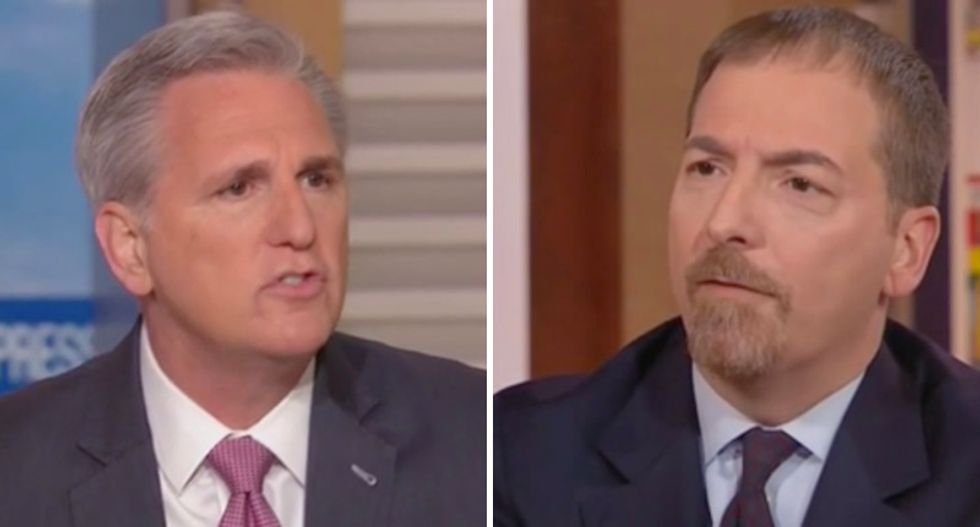 House Minority Leader Kevin McCarthy (R-CA) claimed on Sunday that President Donald Trump never shut down the government, even though the president took responsibility for the recent shutdown.

During an interview on Meet the Press, McCarthy suggested that it has been Senate Minority Leader (D-NY) who shut down the government because he refused to support Republican bills to fund Trump’s border wall.

NBC host Chuck Todd pointed out that those Republican bills were brought up after Trump “shut down the government.”

“He didn’t shut it down!” McCarthy said of Trump.

“He’s the one that said he’d be proud to own it,” Todd interrupted. “Who else did it? He rejected the Senate bill to keep the government open.”

“No, no,” McCarthy replied, attempting to revise history. “The House had a bill, the Senate had a bill. Like every other piece of legislation, it takes 60 votes in the Senate. Republicans don’t have 60 in the Senate.”

“If it takes 60 votes in the Senate, there’s probably blame on both sides,” the minority leader opined, ignoring the fact that the Senate had passed a bill to keep the government open.

Watch the video below from NBC.