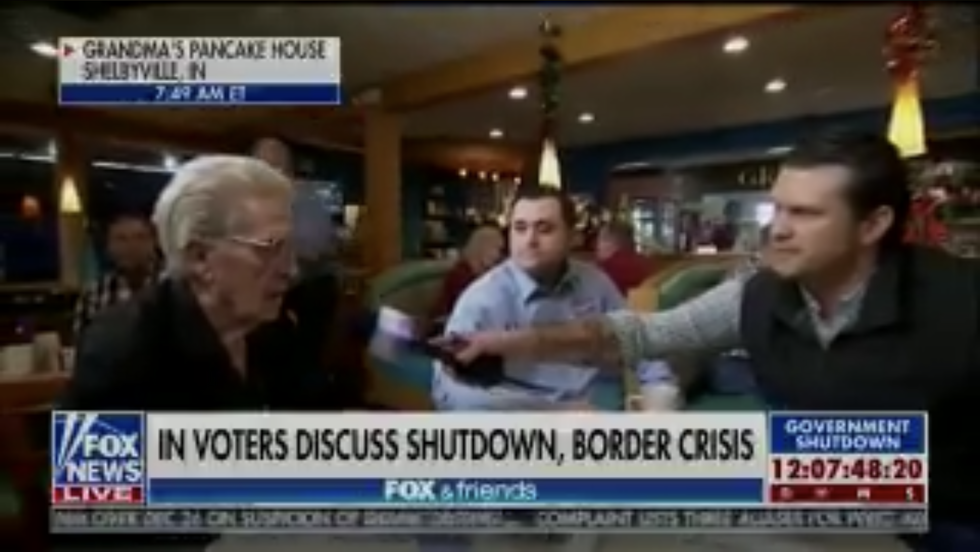 On Thursday, Nancy Pelosi is set to be officially sworn in as Speaker of the House, and she and her new Democratic majority will immediately go toe to toe with President Donald Trump as he attempts to use his government shutdown to browbeat border wall funding out of Congress.

But while some Trump supporters clearly feel confident they can win this fight, some of that confidence might come from a misbegotten idea of what the president's powers are in the first place.

On Thursday, "Fox & Friends" host Pete Hegseth visited Grandma's Pancake House in Shelbyville, Indiana, a conservative Indianapolis suburb where voters in the county backed Trump by 71 to 24. And after he asked local Trump supporters for their opinion on the new Democratic House, he was forced to give an awkward civics lesson to one particularly confused elderly man named Phil, who seemed to be under the impression that Trump could just dismiss Pelosi and House Democrats at will, like contestants on NBC's "The Apprentice."

"I'm expecting to wake up some morning and find Fox News — Trump on there, pointing his finger, 'You're fired, Democrats,'" said Phil.

Hegseth and several other diners burst out laughing. "Maybe that needs to happen, right?" Hegseth joked. After Phil registered confusion and a lack of confidence about being on TV, Hegseth explained to him, "We'll see. He can't fire the Democrats, but he can stare them down, and that is the big question here — will the president stand firm in a showdown?"

Fox News sent @PeteHegseth to a diner in Indiana to get great political insights like this https://t.co/42icUwG5rs
— Aaron Rupar (@Aaron Rupar)1546520304.0

It should go without saying that the President of the United States cannot fire members of the other branches.

But some Trump supporters seem shaky on other constitutional principles as well. One survey last August showed 43 percent of Republicans believe Trump "should have the authority to close news outlets engaged in bad behavior," a clear violation of the First Amendment.