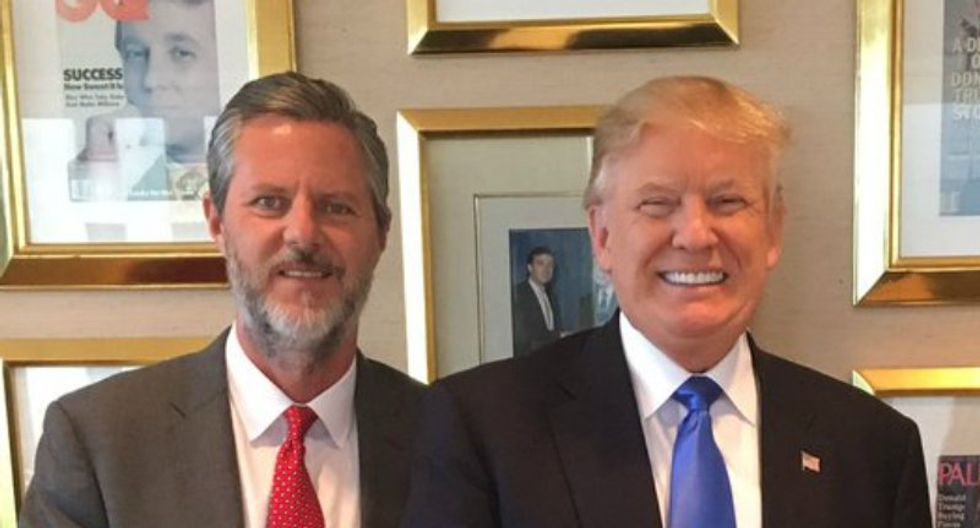 Ok, evangelicals do have a brand problem—but they also have a major product problem.

Bible-believing born-again Christians, aka evangelicals, have had a brand problem since Jerry Falwell’s Moral Majority sold the born-again movement to the Republican party in exchange for political power a generation ago, forging the religious right.

The Republican party has been using Christianity’s good name to cover bad deeds ever since, all the while tapping evangelical media empires and churches as communications and organizing platforms to bring ordinary believers along with the merger. Having become true-believers themselves, Evangelical leaders have offered themselves up as trusted messengers for this New-and-Improved political gospel project.

And it has worked.

Born-again Christians haven’t given up their core beliefs: that the Bible is the literally perfect word of God, Jesus died for their sins, and folks who don’t accept this gift will burn forever in Hell. Rather, most white evangelicals (and a number of blacks and Hispanics) have appended parts of the Republican policy agenda and the underlying conceptual framework to this list. Religious beliefs and political beliefs have become, for many evangelicals, indistinguishable objects of devotion, beyond question. Political tribe and religious tribe now have the same boundaries.

When I outlined evangelicalism’s brand problem in early 2016, few of us had any idea how bad it could get. Now the world associates the term Evangelical with the Trump election—over 80 percent of evangelicals gave him their vote—and with the candidacy of theocrat, Roy Moore, who despite credible allegations that he pursued and pawed young teens while an assistant district attorney, received comparable support from white Alabama evangelicals.

In the aftermath of Moore’s campaign and (merciful) defeat, the minority of Evangelical Christians who found him horrifying are doing some public soul searching—well, except not really. Many recognize only the brand problem and are, more than anything, simply scrambling to get away from the term evangelical itself. “After Trump and Moore, some evangelicals are finding their own label too toxic to use,” reports the Washington Post.  “The term feels irreversibly tainted,” agrees evangelical author Jen Hatmaker.

Jemar Tisby is president of a faith-based media company catering to black evangelicals, but he says that “It’s counterproductive to identify as evangelical. . . . What’s happened with evangelicalism is, it has become so conflated with Republican politics, that you can’t tell where Christianity ends and partisanship begins.”

At Wheaton College, my old alma mater, the executive director of the Billy Graham Center, Ed Stetzer, said, “I don’t want ‘evangelical’ to mean people who supported candidates with significant and credible accusations against them. If evangelical means that, it has serious ramifications for the work of Christians and churches.”

At Princeton University, the Princeton Evangelical Fellowship renamed itself Princeton Christian Fellowship to get away from the negative associations. But is evangelicalism tainting Christianity itself as a brand? Five years ago, Campus Crusade for Christ–which spends over $500,000,000 annually to recruit and retain evangelical college students–changed its name to the less transparent “Cru.” Mark Galli, editor-in-chief at Christianity Today, wrote of the Moore race, “There is already one loser: Christian faith...No one will believe a word we say, perhaps for a generation. Christianity’s integrity is severely tarnished.”

What even thoughtful evangelical leaders like Galli fail to recognize is that people shouldn’t believe a word they say—not about politics, not about morality, and not even about theology at this point. The problem isn’t skin deep. Their brand problem is a function of their product problem, and as Emmett Price at Gordon-Cornwell Theological Seminary put it, “Ditching a term is simply ditching a term.” Abandoning the term evangelical is the most superficial fix conceivable.

Real soul searching would mean asking what it is about the evangelical worldview that has made evangelical leaders and ordinary Bible-believers susceptible to courtship by authoritarian, bigoted, sexist, tribal, anti-intellectual greedmongers who dangle the carrot of theocracy. But few evangelical leaders are asking this question because that would mean revisiting the peculiar status they grant to the Bible itself. And that is off-limits.

When one treats the Bible as the literally perfect and complete word of God—which most Christian scholars don’t but most evangelicals do—it isn’t hard to find support for every item in the ugly list that now darkens the evangelical brand. The Bible contains some really bad ideas.  The opposite is also true, mind you. It also contains support for compassion, love, generosity, inclusion, and humility—and many other virtues that humanity values widely across both secular and religious wisdom traditions. The Bible is morally inchoate. It documents and sanctifies humanity’s moral infancy; and idolizing the book binds believers to the worldview of the Iron Age, leaving them susceptible to justifying all manner of misbehaviors in the name of god.

So, evangelicals have three enormous and interrelated problems with their product at this point. One is that their whole enterprise is built on an indefensible view of the Bible. This has facilitated the merger of biblical Christianity with Republican dogmas and will leave believers vulnerable to this kind of exploitation until the theology itself is fixed.

The second problem is that millions of Christians have now been so thoroughly indoctrinated into Bible-sanctified Republican ideology that it could take a generation to move them away from the beliefs and priorities that elected Donald Trump and nearly elected Roy Moore. It took a generation to bind them into this tangled web and there is no reason to think that journeying free will be easier.

The third problem is that this whole state of affairs has been a profound violation of trust. People trust religious leaders to be honest and moral, and when that is gone little influence remains. Young people who see through the mess are leaving evangelicalism and Christianity. They are losing faith in faith itself.

This much is clear. Simply swapping in the term Christian for the term evangelical will only damage Christianity’s brand at large, which evangelicals have already done—with help, of course, from the Catholic hierarchy. As a former evangelical Christian, now a spiritual non-theist, I don’t necessarily think of that as a bad thing, but Christians should. Some reformers are attempting real change from within evangelicalism. Tony Campolo, Rachel Held Evans, Rob Bell and John Pavlovitz, to cite a few are fighting hard to save the soul of a faith they cherish. But a path to broad reformation remains unclear.