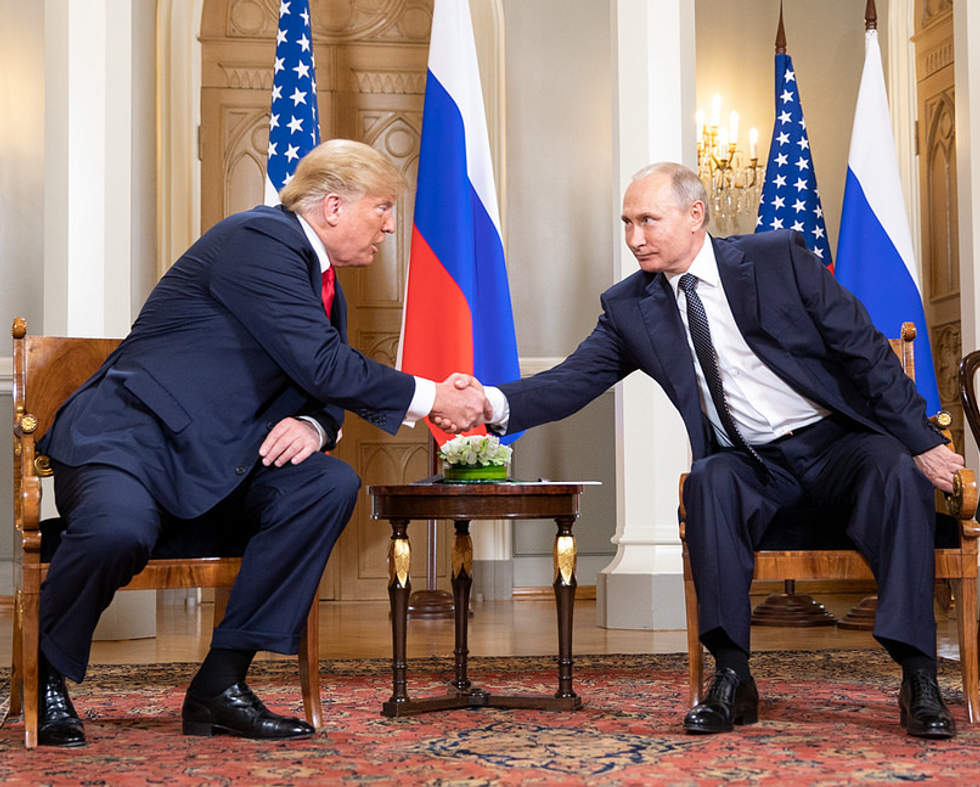 Despite the overwhelming influence of a convergence of interests between President Donald Trump and Russian President Vladimir Putin, many skeptics about a potential conspiracy or covert alliance between the two have argued that the Kremlin hasn't gotten much in exchange for its efforts to help Trump get elected.

While Trump has been rhetorically soft on Putin and has waged a public relations campaign against NATO, the some of the overt actions of his administration — launching missiles at Syria, providing arms to the Ukraine, and imposing sanctions on Russian invidiuals and organizations — have gone directly against the Kremlin's interests, these skeptics say. There has been some truth to these claims, though much of the aggressive action toward Russia has been driven by Congress and fought by the Trump administration.

But on Wednesday, the Trump administration took two major steps in line with Russia's interests that may help make all the effort Putin went to in supporting his candidacy worth it.

First, and most substantially, Trump announced, out of the blue, that the United States will be pulling out of Syria.

"We have defeated ISIS in Syria, my only reason for being there during the Trump Presidency," Trump said on Twitter. Officials have confirmed that planning is underway to withdraw troops.

As analyst Nick Patton Walsh explained, this was a big win for Putin's interests in the region.

"Without the US in the ring, Russia is the main military force in the post-war Syria," he wrote in a piece for CNN. "However you divine it, Trump seems to have few qualms about doing things that will please Putin."

The claim that ISIS is "defeated" in Syria, however, is overly optimistic. Martin Chulov, a Middle East reporter for The Guardian, explained:

The long fight against Islamic State looks good on a map, but it is yet to be decisive on the battlefield.

The terror group has lost more than 95% of the territory it claimed in 2014 and the juggernaut that threatened to shred the region’s borders has been battered back to where it all began for the group’s earliest incarnation – a sliver of land along the Euphrates River, bordering Iraq and Syria.

There, Kurdish-led forces, backed by US air support, have been fighting it out with diehard extremists in towns and villages in Syria’s far eastern Deir ez-Zor province.

At least 2,500 Isis fighters remain, all survivors of routs to the east and west of their last redoubt. Colossal ruin lays in their wake on both sides of the river. But the group retains the capacity to do even more damage, especially if let off the hook now.

Meanwhile, Trump's own Republican allies are extremely skeptical of his new announcement.

"Withdrawal of this small American force in Syria would be a huge Obama-like mistake," said Sen. Lindsey Graham (R-SC).

"The decision to pull out of Syria was made despite overwhelming military advice against it," said Sen. Marco Rubio (R-FL). "It is a major blunder.

The GOP has often been far too eager to wield the might of the U.S. military, and there may, in fact, be good reason for the United States to pull out of Syria. But ISIS being "defeated" is not one of them, and it is suspicious that the president primarily chooses to buck his party when it aligns with Putin's interests.

And despite the major stakes of the decision, CNBC's Christina Wilkie reports that a senior administration official is refusing to answer any questions about the "deliberative process" behind the Syria pullout. This sugests that there likely was no deliberative process — the president acted on his own.

"I've never seen a decision like this," said Sen. Bob Corker (R-TN) after meeting at the White House to discuss the decision. "For all involved, this was a major shock."

Others who are often critical of the president also found the move bewildering.

"Why would Trump do this now? Who knows?" wrote commentator Max Boot. "Given that he is acting at odds with his advisers, this is clearly not the result of a normal policy-review process. This is the Trump Doctrine in operation: Trump does whatever he wants. It could be based on what he had for breakfast — or there could be something more sinister going on."

Another move brought by the Trump administration Wednesday will likely mean Putin is going to be even more pleased with the president. The Treasury Department annouced Wednesday that it will be rolling back sanctions — passed by Congress as punishment for Russia's election interference — on entities tied to Russian oligarch Oleg Deripaska.

Ostensibly, this move was taken because Deripaska is divesting a significant portion of his financial stakes in these entities. However, there are serious reasons for concern about this action.

For one, Deripaska himself has troubling ties to the Trump campaign. Court filings show that Trump Campaign Chair Paul Manafort was heavily indebted to Manafort. And uncovered emails have shown that, during the campaign, Manafort reportedly offered his position within the Trump campaign as having the potential to resolve his debt to Deripaska.

But even leaving aside the shady Deripaska connection, the Treasury's move is troubling on its own terms.

As law professor Jed Shugerman pointed out, the entities buying up Deripaska's shares in the sanctioned businesses are themselves deeply suspicious. One of those entities, VTB Bank, has been named as a potential funder for the Trump Tower Moscow project the president was working on during the campaign. The other firm is Glencore.

"Glencore is being investigated for money laundering, and has been doing big business with Deripaska for years," noted Shugerman.

So after fighting Congress over Russia sanctions all along the way, the Trump administration is now rolling back some of these key penalties under highly dubious circumstances.

In response to the rollback of the sanctions, former federal prosecutor Mimi Rocah said: "So, the quid pro quo in plain sight."

It's not clear yet if there was an explicit conspiracy between Trump and Russians in the run-up to the 2016 election. But is clear that Putin had a strong desire for Trump to win — in part because he hated Hillary Clinton and in part because he thought Trump would be amenable to his interests. This Christmas season, it's clear Putin is getting exactly what he wanted.