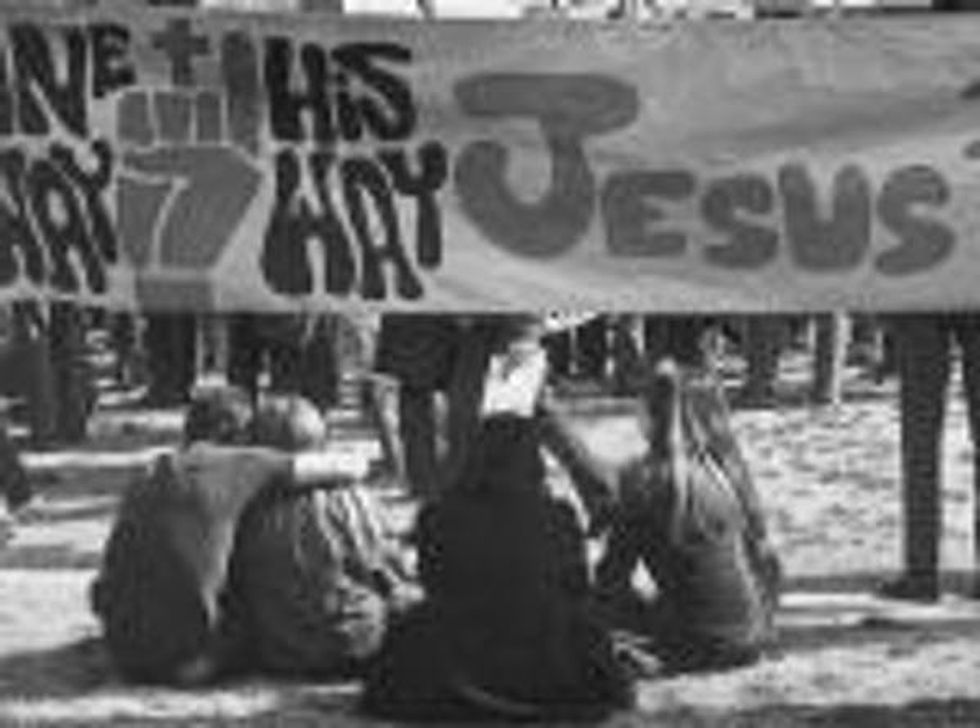 This year marks the 50th anniversary of the “Summer of Love.” Popular culture remembers the tens of thousands of joyous young hippies that descended upon San Francisco’s Haight-Ashbury district to celebrate personal expression, drug experimentation and easy sexuality.

What’s less known and what I discovered in my own research is that Haight-Ashbury also proved to be fertile ground for a startling new combination of the hippie style with conservative evangelical Christianity – the “Jesus People.”

The reasons behind the rise of the hippie movement were complex: A rejection of conformity and materialism in American culture and the emergence of a drug culture both played a part.

The 1960s counterculture also contained a decidedly spiritual dimension that attracted a great deal of hippie interest. The movement incorporated meditation, the occult, Native American spirituality and Eastern forms of religion such as Zen Buddhism and the International Society for Krishna Consciousness (“the Hare Krishnas”).

However, as writer and observer Charles Perry pointed out in his book “The Haight-Ashbury: A History,” the Summer of Love brought with it a number of problems including overcrowding, crime, sexually transmitted diseases and bad drug trips. Every night thousands of penniless young people would “crash” in whatever space they could find or simply sleep on the streets.

The problems became so bad that the leading hippie paper, “The Oracle,” advised anyone interested in coming to San Francisco to forget (in the words of a hit record from that year) the “flowers in their hair” in favor of bringing along a sleeping bag, warm clothes and money.

As many became disillusioned with life in Haight-Ashbury, a new set of hippie “Jesus freak” evangelists appeared in the Bay Area, urging people to follow Jesus Christ and forsake drugs and promiscuous sex. Key to this new presence on the streets was Ted Wise, a drug-using sailmaker, who in late 1965 was “saved” after one of his numerous LSD trips.

Along with his wife Elizabeth and several other hip couples, Wise began attending a local Baptist church.

The unconventional ways of these new believers antagonized many in the church. Wise and his group kept long hair, followed eccentric fashion and showed dissatisfaction with middle-class Christianity. One time Wise made a presentation on the music of Bob Dylan during a Wednesday night prayer meeting. But, as I found in my research, somehow, the hippies and the church people from the “establishment” managed to ride out their differences.

Drawn by nationwide publicity, somewhere between 75,000 and 100,000 youth came to Haight-Ashbury during the spring and early summer of 1967. Many became homeless, hungry and sick, and Wise urged Pastor John MacDonald to do something to help.

As MacDonald relates in his 1970 book “House of Acts,” he decided to tour San Francisco with Wise. He saw the packed streets and found that Wise “by dress and appearance” belonged and had “remarkable rapport” with the young people who had come to San Francisco that he “clearly did not.” MacDonald agreed that the need was great and that something had to be done.

With the assistance of several fellow pastors in the Bay Area, MacDonald helped Wise and his friends establish a coffeehouse called “The Living Room,” a block north of the intersection of Haight and Ashbury.

Over the next year and a half, thousands of runaway youth and hippie characters (including a man named Charles Manson later convicted for mass murders) came into the mission to talk with what MacDonald referred to as the “Street Christians.” Many others came simply to sip soup and coffee and eat donated doughnuts.

Spread of the movement

Meanwhile, others in the Bay Area such as Kent Philpott, a Baptist seminary student, and his hippie friend David Hoyt also began to preach on the streets.

By late 1968 they had opened a shelter called “The Soul Inn” in the basement of a small Baptist church in the city’s adjacent Richmond district.

Wise and his friends established a Christian commune in Novato, while Philpott and Hoyt (with the help of the pastors who had assisted The Living Room) put together a string of communes in San Rafael, Walnut Creek and other Bay Area communities.

By early 1969 this new-style interaction between hippie Christians and evangelical religion (particularly its Pentecostal branch) was happening elsewhere in the country in cities like Seattle, Detroit and Ft. Lauderdale. Hippies interacted with clergy and laypeople from the churches and committed themselves to following Jesus.

One particularly successful commune outside Eugene, Oregon, “Shiloh,” quickly grew to well over a hundred members. It acquired farms, and sent evangelistic teams across the United States in the 1970s to open new Shiloh communal houses.

But undoubtedly the hotbed of the movement was farther to the south near Los Angeles. There the Jesus People began to attract not only hardcore hippies from the drug culture and the streets but swarms of teenagers from youth groups belonging to the region’s churches.

Hundreds of independent communal homes, coffeehouses and Christian “fellowships” sprang up from San Diego in the south to Santa Barbara in the north between 1969 and the early 1970s.

Eventually, the presence of the Jesus People attracted national publicity. Coffeehouses with names like “The Belly of the Whale” and “The Upper Room” appeared from coast to coast. Underground “Jesus papers,” like Los Angeles’ “Hollywood Free Paper” and Chicago’s “Cornerstone,” helped carry the message onto the streets.

Photos of ocean baptisms involving hundreds of enthusiastic teenagers being plunged beneath the waves as a sign of their dedication to “follow the Lord” became a familiar sight.

By 1971, the movement had become the religious story of the year, capturing the cover of Time magazine.

One of the things that attracted youth to the Jesus People was their enthusiastic use of folk, pop and rock music. While many conservative churches had traditionally frowned on “worldly entertainments,” the Jesus freaks embraced their generation’s musical tastes.

Whether singing simple choruses in their gatherings, listening to guitar-strumming artists in coffeehouses or sponsoring full-blown Christian rock concerts, music was a central feature of Jesus People life. Jesus music festivals sprang up across the country in the 1970s.

One day-long festival in Dallas in June 1972, sponsored by the evangelical organization Campus Crusade for Christ (“Cru” today), attracted as many as 150,000 people.

By the late 1970s, however, the Jesus People had run out of steam. The hippie style grew less popular among teens. New styles of music and fashion came into vogue, and the Jesus People themselves grew older and moved on with their lives. But their impact lived on in a number of ways.

The success of the Jesus People and their sometimes grudging acceptance by older church members marked a major change in evangelical Christians’ attitudes toward popular culture.

The rock-fueled enthusiasm of the Jesus People for upbeat music created a “Contemporary Christian Music” industry and triggered controversial change in many churches’ worship styles and music. As the years passed, hymns, choirs and organs were increasingly replaced in many churches with “praise choruses,” “worship bands” and electric guitars.

The two largest Christian groups to emerge in late 20th-century America, the Calvary Chapel “fellowship of churches” and the Vineyard denomination, trace their roots to the Jesus People movement. Characterized by upbeat music, Pentecostal demonstrations of spiritual gifts and an informal “come-as-you-are” vibe, these two groups are today the largest institutional evidence to come out of the movement.

Fifty years after the Summer of Love, the Jesus People remain one of its lingering ironies. It was because of the Jesus People movement that numerous baby boomers remained anchored to conservative evangelical churches well into the 21st century.