BUSTED: Trump loyalist called out in real time on CNN for 'making up numbers' to support president's economic agenda 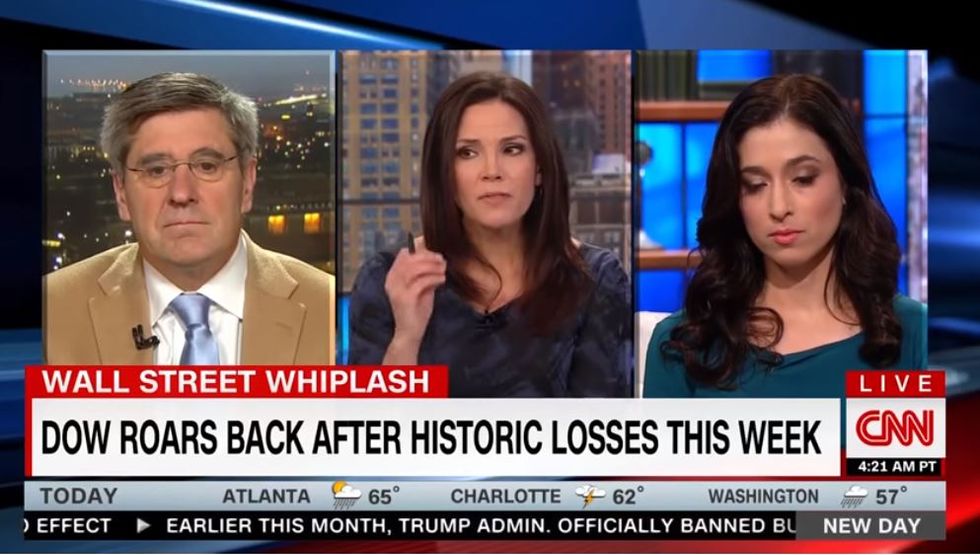 Washington Post columnist Catherine Rampell busted Trump-loving economist Stephen Moore on Friday when he falsely claimed that we are seeing vast “deflation” in the United States economy thanks to interest rate hikes by the Federal Reserve.

During a CNN appearance, Moore tried to maintain that the economy was as strong as ever, but he also blamed the Fed for tanking the stock market by raising interest ratesover the past several months.

“Both of the rate hikes were unnecessary and were a cause for deflation in the economy,” he said.

“Wait, wait, wait!” interjected Rampell. “There is no deflation!”

“Yeah there is,” Moore replied.

“No there is not,” she shot back. “Look at the Consumer Price Index!”

Moore tried to counter by noting that some prices on the Commodities Price Index had dropped — but Rampell hit back by saying that much of that was due to President Donald Trump’s trade wars.

“Soy bean prices are falling because of the trade war,” she said.

Rampell then nailed Moore for his false warnings during the Obama presidency that it was unwise for the Fed to keep interest rates low because it would lead to hyperinflation — despite the fact that the economy at the time was deeply depressed and much more in need of easy money.

“I’m old enough to remember when, ten years ago, during an actual deflation, you went on TV on a rival network and said we were about to have hyperinflation and told the Fed that it was irresponsible then to keep rates low,” she said. “It’s totally inconsistent and it’s totally irresponsible to make up numbers.”