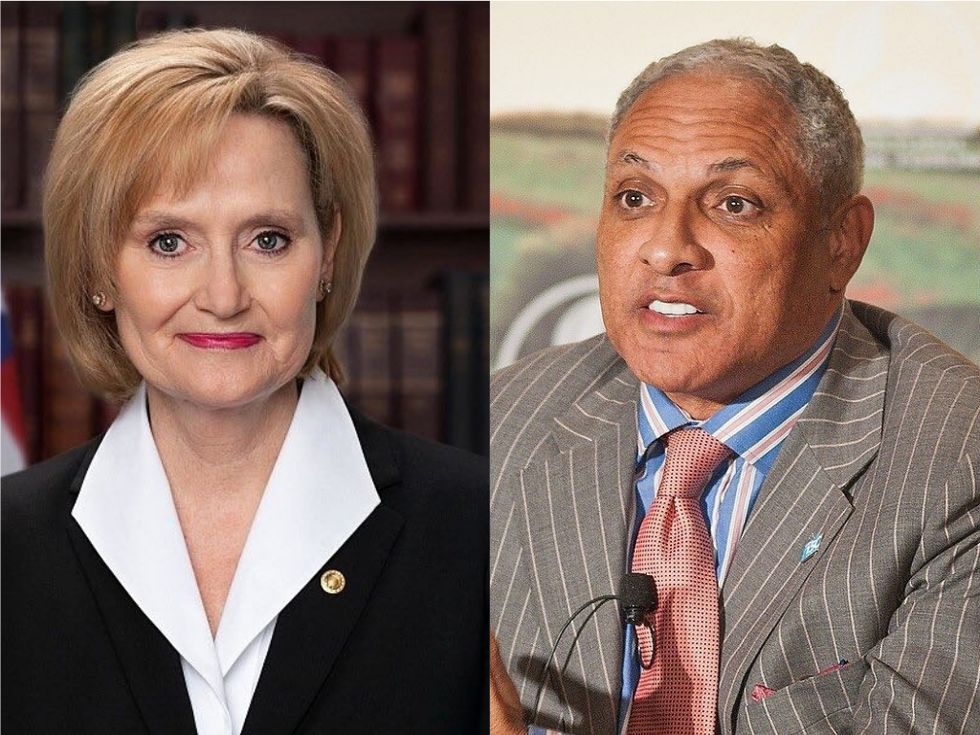 On Tuesday at 7 p.m. CT, at the Mississippi Farm Bureau Federation auditorium in Jackson, Republican Sen. Cindy Hyde-Smith and Democratic challenger Mike Espy will meet for a debate before the runoff election on November 27.

But the possibility of a major controversy occurring during this debate may not be likely. That's because, according to a report from the Jackson Free Press, the debate is carefully scripted in a way that benefits Hyde-Smith at every turn.

Per the report, Hyde-Smith demanded that there be no live audience or outside press in attendance. She also requested that the candidates have access to the podium notepads an hour before the debate. And she demanded that a planned segment in which the candidates would ask each other questions be changed, with the questions submitted beforehand and asked by the moderator. Hyde-Smith's campaign actually asked for even more accommodation, requesting she be allowed to bring in a binder of pre-existing notes, but was denied.

Every board member of the Mississippi Farm Bureau, which is hosting the debate, has donated to the Hyde-Smith campaign. According to the Free Press, President Mike McCormick and North Vice President Donald Gant contributed $500 each, while Central Vice President Ted Kendall gave $3,500.

The Espy campaign's communications director, Danny Blanton, has downplayed any concerns the format or the Farm Bureau is biased. "We have no concerns about whether she could get questions beforehand because I know all the panelists and the moderator," he said. “We're being very diligent to make sure this is a fair debate and no favoritism on either side."

But other sources gave the Free Press a more cynical view. "They have restricted this debate so much that if she bombs, it will be a miracle," said one source. Another characterized the debate as "rigged."

Hyde-Smith, who was appointed to her seat in place of ailing Sen. Thad Cochran and is now seeking election to serve out the rest of his term, has faced repeated controversies. She made a joke about public hangings, suggested it would be "a great idea" to disenfranchise college students, accepted a donation from a white supremacist, and posed in a photo wearing a Confederate soldier's hat. Amid the ongoing controversies, Republicans have expressed alarm at tightening internal polls.

Espy, a former congressman and Secretary of Agriculture, is running to be the first black senator to represent Mississippi since the aftermath of the Civil War. The race remains a tough haul for Democrats in a state Trump won by 18 points. But activists are hoping to pull off a repeat of last year's Senate special election in Alabama, where Democrats elected federal prosecutor Doug Jones over former state Chief Justice and accused child molester Roy Moore.

The debate between Hyde-Smith and Espy will be live-streamed tonight by the Clarion Ledger.