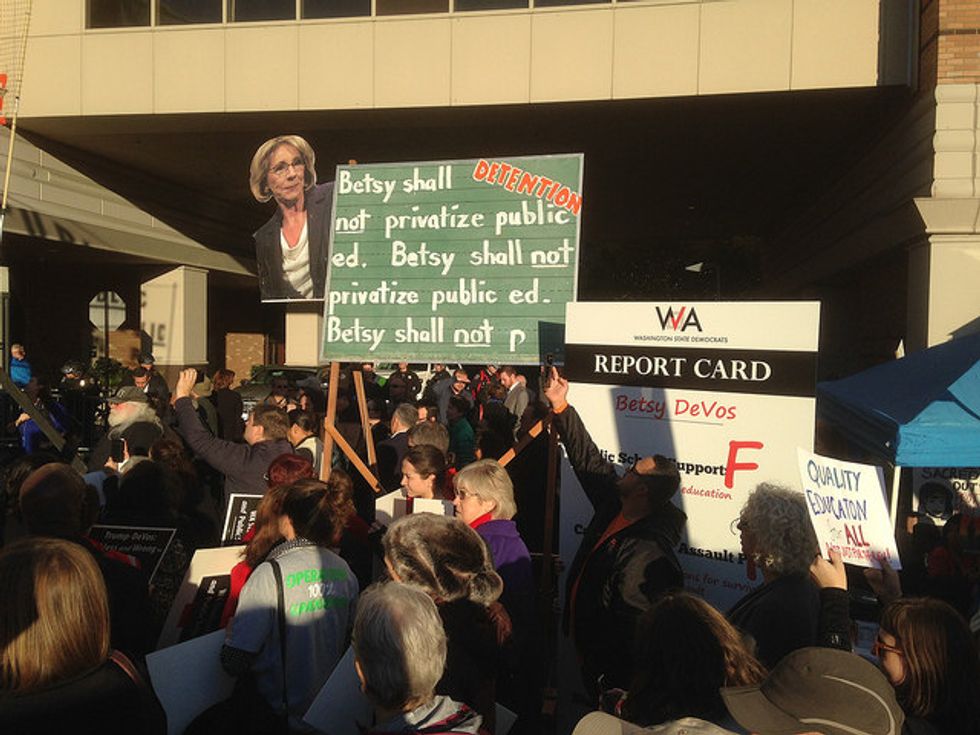 For years, the policy window for privatizing public schools has been wide open, and what was once considered an extreme or at least rare idea—such as outsourcing public schools to private contractors with few strings attached, or giving parents public tax money to subsidize their children’s private school tuitions—has become widespread as charter schools are now legal in all but a handful of states, and voucher programs have proliferated in many forms across the country.

Politicians of all stripes have been extremely reluctant, especially at the national level, to lean into a real discussion of the negative consequences of redirecting public education funds to private operators, with little to no regulation for how the money is being spent. Candidates have instead stuck to a “safe boilerplate” of education being “good” and essential to “the workforce” without much regard to who provides it.

But policy windows can be fleeting (remember “the deficit crisis”?), and multiple factors can rejigger the public’s views. Indeed, in campaigns that candidates are waging in the upcoming midterm elections, one can see the policy window on school privatization gradually shifting back to support for public schools and increasing skepticism about doling out cash to private education entrepreneurs.

It is the wave of new progressive candidates who appear to be the ones who are shifting the policy window on school privatization.

Take the campaign of progressive superstar Randy Bryce, running for the congressional seat Paul Ryan held in Wisconsin. The Badger State recently expanded statewide a voucher program that was confined to Milwaukee and Racine, and charter schools have expanded significantly under the leadership of Republican Governor Scott Walker.

On his website, Bryce provides the usual bromides about “every child deserves a quality education” and “charter, private and traditional public schools can all thrive,” but he then adds the curious statement that “no student should see money taken from their classroom in order to serve another.” What does that mean?

Click through the “learn more” prompt and you’ll watch a video in which he makes a much stronger statement about the problems of privatizing public schools. “We can’t afford two school systems, a public one and a private one,” he elaborates, and he blasts “vulture schools that don’t have the same accountability and don’t have the same rules.”

The example of the school he brings up that closed after head count day, and the owners “moved to Florida,” is a real school run by a husband-and-wife team who abruptly closed their Milwaukee private school, after taking more than $2.3 million of state voucher money, and moved to Florida to start another one.

These sorts of scandals have become nearly daily occurrences in the privately operated school industry.

The latest scandal breaks from Arizona, where the state auditor found that parents who used the state’s voucher-like education savings program spent more than $700,000 on cosmetics, music, movies, clothing, sports apparel, and other personal items. Some even tried to withdraw cash with the state-issued debit cards. The state has not recovered any of the money. But the state legislature recently passed a bill to expand the voucher program, which is now being challenged by a recall effort on the ballot on Tuesday.

Earlier this month, in Florida, the founder of a company that operated charter schools in seven counties was found guilty of using those schools to steer millions of dollars into his personal accounts. In one school district alone, “nearly 1,000 students were affected by the chaos and disruption that ensued.”

In California, a recent audit of a charter school found the married couple who ran the school made almost $850,000 in less than two years and secretly hired people and created positions without approval from the school’s board.

A video from Florida that went viral shows an African American boy being denied admission to a private school that his parents used public school voucher money to enroll him in. An enormous white cross adorns the school’s front lawn. This and other similar occurrences of discrimination by voucher-funded private schools in the Sunshine State has prompted the NAACP to call for an investigation into all private schools accepting vouchers. Around the same time, an op-ed appeared in a Florida newspaper recounting the scandal of a voucher-funded private school that stiffed teachers and skipped rent payments. Teachers filed formal complaints about a “lack of basic school supplies,” academic “irregularities,” student safety concerns, and inadequate staffing. But when the school was evicted, it simply moved to a new location and started the whole flimflam all over again.

In Georgia, a police investigation of a charter school found the governing board terminated the school’s leader, made no public announcement of the firing, and never told parents why. At another Georgia charter school, parents were told to “watch your bank accounts” after 6,000 school records were mysteriously transferred to a personal email account.

In Nevada, an analysis of the state’s charter school industry found they increase racial and economic segregation by enrolling far fewer low-income kids and far more white and Asian students than public schools do. A state audit of a charter school in New Mexico found tens of thousands of dollars have been stolen by the school’s employees.

One doesn’t need to “cherry pick” to find news stories about waste, fraud, abuse, and downright theft in the school privatization sector. The above examples all happened within the last month.

Of course, financial scandals happen in public schools too. That’s why they’re heavily regulated. But the notion that “parent choice” can keep charter schools and private voucher schools clean and honest is disproven nearly every day.

In Washington, D.C., there now seems to be an inkling to address the mountain of fraud created by charter schools and voucher programs. Prompted by a massive scandal involving an online charter school in Ohio, Democratic senators want the top watchdog agency for the federal government to investigate the business practices of online charter schools.

Their investigations can’t stop there. A recent analysis of states with the most charter schools and the most charter closures finds the federal government dumps millions into these schools but provides little oversight and guidance for what to do when these schools close, leaving millions of dollars in taxpayer money at risk to scamming.

The endless revelations of corruptions in the charter school and school voucher racket are now what’s driving policy, more so than dry, empirical studies about whether privatizing public schools “works” academically.

You can see that especially in the campaigns of progressive standouts like Andrew Gillum, who is running against Ron DeSantis to be the next governor of Florida, a state that is rife with charter school and voucher scandals.

While members of the family of U.S. Secretary DeVos are bankrolling the DeSantis campaign to push their agenda for charters and vouchers, Gillum is determined to stanch the flow of public dollars to the state’s many voucher programs and make charters more accountable for how they spend public money.

A review compiled by the Intercept of progressive candidates running for Congress singles out Leslie Cockburn running in Virginia’s 5th Congressional District. Cockburn opposes school vouchers and shows her skepticism for charter schools by noticing their problems with teacher turnover and their lack of oversight. At a recent meet-and-greet, she said, “We want more funding for public schools, not less. We need to not take away funds from public schools and give them to charter schools or private schools.”

Another candidate, Kara Eastman, running in Nebraska’s 2nd Congressional District, says on her website, “We must resist the administration’s political nominees who advertise the benefits of expanding charter schools.”

Among People’s Action’s endorsements in congressional races is Anthony Brindisi, running in New York’s 22nd Congressional District. Brindisi has pledged “to fight any and all attempts to privatize our public education system for corporate gain.”

A candidate endorsed by the Progressive Change Campaign Committee (PCCC), Dana Balter, running in New York’s 24th Congressional District, is a special education teacher turned Syracuse professor who got the endorsement of the powerful state teachers’ union largely because she “understands that giving money away to charter schools is not the right approach.”

Candidates for state houses have similar positions. In the race for West Virginia Senate 1st District seat that pits Democrat William Ihlenfeld against Republican Senate Majority Leader Ryan Ferns, Ihlenfeld says, “I am not a supporter of charter schools … I don’t think charter schools are a good idea for West Virginia. I don’t think we can afford to allow the private sector to come in and profit from precious education resources.”

Of course, some progressive candidates still stick to the old script of “investing in schools” with little regard to who runs them, and a few still cling to the school privatization cause. But the trend that made privatizing public schools an acceptable if not preferential policy has at least stalled, if not completely been thrown into reverse.