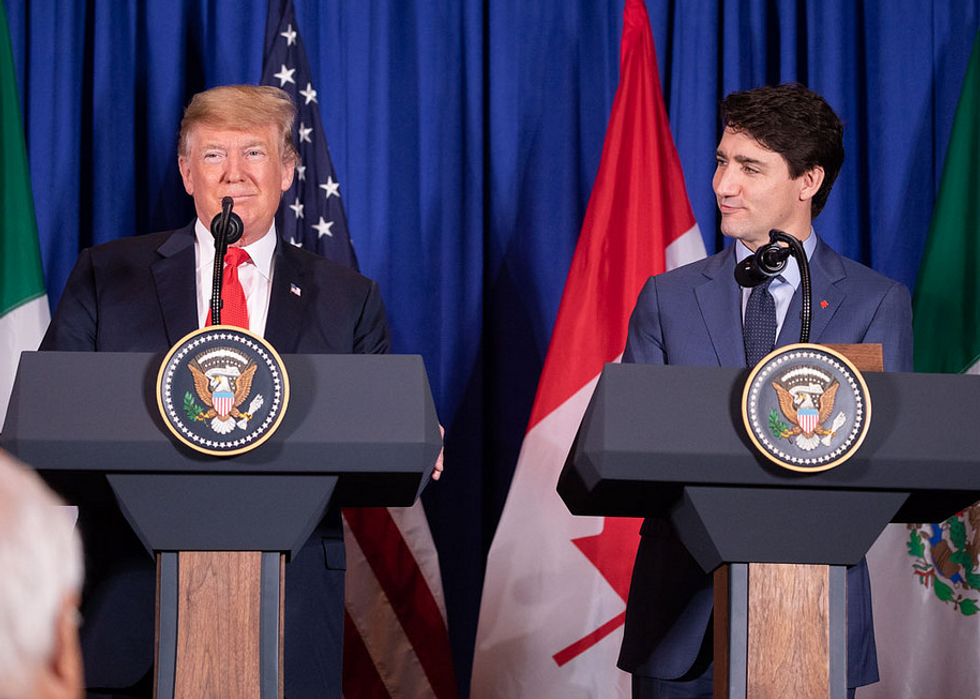 President Donald Trump has tried to claim renegotiating the North American Free Trade Agreement as a monumental achievement of his administration, but Canadian Prime Minister Justin Trudeau coldly undermined the president's ploy on Friday at a signing ceremony for the new deal.

As a candidate, Trump had decried NAFTA — signed by his opponent's husband — as the "single worst deal ever approved." He even threatened to pull out of the deal entirely.

Once in office, Trump tried to play hardball with his negotiating partners, but eventually, representatives from Canda, the United States and Mexico came up with some relatively minor changes to NAFTA that leave the basic structure of the deal in place.

Obviously, the fact that only minor changes were made isn't satisfying for Trump, so he has taken to denying reality, saying that he's gotten rid of NAFTA, and dubbing the new deal the USMCA (United States, Mexico, and Canada.) He appears to hope that this new name will dupe his followers.

But instead of adopting Trump's nakedly transparent branding strategy on Friday, Trudeau referred to the deal in his remarks as the "new North American Free Trade Agreement," as the LA Times pointed out. This was a subtle but pointed rebuke to Trump.

Trudeau also brought up the recent announcement by General Motors that the company will be closing several factories in both the U.S. and Canada, calling it a "heavy blow." Trump declined to mention the development at all, which has clearly embarrassed the man who promised during his campaign that no factories would close under his watch. Trump's economic adviser Kudlow said that the administration believed that changes to NAFTA would make this type of closures unnecessary, but the management at GM apparently disagrees.

And the Canadian prime minister hit Trump on one of the most strained features of the countries' relationship: Trump's tariffs.

"Donald ... we need to keep working to remove the tariffs on steel and aluminum between our countries,” Trudeau said.

Overall, the performance laid waste to the farce that Trump is a master dealmaker. His "new deal" is hardly new, is failing to live up to his promises, and leaves many problems of his own making left to be solved. It hasn't even been approved by Congress yet, and its fate remains uncertain.

And while Trudeau was standing in front of Trump, he decided to emphasize the American president's failures.