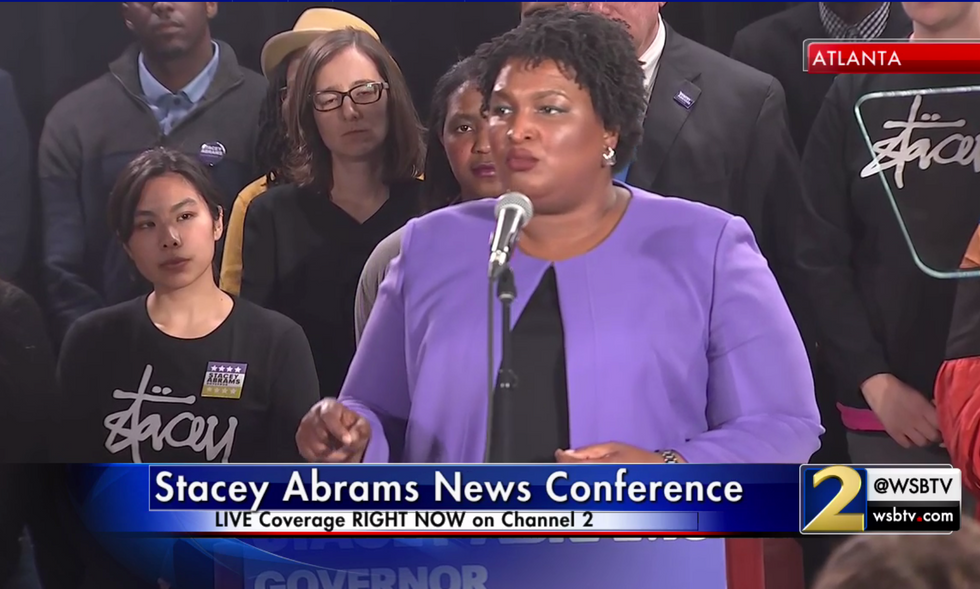 At every stage of the voter registration, ballot distribution, ballot validation and vote-counting process, a system of rules and state laws overseen by the governor-elect, Republican Brian Kemp—the top state election official until his resignation after Election Day—and State Election Board failed to help every eligible voter participate and cast a ballot that would be counted, the 65-page complaint filed in U.S. District Court enumerated in great detail.

“Without the right to vote, all other democratic rights are illusory,” the complaint begins. “In the 2018 General Election, Georgia’s election officials broke that compact. The Secretary of State and State Election Board grossly mismanaged the election that deprived Georgia citizens, and particularly citizens of color, of their fundamental right to vote. This complaint describes the serious and unconstitutional flaws in Georgia’s elections process—flaws that exist today.”

Whether validating voter registrations, using intentionally outdated state records to reject more current voter information to disqualify their ballots, purging voters under a 1990s state law intended to target voters who voted for president (but not in between), cutting early voting, closing or moving polling places in minority communities, having too few backup provisional ballots in place, or numerous other technicalities that added up to systemic rejection of ballots and widespread disenfranchisement, the suit said Kemp did everything he could to stop a free and fair election—including deploying intentionally racist tactics.

The lawsuit is filled with numerous outrageous examples. One of the most telling is how Kemp used a Georgia state law passed in 1994—in response to federal passage of the National Voter Registration Act, which required a range of government agencies led by motor vehicle departments to offer the opportunity to register to vote. Under that “use it or lose it policy,” any voter who did not vote in a three-year period could be purged and would have to re-register before voting again.

The complaint continues in that vein, saying these injuries violate several federal constitutional amendments and landmark legislation designed to stop racial discrimination. It seeks to have the federal courts put the state’s entire election system under federal “jurisdiction” or control, by blocking the most exclusionary laws and practices, and then lists 13 ways that the state should administer voter registration, training officials, uniformly running elections, ensuring backup safeguards are in place, publicly disclosing results and audits—and even replacing the state’s voting machines, among the oldest deployed in America today.

“Defendants’ failed policies and limited to no oversight disenfranchised untold numbers of voters,” it said. “The Complaint has detailed an extensive list of the systematic problems plaguing Georgia’s elections systems. Absent judicial intervention, future elections in Georgia will be no different.”

As compelling as the complaint is, that final assertion is not entirely true. When a jurisdiction has such a dismal record of election administration there is another remedy—it is political, not judicial. In Georgia, that possibility is around the corner, as next week the state has a runoff special election for Secretary of State. Democrat John Barrow, in a column last week in the Atlanta Journal-Constitution, pledged to make the state’s elections “safe, accessible and fair—to increase the ease of access and reduce the chance of fraud… we’re long overdue for a new and improved way of casting our votes.”

“I will work in these coming weeks to elect @Barrow4Georgia as our next Secretary of State – a man of principle and goodwill who will administer his responsibilities for the people – not his party. #gapol,” Abrams tweeted last week, days before filing the federal lawsuit.

It may be months or longer before the federal courts rule on Abrams’ suit. But between now and then, a political remedy is possible to address the very barriers put in place by Kemp: electing another Secretary of State who can undo those rules, directives and remake the system from the inside.